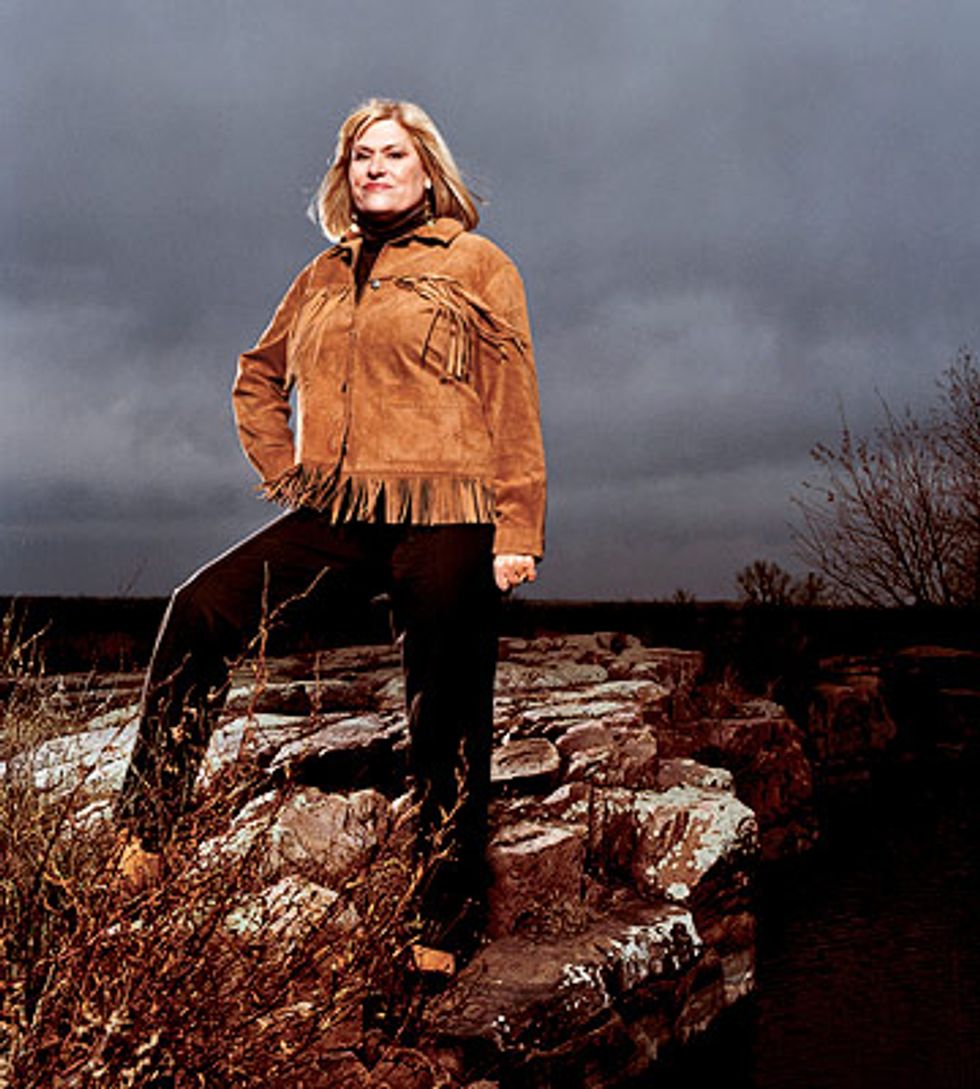 I can't believe I hadn't heard of this profile of Leslee Unruh---the woman who can take more credit than anyone for both the repeated attempts to ban abortion in South Dakota and for the "purity ball" branch of the abstinence-only movement---until Kay Steiger told me about it. And Kay's right that the journalist Amanda Robb does a remarkable job of humanizing this demonic force of misogyny, especially since Robb's very own uncle was a doctor who performed abortions and was murdered by some of Unruh's more fanatical and violent comrades. Unruh herself isn't a gun-toting misogynist, and Robb seems to think that Unruh sincerely believes that she's out to take away women's rights to abortion and contraception to help women. There's two competing views in the anti-choice community on women who control their fertility in order to have sex for bonding and pleasure. Diabolical sluts is the usual view, and while most anti-choicers at this point know they're supposed to have compassion for the wayward sluts, the sense that 95% of women are daughters of Eve out to dismantle society pokes through the fake compassion. The P.R. people realized at some point that they would do better with a "compassionate" view of women, which is to say that you frame women as creatures that are injured by freedom, because we're congenitally incapable of thinking for ourselves, and need strict guidance and restricting roles lest we injure ourselves by running around with scissors or hopping on random cocks. In this view, abortion and birth control have to be banned for women's own good, because we are too stupid to realize that we don't really want to have sex without having babies. Only by being forced to procreate against our wills will we realize that's what we wanted all along.

Robb seems to think that Unruh is a true believer in the "women as children" view, as opposed to the more grassroots popular "women as sperm-sucking demonspawn" view. And certainly, Unruh does seem very close to a true believer---if you've ever seen her talk in public, she's got the blank-eyed look and the sing-songy girlish voice of the Good Girl conservative woman down cold. She is what K-Lo wants to be. Her offices at the Abstinence Clearinghouse are decorated with tiaras and other princess gear, right down to a large statue of a knight in shining armor. You don't engage in that level of maudlin dipshittery unless you're a true believer. I'm sort of amazed at the idea that the hard right wing Christian assholes that the purity scolds have in mind as husbands for teenage girls that take virginity pledges are honestly, without a bit of irony, being promoted as fairy tale heroes. I don't think I need to explain the fundamental problem with that, though I'm sure said assholes enjoy imagining that their wives look at them that way, and laughing at how women are so simple.

But I digress. What's so fucking awesome about this story is that Leslee Unruh spins the strangest tale about her own abortion* in the 70s.

Unruh says that when she became pregnant with a fourth child, her obstetrician, Buck Williams, MD, recommended she abort.

Unruh recalls him telling her that the pregnancy might aggravate her Wolff-Parkinson-White syndrome, a condition which can cause rapid heart rhythm, fainting and, occasionally, cardiac arrest. She also felt that "the doctor thought he was doing me a favor," since another baby might be overwhelming -- an idea Unruh now considers absurd. "I don't remember feeling stressed out," she says. "I nursed my babies. I had my garden. I had natural foods."

And yet "in 1978 or 1979," she had the procedure. "I guess I wanted to believe there was something wrong," she concedes. But she is convinced she would never have aborted if the doctor had not (according to Unruh) lied about the facts of the process. "He called it a premenstrual extraction," she continues. "A D&C. There was deception." Williams, now retired and living in Arizona, won't comment except to say, "Well, she would say that. I hear she's a big antiabortion activist now."

Unruh says she immediately regretted ending the pregnancy (she would later have two more children). She says Allen's anger about the abortion -- which she told him about soon afterward -- is not what inspired that regret. Remarkably, she also insists she had no idea at the time that Allen Unruh had been giving antiabortion speeches throughout South Dakota, sometimes with John Wilke, MD, founder of the National Right to Life Committee and the International Right to Life Federation.

Problem with the story is that it's not true, starting with the most fundamental fact, who got her pregnant.

Where she was, exactly, can be maddeningly difficult to pin down. A 2003 Washington Post article reported that Leslee and Allen married in 1972. "Five kids, two of my sons are doctors," she told the paper. "Abstinence works, people. My daughter saved her first kiss for her wedding day. I'm here to tell ya." But according to Clark County, Nevada, marriage records, her name was Leslee Joy Kutzler (not Bonrud) when she married Allen Dale Unruh in a Las Vegas elopement. The recorded date of that marriage is November 17, 1978 -- five years after Nathan, her oldest, was born. Daughter Nakia and son Chace were born in 1974 and 1976, respectively. When I later contacted Unruh to clarify what seemed to be discrepencies in her marriage, motherhood and abortion history, her assistant responded via e-mail: "I talked to [Leslee] on the phone and your facts are wrong." After repeated attempts to speak directly with Unruh, I finally got a callback. Yes, she said, she had been married before Allen, to a man named Larry Kutzler. He was the father of her first three children. And she said she was pregnant with Kutzler's baby, not Unruh's, when she had the abortion. She said she was not yet married to Unruh at the time of the termination.

Kutzler, 57, a pastor in Minneapolis, is founder and executive director of CitySites Media, a ministry that uses media to spread the Gospel. In a brief phone conversation he declined to comment about his ex-wife. According to South Dakota Department of Health records, the couple was married on February 10, 1973 -- six months before Nathan's birth -- and they filed for divorce on September 15, 1977.

It's hard to say what happened, but now that we know that Unruh lied about when she was married and who got her pregnant and whether she was married when she had the abortion, I have to wonder if she's lying about other things. The doctor who performed her abortion claims that she's lying about his supposed lying---she claims he didn't tell her it was an abortion, he said that she'd say that, wouldn't she? Is it possible that Leslee Unruh, big proponent of the idea that women who have abortions are just broken children who don't quite understand, was actually closer to the diabolic slut of the usual anti-choice imagination? That she had an abortion because she didn't want to start her new relationship carrying the child from her old one? That, in other words, she knew what she was doing?

Maybe. Or maybe not---after all, there was a full year and 3 months between when her divorce was finalized and when she remarried. Still, if that's what she did, it's hard not to sympathize with that choice. After all, her new beau, now husband, was a hard right wing John Bircher, and an anti-choice activist. A man like that is very unlikely to see his girlfriend being pregnant by another man as anything short of an assault on his masculinity. Who wants to start off on a wrong foot in the new relationship like that? I mean, I can't for the life of me figure out why you'd want to share a cab with a Bircher, much less your body and your life, but once you're already there, it's understandable that you'd want to reduce the amount of drama in the relationship.

But there's other possibilities---divorce is stressful, and she claims that her doctor was worried that the stress of pregnancy and a new baby was adding too much stress to her life and causing her heart problems. That's entirely plausible, as well.

Either way, wouldn't it have been a shame for Unruh if she didn't have a right to that abortion? Either the loss of her much-vaulted marriage or perhaps the end of her health or even life.

*Of course she had an abortion. Wanna bet she won't turn herself into the law if she does get abortion criminalized in South Dakota?