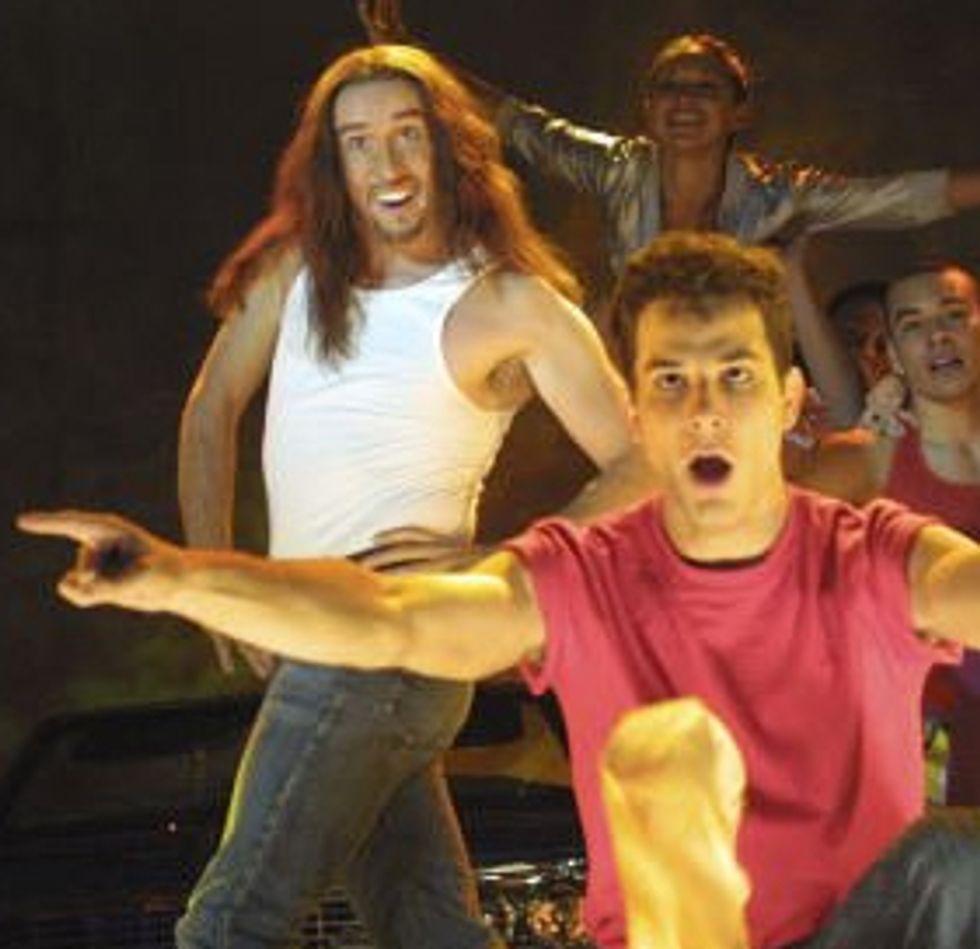 It's tempting to compare "Hamlet 2" to the sublimely ridiculous "Tropic Thunder". Both movies have Steve Coogan in them. Both rely heavily on actors who can really bring it to realize some pretty extreme characters (Coogan in "H2", Downey in "TT"). Both basically tell the easily offended, to quote Amy Poehler in "Hamlet 2", to suck a bag of cocks, though neither is actually out to attack people based on race or disability or anything like that. And both find their primary source of humor to be people who take movies (and theater) very seriously.

But actually, while I liked both a lot ("Tropic Thunder" will deliver a lot more belly laughs), I can totally see how they have divergent senses of humor, and people who like one may not like the other. "Tropic Thunder" is more broad satire. "Hamlet 2" mines the same territory you see in shows like "The Office" and "Curb Your Enthusiasm"---mortification as comedy. If you don't like those shows, you won't like "Hamlet 2". Drama teacher Dana Marschz is a character in the vein of Larry David and Ricky Gervais, someone whose life is a series of humiliations and social failures. I personally love that stuff, so I enjoyed this movie. Marschz is a self-obsessed recovery addict who has, hilariously, a really poor understanding of the art of drama he lays claim to. Because he's talentless and tasteless, he's relegated to living in Tuscon and teaching drama at a school that's indifferent to hostile, but I can't help but point out that stubborn mediocrity that thinks of itself as art is the driving force behind 90% of Hollywood's output.

Whatever you do, don't watch the musical numbers on YouTube before you see this movie. You'd be depriving yourself of the payoff. But the movie is solid beginning to end, especially since they don't belabor plot points, which is critical in movies that are based on comic characters. The plot is dispensed with quickly enough---school budget cuts mean both that Marschz has a lot of kids in his class for the first time ever (no other electives available) and that even his class is going to be cut. Knowing that he's going out, he decides to do one last play that he's written himself, a sequel to "Hamlet" where everyone lives. We're given just enough of what's in the play throughout the movie to get a) that it's wretchedly offensive and b) that Marschz isn't trying to hurt anyone's feelings so much as he just doesn't have boundaries. Considering that one of the writers also writes for "South Park", I'm guessing there's a little satire on the creators there.

The main weakness of the movie is that they hit you over the head with a couple of gags. Look, the audience brings enough cultural acclimation to see why people would oppose a song called "Rock Me, Sexy Jesus" without having a bunch of caterwauling (and for some reason, all female) Bible-thumpers rushing the stage. And the white girl in the class's racism is funnier when she's wary of her Hispanic classmates than when she drops the word "beaner". It wouldn't work so well if Coogan wasn't a masterful comic actor (like Robert Downey, Jr., actually), able to be completely over the top while selling you on some of the more subtle work of characterization. His American accent wasn't so great, but I actually think if you went into it thinking Coogan was American, you'd probably think the character was affecting an enunciation style to sound smarter than he is. I could see him being another Peter Sellers, honestly.

It occurred to me after leaving the movie that Coogan really likes being in movies that are about artists. The three movies I've seen him in---"Hamlet 2", "Tropic Thunder", and "24 Hour Party People"---are all about examining the underbelly of making art, some great ("24 Hour Party People"), most not. He's also been in "Tristam Shandy", which was a continuation of this theme on steroids, because it's actually a movie about making a movie of "Tristam Shandy", and Coogan plays himself playing the main character. It's a smart move to be in movies like this, since writers and directors know the subject well.

By the way, the director of "Hamlet 2" also directed a movie called "Dick" about a fantasy version of the Watergate scandal, a movie that's a lot better than it has any right to be. A good Netflix pick, if you haven't seen it.