McCain: I'll take a pro-choice VP, but not a pro-gay one 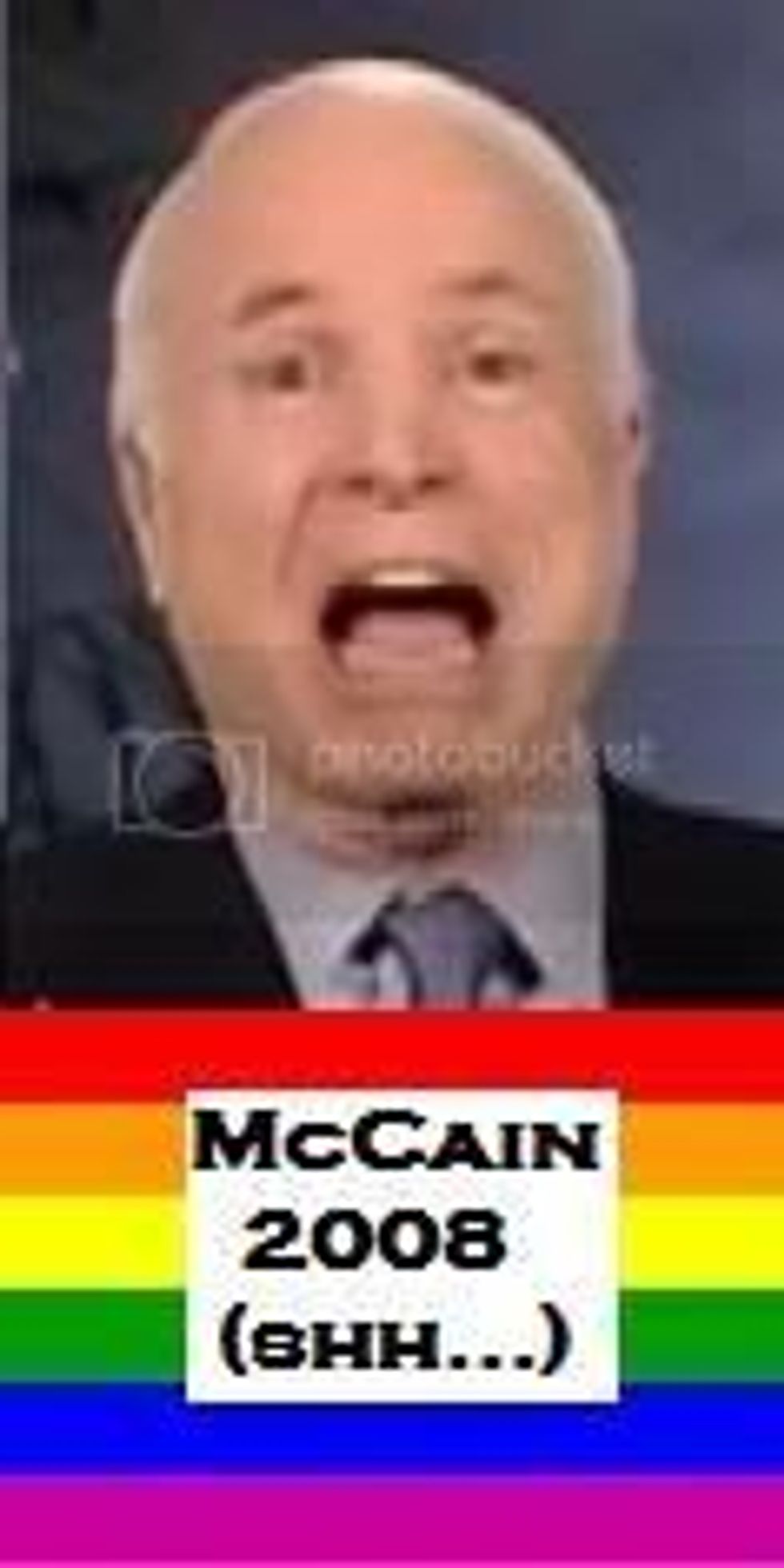 (NOTE: But John McCain will take gay money -- in fact, he took $2300 from the owner of the #1 online man-on-man cruising site. Read about that here. Will he give it back? Will the squishy-in-love-with-McCain MSM even cover this? Do pigs fly?)

As John McCain mulls over his short list, which includes Joe Lieberman, Tom Ridge, Tim Pawlenty, and Mitt Romney, he was asked about whether the pro-choice positions held by Holy Joe and Ridge (and Romney at one time) would be a problem for him.

"I think that the pro-life position is one of the important aspects or fundamentals of the Republican Party," McCain said. "And I also feel that--and I'm not trying to equivocate here--that Americans want us to work together. You know, Tom Ridge is one of the great leaders and he happens to be pro-choice. And I don't think that that would necessarily rule Tom Ridge out."

McCain's comments came in response to a question about comments he made to several reporters during the Republican primary season. During that exchange, McCain was asked whether New York City mayor Michael Bloomberg would make a good running mate. McCain offered strong words of praise for Bloomberg but said that Bloomberg's position on abortion--he is also pro-choice--would make it difficult to choose him as a vice presidential candidate.

So what was the Arizona senator's problem with Bloomberg, given McCain's been getting pressure from the religious wingnut faction?

"I think it's a fundamental tenet of our party to be pro-life but that does not mean we exclude people from our party that are pro-choice. We just have a--albeit strong--but just it's a disagreement. And I think Ridge is a great example of that. Far more so than Bloomberg, because Bloomberg is pro-gay rights, pro, you know, a number of other issues."

You'll recall that the LCRs held what it called "a series of productive meetings" with John McCain and his campaign and said that the presumptive GOP nom is "unashamed, unembarrassed and proud to work with" the LCRs, yet there wasn't any of the meeting on the Log Cabin web site or its blog, and McCain's peeps were silent.

You've got to feel for the LCRs (ok, maybe not) -- every time an opportunity arises to "educate gay and lesbian voters about Sen. McCain" to tell us why LGBTs should cast a ballot for him, he goes and takes a big public dump on them.

Howie Klein doesn't hold back. Click over for more.