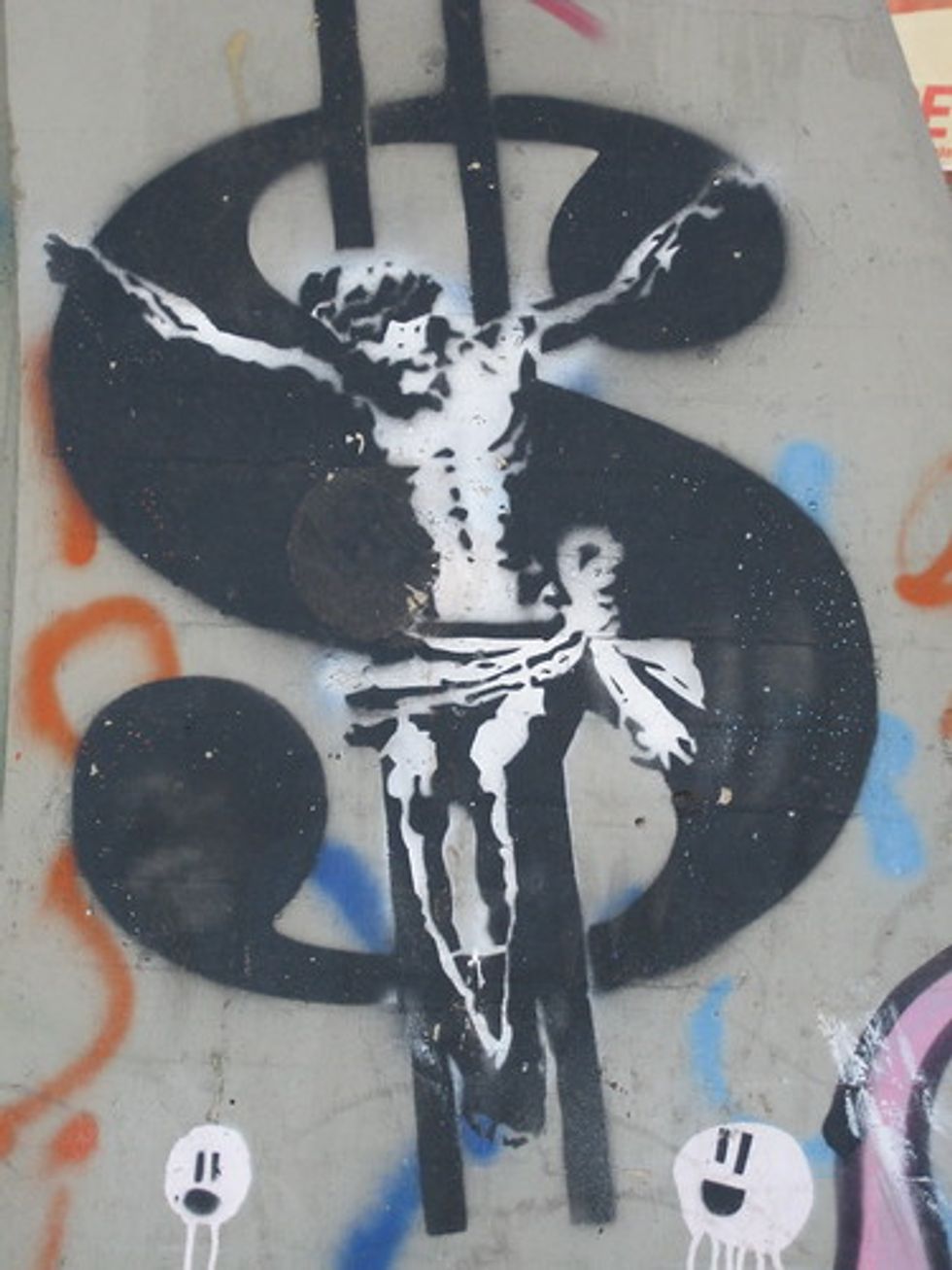 Barbara Ehrenreich has an amusing column out about the lawsuit against mega-church wankstress Victoria Osteen, a lawsuit filed against her by a flight attendant she assaulted, who is suing for "loss of faith" and hemorrhoids from the encounter. (Pam has the full story here.) I'm in full agreement with everyone that the damages the sought by Sharon Brown are 100% bullshit. But I can't help but point out that I suspect Brown did not lose her faith, if she was in fact faithful to the prosperity gospel that the Osteens preach, because her opportunistic cash-grabbing is exactly the sort of power-of-positive-thinking-to-get-rich behavior that the prosperity gospel implicitly endorses. If she only visualizes 10% of Osteen's fortune in her hands, and puts her faith in Jesus to take her faith and give her hemorrhoids, then it will be hers. And frankly, I will congratulate her and laugh that she made off with some of the fortune of these swindlers.

What surprised me was that Ehrenreich focused more on the narcissism and entitlement of the prosperity preachers than whatever needs are driving their parishioners into their pews, when she's usually the go-to person for insight on that sort of thing. It's not a surprise to me that there are a number of evil people out there willing to bank on this sort of swindle. That is always has it has been and always as it will be---con men are part of the natural diversity of human nature. What is the more interesting story is why there seems to be so many people drawn to this theology that's even more ridiculous than most. I refer to Stephen Suh's post on this subject:

The first is by Michael Gerson, the man more responsible than any other for convincing Americans that George Bush gives one damn about Jesus, wrote a column decrying the "prosperity gospel," that slightly more sophisticated Christian version of a cargo cult. Gerson is quite correct to condemn people like Kenneth Copeland, Joel Osteen and Joyce Meyer. To varying degrees they all preach a message of earthly ease, of material wealth given to us without any cost. They make poverty a matter of a lack of faith and righteousness, and they also tie their followers' material wealth to the extent their ministries are supported by them. Osteen and Meyer are not as bad as the Copelands, Tiltons and Hinns, but the underlying dynamic of what they say is pretty much the same.

I took issue in comments with his characterization of cargo cults as less sophisticated than the prosperity gospel. I fail to see how, since they actually have a more sophisticated approach towards bringing the cargo into their lives than "visualize it and pray a lot". Plus, there's a material reason to believe both in airplanes and cargo, whereas the direct link between Jesus and your bank account is a lot more hazy, filled with a lot more hand-waving. (Stephen commented favorably on my brief contribution to a discussion that was about other things.)

But really I quote him because he describes this religious flavor well, and why I find the growth of it, and similar kinds of woo like that book The Secret to be interesting, and possibly an economic indicator. Why are people setting aside rational thought and pursuing blatant bullshit like this? Why do they believe?

Well, the one interesting observation Richard Dawkins made in The God Delusion about his arguments with people on religion is that a lot of religious defenders drifted into confusing "what I wish were true" with "what is true". Example: The argument that we need god for morality is actually a claim about human weakness, not evidence for god's actual existence. An interesting insight that I think is helpful here---people simply believe the prosperity gospel because they want to believe. Given a number of choices for a church, people are going to pick first out of tradition (my family's church), but if they switch, it's probably going to be to one that's telling them more what they want to hear. More sophisticated Christians flinch, because the prosperity gospel lays out the "what I want to hear" aspects of church selection out for everyone to see.

It's a total economic indicator. The usual methods of creating hope for your financial future---working hard, gaining skills, putting in years of loyalty to an employer---are vanishing, and for the working class, are gone. For huge segments of the population, the avenues of improving yourself financially have been shut off completely. In a situation like this, it was inevitable that Christianity---which has a remarkable ability to be reinterpreted to address a lot of unmet needs and desires for diverse populations---would be interpreted this way. Why not? Christianity soothes the fear of death in the same way, so why not extend that to soothing the fear of financial hardship? The heaven/hell afterlife dichotomy is merely being extended into the hear and now by the prosperity gospel, and it was entirely predictable because so many people are living in hell right now. And even for those who are doing okay financially, the barbarians are at the gates, and they know it. Lots of people that are doing okay financially wake up every morning grinding their teeth with worry about the future, and toss and turn every night wondering if the next layoff is coming for them.

I found this statement by Ehrenreich interesting:

While politicos have focused on the Christian Right, there's been far less attention to the fast-growing brand of Christianity Lite, also represented by televangelists Joyce Meyer, Benny Hinn and Creflo Dollar. Positive thinking is the theology of the modern mega-church, and it avoids all mention of sin--including the "sins" of abortion and homosexuality--lest such "negative" topics turn off any potential converts or "seekers."

I believe her on one hand, but on the other, I suspect that there's not a neat division of the two. Hinn is friendly with John Hagee, a mainstay of the Christian right who has been instrumental in creating Christian Zionism. As Matt Taibbi discovered when he went undercover in Hagee's church, they're big on the "self help" style of Christianity that the prosperity gospel takes to its extremes. A lot of hard Christian right churches actually have the same easy answers for their followers, which is what the whole demon expulsion thing is about. Abortion and homosexuality are a big deal, but you're also told that because you're in the super-special church, you get to free yourself of that stuff by writhing on the floor play-acting the expulsion of demons. More than that, the prosperity gospel is a big help for indoctrinating the public for the Republican argument that poverty is the fault of the poor, and that society therefore has no obligations to help them. They're sinners, the poor, so leave them out to dry.