The convention, so far 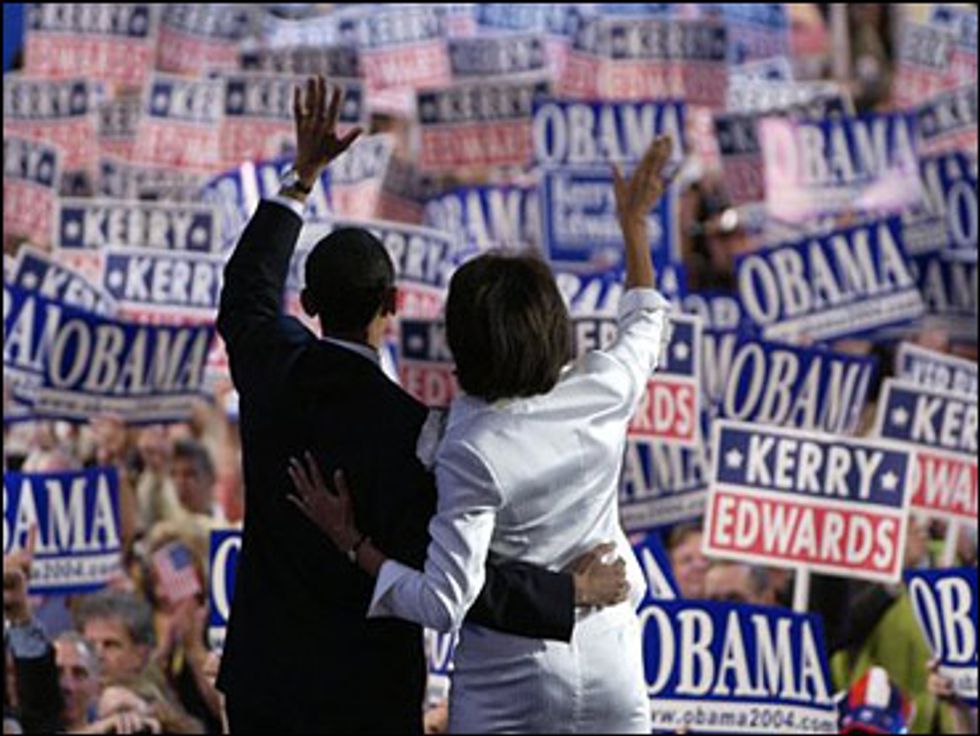 Going into the last day, I'm inclined to say that the convention has amazing momentum, and I hope that it's not going to get fucked up. The speakers have all been on message. A clear pro-woman case is being made, which makes me really happy. But what's really jumping out at me is that the Democrats are showing an uncharacteristic but hopefully soon to be characteristic amount of determination to win this thing. The media manufactured this PUMA story in hopes of making it true, and the party is pushing back with a strong show of unity and purpose. I'm impressed.

What's especially interesting is how humility is being deployed nicely, which I think is a major strength for a number of reasons. Like Ezra said about Kerry's speech:

he message of Kerry's speech could be summed up like this: "From one flip-flopper who would say anything to get elected to another, Mr. McCain." Kerry was brutal.

Here's the thing---the media narrative about Democrats is that they're out-of-touch elitists. And too big for their britches. And they think they're better than you. And you can't fight back against those sort of accusations by being defensive. But what you can do, and what I'm seeing, is that you can simply behave in ways that appear humble and let your actions speak for you. I think that's how Al Gore regained his reputation. For those of us who already liked him, the scenes in An Inconvenient Truth where you see Gore crouched in planes or walking through security like everyone else, where he's a humble everyday man who has gone on this mission, well, those scenes were a little corny. But for people trained to see him as a yappy elitist who thinks he's so much better than everyone else, those scenes brought him down to earth.

Putting Kerry up instead of hiding him away is a good move. Having Hillary Clinton on the floor making procedural motions that directly disprove the narrative that she's making this convention all about herself is the same thing. Having Bill Clinton come out swinging for Obama. Realistically speaking, it's probable that ego is driving these shows of humility, but they come across as humanizing shows of humility nonetheless. You see these big, important people---people that have routinely been characterized as out-of-touch elitists---putting the party ahead of themselves, and doing so without a hint of reluctance. Let's get ego out of this and just be people who believe in things. It's working. Hopefully the mainstream media will be unable to reverse the effects.

For tonight, here's my hopes: The speakers throughout the night leading up to Obama take lots and lots of shots at McCain. Because I think that the best thing possible is to give Obama a chance to be all sunshine and hope. Both cases---pro-Obama and anti-McCain---need to be made. But I think it's ideal to let different people make them.

Let's hope Obama knocks it out of the park. Considering his performance in 2004, I have no doubt that he'll rock it. And damn, it's smart putting Al Gore on tonight, as well. I'm flying to San Diego tonight, so I'm hoping I'll get to where I'm staying in plenty of time to see some speeches. Here's a trip down nostalgia lane for the junkies out there.