The grass is greener, so maybe we'll stay over here 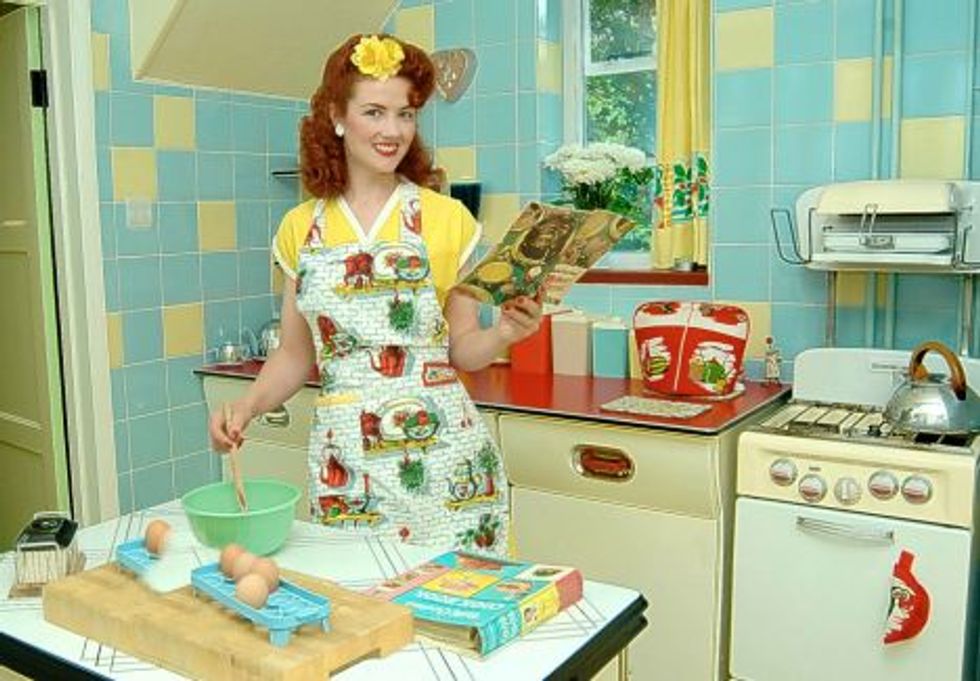 Hoo boy, another reason to link this fucked-up article that treated women who literally want to recreate the 30s-50s as adorable bunnies, instead of people with weird fetishes and/or mental problems.

After decades of relentless pounding from a backlash media, people are beginning to sour on women's liberation. (Hat tip, with criticisms of the methodology.)

The study, by Professor Jacqueline Scott from the University's Department of Sociology, found evidence of "mounting concern" that women who play a full and equal role in the workforce do so at the expense of family life.

Although there are no signs of a full-scale gender-role backlash, there does appear to be growing sympathy for the old-fashioned view that a woman's place is in the home, rather than in the office.....

The results are even more extreme in the United States, where the percentage of people arguing that family life does not suffer if a woman works has plummeted, from 51% in 1994 to 38% in 2002. About the same number of West Germans (37%) agree; but the number there has risen, having been just 24% in the mid-1990s.

It's no wonder, since we're inundated with movies, TV shows, and hand-wringing news articles about how "family life" has completely fallen to shit now that women have their own bank accounts. The conundrum---women are doing less work at home, but we can't expect men to pick up the slack, because that's shit work and meant for the second class---hasn't ever really been resolved. Plus, most homes where women work, they have to. Which means that it's easy to romanticize the housewife without ever actually having to put your money where your mouth is and live that way. The grass gets even greener on the other side when you know that you can't cross over because of the barbed wire fence.

The "Time Warp" article shows exactly how romanticizing the housewife works. Like this woman:

I admit I am in retreat from the 21st century. When I look at the reality of the world today, with all the violence, greed and materialism, I shudder. I don't want to live in that world.

The 50s were free of violence, greed or materialism? Huh, tell that to the people that died in the Korean War. But really, it gets even weirder:

Neither of us drinks and our social life revolves around visiting like-minded friends for tea and cakes.

Gosh, do you think people didn't drink in the 50s? Then how come you've got a bar full of the gazillion accessories that were popular in the hard-drinking 50s?

Okay, that woman is a loony, but it's just an extreme example of how it's easy to imagine that another way of living is so much better than yours, when you don't have to live in it. She waxes poetic about how protective men were, but fails to realize that life wasn't a TV show, and many women didn't have protection. And those who did have it had it at the price of their own right to define themselves.

I'm not sure how much stock to put in this study, except that it means that people are more likely to be open to hearing about how restricting women's rights will somehow bring back the imaginary good old days. Or maybe they don't want to chance ruining their fantasies by trying them out.