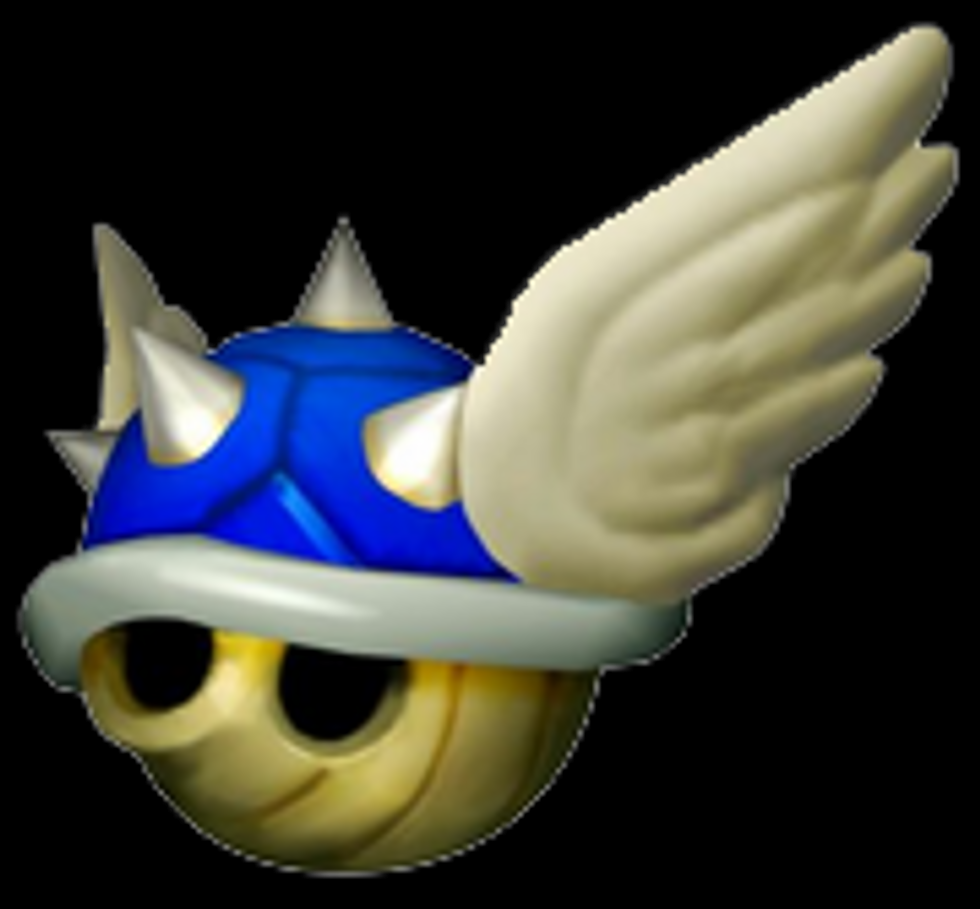 So this year the argument for voting Republican is the same that it has been since Nixon---a cadre of demonized people (non-white people, loose women, homosexuals, feminists, atheists, Muslims, people who read books that lack the reassuring presence of firearms mentions on every other page) who think they's so great are about to win and make you, Joe White Voter, feel like even more of a loser than you are. So show them that this is still Asshole America and vote for McCain. Unfortunately, this sort of argument can be shockingly effective. It's Mario Kart politics, of the blue turtle shell philosophy. The blue turtle shell is the most asshole of all weapons. Most weapons confer some strategic advantage on the bearer. Other colored turtle shells tend to take out people in your immediate vicinity, so that you can pull some places ahead. Mushrooms give you a boost of speed. Banana peels keep those behind you from catching up and passing you. But the blue turtle shell? All that does is fuck up the guy in the front, without conferring advantage to anyone but maybe the guy right behind him. It doesn't help you.

Much, perhaps most, of the Republican voters are people of privilege who openly cling to that privilege and it's purely a vote of self-interest. Most working class people still vote Democratic. But the middle class tends to split nearly 50/50. They're up for grabs. And this "be resentful/be afraid" dog and pony show is for them. Barbara Ehrenreich wrote an interesting book in the 80s called Fear of Falling: The Inner Life of the Middle Class, and what's brilliant about it is that she put her finger on why middle class Americans relate so strongly to fear. It's because our position in the middle class is tenuous. That's even more true nowadays. People without health insurance worry about getting sick. But so do people with health insurance, who carry the knowledge that the coverage they've been buying all those years may end up being an illusion yanked on a technicality. It's easy to dismiss people with full time jobs, the ability to purchase cars and make rent, and college degrees. But their fear is very real. They are one paycheck away. Some cope by pursuing hope---if we vote Democratic long enough, one day we'll get enough power to rebuild the liberal state that made a stable middle class a reality in the mid-20th century.

But Republicans chip off a lot by saying, "Look, here's a blue turtle shell." You may not pull ahead into that secure 1st place, but you can fuck someone up and that feels good, right? Of course, the irony here is that even the blue turtle shell in Mario Kart is less asshole-y than the blue turtle shell politics. In the game, the shell always takes out the person in first place. But Republican politics are all about building a fortress around that class of people. You get to fuck shit up by voting Republican, but only by putting people deemed "uppity" in their place. This is the key to understanding how the right wing noise machine wins people over.

Take the McCain ad that showed the throngs of people who turn out to hear Obama speak, and juxtaposed him with women who are famous for being disobedient. You just knew that it was some loud racist dog whistling, but it was too easy to latch onto the hints of sexuality in it. I've been convinced by a couple of interviews---Adam Serwer on Counterspin and Bryant Welch on my own Reality Cast---that the point of pairing off Obama with these women and focusing on his celebrity was to argue that he's, well, uppity. Showing the crowds and Obama makes the argument---ohmigodblackmanhassomethingyoudonthave!---but including Paris Hilton drives home the point. Above all, Paris Hilton symbolizes someone who has a lot and deserves nothing. She is this symbol to all Americans, left or right. Right wingers think she should be living in a gutter, cast out because she's a sexual woman who doesn't seem to feel an ounce of shame over it. But even more liberal Americans flinch at her vapidity. She is an icon of undeserving. Associating her with Obama is saying he's undeserving, an argument that's mainly made on unspoken racism, because Obama's actual experience would be considered more than enough if he were white. The argument is the same as the Helms' "Hands" ad: The black person has something you don't have. Clearly, you deserve it more. Why? Because you're white and first in line.

You could probably go for hours on why it's a sign of the times that we're supposed to be jealous of politicians, who live, by objective standards, under serious duress and have their freedom of movement, association, and even opinion severely restrained by ambition. Especially Democrats. But they're famous, and apparently in America 2008, being famous is the most important thing in the world. And so people envy it.

I assume, good liberal that I am, that there's a shelf life for winning elections through fear-mongering and stoking people's resentments and envy. That when things get bad enough, we look to someone like Barack Obama and see a leader and not an object of resentful backlash. The McCain campaign seems to think this will be a walk, though, to the point where they're openly mocking the idea of running a decent campaign. They think that the public's capacity throwing the blue turtle shell will never empty out. That we will continue to be content as losers, so long as we can enjoy tearing others down. That we will never start voting instead because we want to be winners and want a better life for ourselves instead of just a worse one for our neighbors. Maybe the McCain campaign is right. Nothing to do but wait and see.

Well, and blog about it in the meantime.