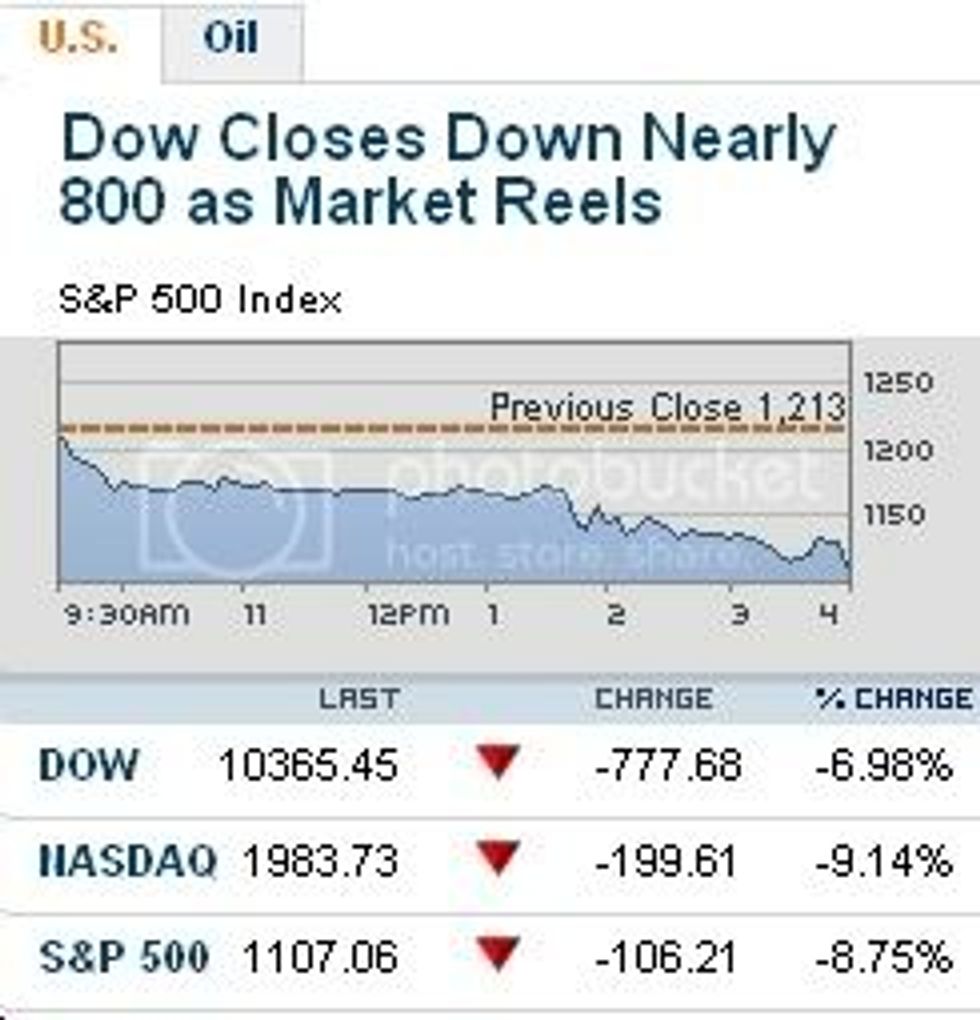 Look at the carnage (left). CNBC:

The market screamed as the House vote on the Wall Street bailout bill teetered on the edge of a cliff — and then fell off. "This is panic and ... fear run amok," Zachary Karabell, president of River Twice Research told CNBC. "Right now we are in a classic moment of a financial meltdown," he said. "The mood is definitely the old expression, 'Fish or cut bait," said Matt Cheslock, a senior specialist at Cohen Specialists. "Everyone’s kind of upset with the political grandstanding that’s going on. We haven't solved any problems that we're in," he said.

The package failed on a 228-205 vote after Congressional leaders held the vote open for a half-hour after time had expired as they tried to persuade lawmakers to change their votes.

The failure -- after lawmakers remained in Washington over the weekend to negotiate a compromise -- essentially sends Congress and the White House back to the drawing table as they try to craft a compromise.

After all, he "suspended" his campaign to round up the votes. His GOP "friends" flipped him the bird.

About two-thirds of House Democrats supported the bill. About two thirds of House Republicans -- whom McCain had explicitly returned to Washington to work -- voted against it.

More below the fold. The Bush legacy is now complete. He's like his nemesis Hurricane Katrina, destroying everything in his path. John pretty much sums it up:

McCain returned to Washington to get a deal and get House Republicans on board. We got the deal, even though McCain stayed home and then went to dinner with Lieberman instead of joining the actual negotiators on the Hill, and then when the vote came up today, the majority of Republicans voted against the bill and killed it. The majority of Democrats voted for the bill. Had the majority of Republicans done the same, it would have passed. John McCain supported this bill, then why was he unsuccessful in getting House Republicans to join? Why? Because they hate him. All the Republicans hate McCain. McCain isn't a maverick as much as he's a loner. People don't like him. And the canard that he was going to somehow bring everyone together in a bipartisan manner was, well, just that, a joke. And today we saw the extent of McCain's great powers to bring people together. McCain crash landed into Washington and blew up the talks. Then he failed to deliver when he promised he could get his party on board. John McCain was just tested, and failed.

I feel sorry for the next president. The messes left by Bush will take years to clean up.

Click over and join "No blank check for Wall Street!"