The blizzard in St. Paul - diversity is MIA

In the WaPo today, there is a piece "In a More Diverse America, A Mostly White Convention," that illustrates a serious problem on display at the Republican National Convention. This year the GOP hit a record low in black attendees (despite "outreach" by the RNC under Ken Mehlman), and the blizzard of pale faces in this year's crowd begs the question -- is this a party ready to lead in the 21st century -- it looks more like a party in denial of reality.

Only 36 of the 2,380 delegates seated on the convention floor are black, the lowest number since the Joint Center for Political and Economic Studies began tracking diversity at political conventions 40 years ago. Each night, the overwhelmingly white audience watches a series of white politicians step to the lectern -- a visual reminder that no black Republican has served as a governor, U.S. senator or U.S. House member in the past six years.

"It's hard to look around and not get frustrated," said Michael S. Steele, a black Republican and former lieutenant governor of Maryland. "You almost have to think, 'Wait. How did it come to this?' "

...The lack of diversity is out of sync with the demographic changes in the United States. The Census Bureau reported last month that racial and ethnic minorities will make up a majority of the country's population by 2042 -- almost a decade earlier than what the bureau predicted just four years ago. Two-thirds of Americans are non-Hispanic whites, 12.4 percent are black and 14.8 percent are Hispanic, according to 2006 census numbers.

The GOP has managed to scrape up only failed gubernatorial candidate Steele to speak in prime time. The plain truth is that the party has failed to present any strategy that works to appeal to minority voters (only 5% of the delegates are Latino/a). It's not as if black voters, for instance, only vote along racial lines -- if that were the case, Alan Keyes or Cynthia McKinney would have fared better in their bids for president this year.

How does the party find a decline in black delegates from a record 167 in 2004 to this year's 36, or the fact that 24 state delegations have no black members acceptable? Steele's frustration says it all:

"I am not going through another election cycle where we fail to energize and engage minority communities. Have you ever heard that saying -- about how the definition of insanity is doing something over and over again and expecting a different result? Well, what we've done with minorities has become a form of political insanity."

If your message is targeted to one monoculture, and your noise machine largely run by that monoculture, you have no way of knowing how out of touch you are. Most Republican pols and conservatives simply have no true gauge for when they’re speaking in an exclusionary manner. It’s natural. For the Democratic party to exist it must appeal to all races - period. It’s no coincidence that most minorities in federal office are Democrats and the few times the Republicans try to dress up their monoculture policies in the guise of a minority they suffer double digit defeats like Michael Steele (Steele lost the black vote 74% to 25%).

The Republicans, even more than in the past, have decided to get their monochromatic base motivated to the exclusion of everyone else. Heck, they put the wife of a separatist on the ticket!

UPDATE: I kid you not, this was what was on the front page of CNN just a short time ago (no P'shopping involved). Palin, the new face of the GOP: 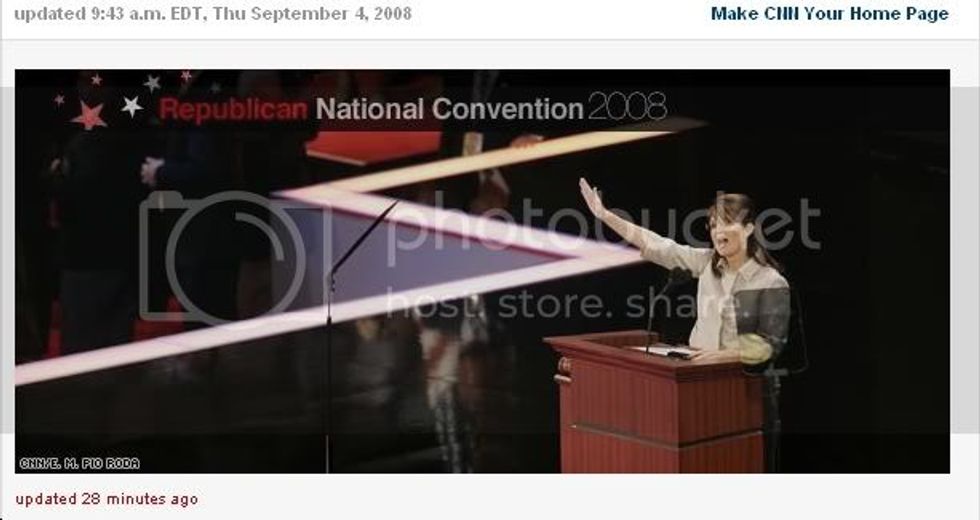