GOP sees Bobby 'The Exorcist' Jindal as its Obama for 2012

No lie. Boy this party is in more trouble than I thought. Now that the bloom is off of the Sarah Palin rose, apparently GOP movers and shakers are ready to gamble on the governor of Louisiana. Must be that whole diversity thing nagging at them. Sorry pals, he's still a fundie.

Like the president-elect, Gov. Bobby Jindal of Louisiana is young (37), accomplished (a Rhodes scholar) and, as the son of Indian immigrants, someone familiar with breaking racial and cultural barriers. He came to Iowa to deliver a pair of speeches, and his mere presence ignited talk that the 2012 presidential campaign has begun here, if coyly. Already, a fierce fight is looming between him and other Republicans -- former Arkansas governor Mike Huckabee, who arrived in Iowa a couple of days before him, and Alaska Gov. Sarah Palin, who is said to be coming at some point -- for the hearts of social conservatives.

..."The Republicans really have no choice except to look at some people more youthful if they want to have a better chance of winning," said Betty E. Johnson, an independent and the wife of a Cedar Rapids pastor, who voted for George W. Bush in 2000 and 2004 but who went for Obama over 72-year-old John McCain. "I liked Obama's energy and hope. I don't know, but maybe a younger person would give Republicans a feeling of more energy, openness."

Exactly -- a feeling of more openness. It takes more than being born in the last half of the century to actually project a nod to diversity and openness, but whatever, the GOP is all about imagery and imagination rather than reality. Look at the sea of pale old folks who attended its convention. But I guess fronting is about as good as the Republicans can do.

....Meanwhile, others around the country were talking him up. No less an aspiring kingmaker than Steve Schmidt, the chief strategist of McCain's failed presidential bid, sees Jindal as the Republican Party's destiny. "The question is not whether he'll be president, but when he'll be president, because he will be elected someday." The anti-tax crusader Grover Norquist believes, too, that Jindal is a certainty to occupy the White House, and conservative talk-radio host Rush Limbaugh has described him as "the next Ronald Reagan."

..."If anything, McCain's candidacy suggests that age is not always a positive -- and sometimes is a negative," Norquist says. "As Republicans, you have a real problem now with younger voters and immigrants. If you were going to central casting for a candidate to deal with all that, who do you have? Jindal. He is young, and he looks young. . . . He's a great communicator. And his record is that he's sharp and quick with policy."

Jindal supporters regularly evoke the Reagan parallel, fueled by a confidence that their hero's brand of social and fiscal conservatism, coupled with his sunny folksiness on the stump, can rekindle the Reagan flame.

Wait -- Reagan!? I thought that Sarah Palin was the reincarnation of Ronald Reagan, according to his son Michael:

Wednesday night I watched the Republican National Convention on television and there, before my very eyes, I saw my Dad reborn; only this time he's a she...Welcome back, Dad, even if you're wearing a dress and bearing children this time around.

Anyway, this bit of business below the fold is the nugget to pay attention to...

Jindal is his own invention, in the mold of an Obama. Born in Louisiana as Piyush Jindal to highly educated immigrants from India, he decided as a young child to nickname himself "Bobby," after his favorite character on the TV show "The Brady Bunch." Raised as a Hindu, he converted to Catholicism while in college and later wrote a lengthy, intimate story that provided a window on his religious evolution, in a manner that fairly calls to mind Obama's books about his own grappling with issues of self-identity.

...The record is still evolving, like the rest of him. But social conservatives like what they have heard about the public and private Jindal: his steadfast opposition to abortion without exceptions; his disapproval of embryonic stem cell research; his and his wife Supriya's decision in 1997 to enter into a Louisiana covenant marriage that prohibits no-fault divorce in the state; and his decision in June to sign into law the Louisiana Science Education Act, a bill heartily supported by creationists that permits public school teachers to educate students about both the theory of "scientific design" and criticisms of Darwinian evolutionary concepts.

Yes, there we are. Nothing new, just a new hue to the same bible based policy promotion by the GOP. No one is going to be fooled by this guy.

Let's just take a look at some of the fun stuff about Bobby Jindal that was unearthed this cycle and tell me if these posts from the Blend files reflect change or more of the same...

in an essay Jindal wrote in 1994 for the New Oxford Review, a serious right-wing Catholic journal, Jindal narrated a bizarre story of a personal encounter with a demon, in which he participated in an exorcism with a group of college friends. And not only did they cast out the supernatural spirit that had possessed his friend, Jindal wrote that he believes that their ritual may well have cured her cancer.

* Jindal draws a blank when asked about McCain's 'big ideas'

UPDATE: One of my readers, JulieWaters, added this graphic in the comments... 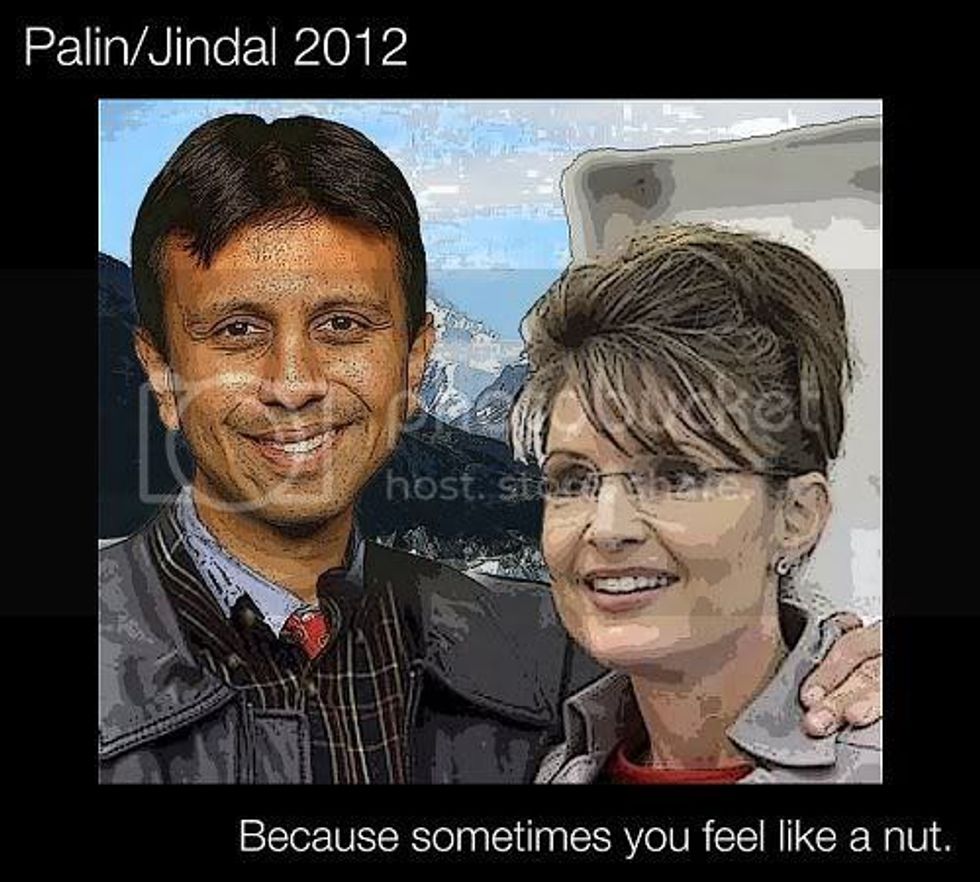