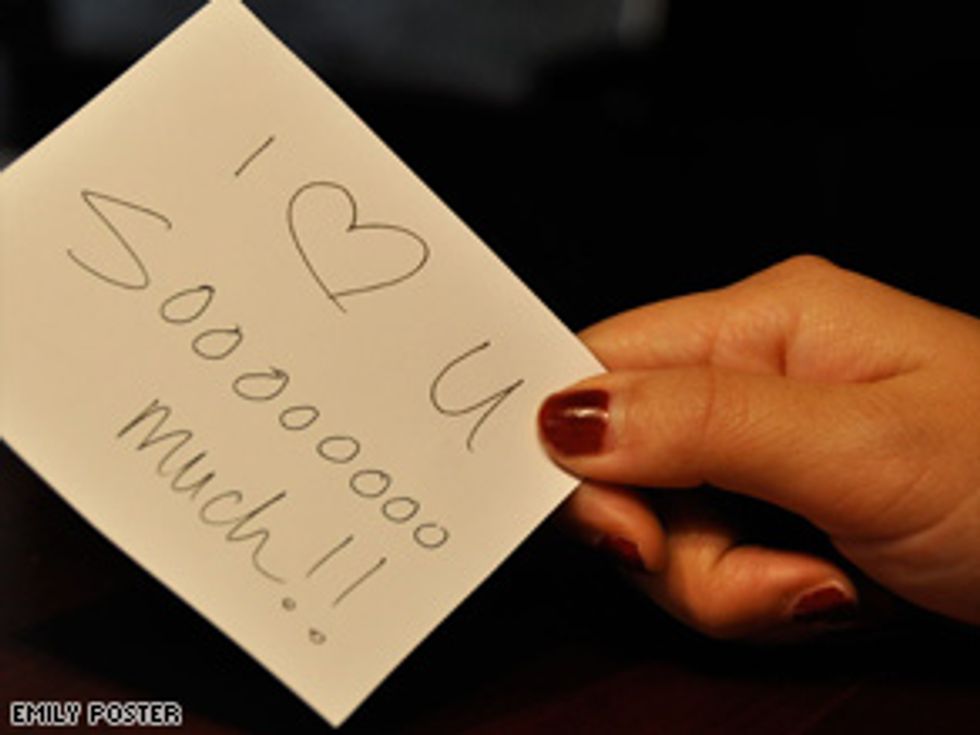 Sarah at Broadsheet links this article from The Frisky that proposes that women should make men say, "I love you" first when dating them. It's kind of funny, because Sarah is obviously annoyed at the article for its dripping sexism, but she also thinks there's a little there there, and emails it to her guy friends, only to find out (to no one's great surprise) that most agree, with one dissenter. It feels right, but it feels wrong! What's going on?

Well, I think I can shed some light on why I think the advice feels right, even if the writer Wendy Atterberry is wrong on her reasons. A quote from it:

I appreciate both arguments and understand the sentiments behind them, but at the risk of having my feminist card revoked, I think it's naïve for a woman to utter those three little words before a man does.

Unlike asking a man out, making a move on him, or even proposing, there's no action-based response to the first "I love you." It's all words, it's all emotion. In that moment, he either loves you back or he doesn't -- you only hear the black or white of a 'yes' or 'no,' not the gray of "Well, I like you a whole lot and I could see myself falling in love with you, but I'm just not quite there yet."

And the truth is, it often takes men longer to get there than it does for women. Men process their emotions more slowly, they're usually more cautious about taking their feelings and relationships to the next level.

So her reasoning is flawed, because it's based in incorrect and insulting gender stereotypes. Plus, she does that irritating thing where she pretends she's being brave for getting her "feminist card" revoked, when in reality it's braver to wear the feminist card proudly and face up to the insecurity and anger that generates in many people, men and women both. Her entire argument is bunk. Men are not emotionally retarded, and frankly I've seen more men than women fall fast and hard in love in my time. Plus, her entire argument is based on the idea that it's a woman's duty to catch and keep a man, and hanging onto a man is a priority over things like hanging onto your dignity or being true to your feelings. The reason not to say, "I love you," is fear that he will bolt because you wounded his ego or scared him, but as Sarah says, if such a man bolts, you learned you were, at best, not a good fit and quite possibly that he's a jerk. Still, the advice feels right on a certain level, and I propose it's not because women are desperate or men are emotionally retarded. It's for a basic, simple reason, which is that men have more social power than women. When it comes to romantic relationships, there's a certain belief that men should take more risks and more responsibility if they're sincere and caring about a woman they're with, because men have more power. And this is a clear-cut situation of how this works. A woman who says, "I love you," first and gets rebuffed is running a major risk---in some social circles, up to 100%---of being labeled as a crazy bitch. Desperate. Grabby for the ring. Shallow, possibly a gold digger. A man doesn't run much risk of being labeled these things if rebuffed unless it's a really weird situation, like he said it in the first week or something. Most of the time, getting rebuffed after a certain time investment in a woman will result in sympathy for the man---what's wrong with her, when he's such a good guy? Women are so picky, and they're masochists, too, who go for jerks instead of nice guys who say they love you.

To make it even more unfair, because the risk is so much greater for women, most of us will refrain from making such a dramatic move as saying "I love you" first out of self-preservation. (And that's self-preservation, not even necessarily relationship-preservation. There is a difference, though you wouldn't know it from reading most dating advice aimed at women.) Thus, if you're a man and you're eager to say it, you can take into consideration the chance that she's eager, too, but knows that she better wait for you to go first for dignity-based reasons. Of course, you don't know for sure if you'll be rebuffed, but if you know that the vast majority of women will sit on it until you speak first, you can read body language and figure out the chances that she's eager.

It's a perverse way that the patriarchy perpetuates itself in romantic relationships. Men have more power, and so it's only fair to make them take more responsibility, right? They run a lower risk when they ask someone out, make a move, say "I love you", suggest moving in, or propose marriage. But by letting men take charge, we reinscribe their power, and deprive women of their right to go with their feelings, too. I very frequently see people (mostly men, interestingly) suggest that the only way for this cycle to be broken is by women taking initiative and putting themselves out there more, knowing full well that all blows they take are twice as heavy. And there's no guarantee that this method will actually reduce male power over women. It might just be running a lot of risks, taking a lot of blows to your reputation, and not getting the payoff of more equality anyway.

On this subject, I figure it's ideal if you kind of both say it at once so quickly you can't remember who said it first. But I'll be damned if I know how to make it happen that way. Memory is faulty, and so my memories of it working out just so are faulty as well. Part of it is holding off until you're really sure that the other person will reciprocate and immediately, I'm sure.