(Pandagon is on the ExpressionEngine CMS platform, btw, in case anyone was wondering...)

NOTE: I was interviewed about the Soapblox hack a couple of days ago by Jeffrey Toobin of The New Yorker for the January 19th Talk of the Town column, It hits newsstands Monday. You can read it here. 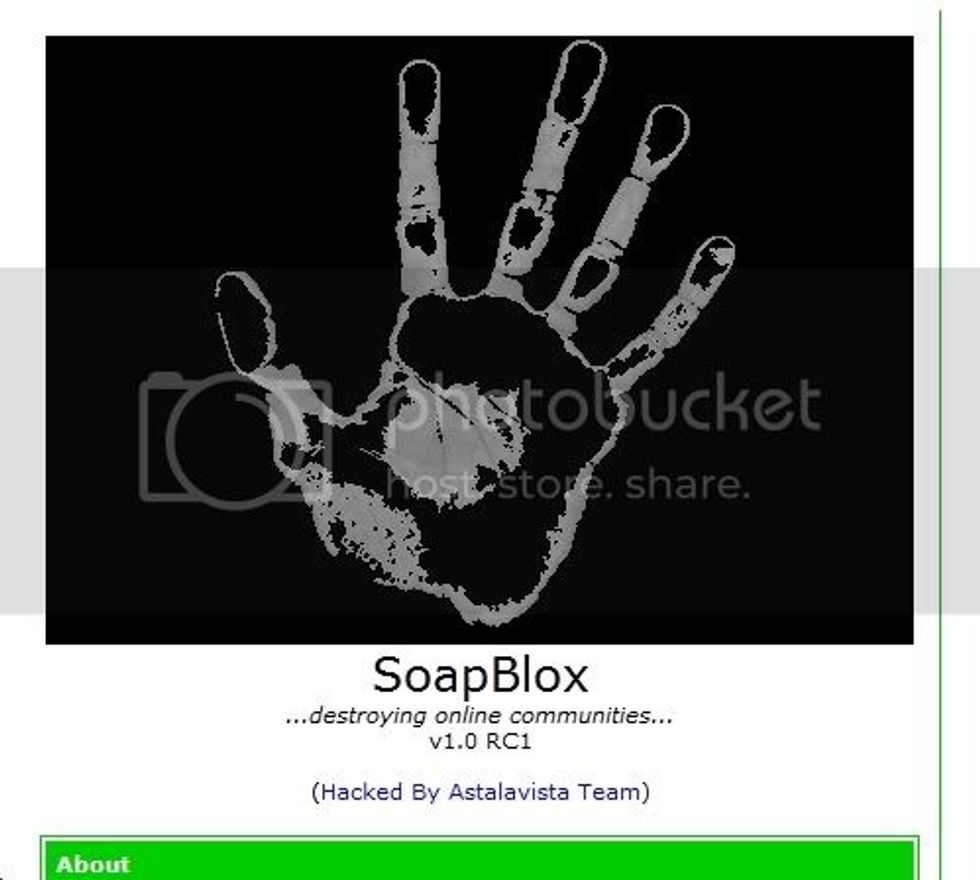 In the days since the hacking of the blogging platform Soapblox's server on which Pam's House Blend, OpenLeft and many state blogs reside (my reporting here), there have been a lot of discussions around the blogosphere about the fate of the content management software and its hosting service (Soapblox provided both).

One development has been the launch of a "Save Soapblox" fundraising campaign on Friday by Chris Bowers of OpenLeft (administered through BlogPAC). BlogPAC was alreadly deeply involved with Soapblox, paying the service fees for most of the state blogs on the platform each year, so that existing relationship was in place. Donating to "the cause," as defined in the DKos diary, is to deal with the short-term issue of migrating the data and making it secure.

--Ensure all backup processes are working and functional to guarantee that if hacking happens, data is preserved

The good news is that, in addition to restoring full service for Soapblox, Paul has already found a system administrator who lives in his area and is able to help. All of the work listed above is currently underway. Here is what it will cost:

A big caveat here -- nothing about the above is a long-term solution for a to-date closed-source, run-on-a-shoestring by one person effort, and they know it. Evolving a business based on the programming savvy (and the health and well-being) of Soapblox owner Paul Preston is not a business plan, particularly in crisis management mode, and without transparency.

The question needs to be asked -- what is in the best long-term interest of supporting the progressive blogosphere? More below the fold, and it's about more than just one content management system and hosting service.

Complicating the matter is that right now, there is not a turnkey alternative available to bloggers on the Soapblox platform that will provide the same functionality as the open-source, Scoop-based Daily Kos. If it did, we'd all already be there. Drupal, for instance, is open source and can provide the same feature set, but it involves programming expertise, time or money to develop and maintain the back end, something most bloggers on Soapblox don't have. Same thing with Scoop.

As I said above the fold, the fact of the matter is that most of the blogs affected by the SB takedown don't have the technical skills or time to easily migrate their content to another platform -- they want to be free to produce the content that resulted in the progressive online political revolution. Paul Preston and Soapblox provided this on a shoestring and herculean personal commitment. Now that a good chunk of the progressive blogosphere is on the platform and politically institutionalized, the sad story of last week is that its existence is tethered by a thread to weak technical and support infrastructure -- an easy point of failure.

Interestingly, a MyDD diary by Drupal consultant Shai Sachs (and thus a competitor with Soapblox), "SoapBlox meltdown and Drupal," makes some observations that are relevant to consider in terms of a long-term future of stability, even if there's a vested interest in Drupal:

Soapblox is a reasonably good technological platform, but I think the key to its success, until this week, was its low barrier to entry. For a low monthly fee and with very little technological expertise, a blogger could launch a full-featured blog that was felt, to readers, a lot like DailyKos. In contrast, Drupal and multi-user Wordpress would require an awful lot of tinkering and monkey-wrenching in order to simulate the Dailykos experience.

With Soapblox hanging by a thread, it's important to develop a new and stronger alternative to the old system.  There's very little question, in my mind, that the best foundation for this kind of hosted blogging system will be Drupal, for a wide variety of reasons.  First, Drupal's out-of-the-box features include user-specific diaries, moderated comments, and the capability to front-page a diary - those are all key features of Soapblox.  What Drupal lacks is the ease-of-use of Soapblox, but as OnSugar demonstrated late last year, it's entirely possible to run a hosted, easy-to-use blogging platform on Drupal.  Second, Drupal is one of the most popular content management systems in the world, which means it has an enormous user, developer, and support community; there is no single point of failure in the Drupal community, meaning that a near-meltdown like Soapblox's is nearly unthinkable.   Finally, there is already a considerable degree of cooperation between the Drupal and progressive communities.  Many local Dean organizing groups, and later DFA chapters, developed websites based in Drupal, thanks largely to the release of a Drupal distribution called Deanspace, (which later changed its name to Civic Space Labs).  Today, there are a variety of progressive Drupal development firms, including Development Seed, Chapter Three, Prometheus Labor, ZivTech, and my own company, Lightbulb First Consulting, LLC.  Drupal is a community which is strongly based in a number of open source values, including meritocracy, transparency and accountability - the same values that drive the progressive blogosphere.

...Primarily, I think it is the responsibility of the progressive Drupal community (which I count myself a part of), to answer this call-to-arms. We must develop a stronger, better alternative to the Soapblox platform, and we must properly productize and market that solution in order to make it palatable to progressive bloggers. These are busy days for me, and it's not entirely clear that I'll have time to develop such a product on my own, or to organize a larger effort. But I think we need to get the ball rolling very soon, because the days when it made sense to run the progressive blogosphere on a shoestring are long gone.

And that last comment is quite apt because you get what you pay for. Poor Paul Preston had to deal with deadbeat customers who wouldn't even pony up their cheep $15/month. That doesn't exactly inspire one to believe in a sustainable operation.

Conversely, if Soapblox blogs migrated to a platform that required each blogger to foot the bill for redesign, programming and adequate hosting, would readers pony up and pay an annual subscription fee (like a magazine) to support the costs of keeping those blogs running? I don't know, but I do know that it would be tough for a good number of small state blogs to pull in the funds to afford an adequate transition and hosting in perpetuity to ensure the content's survival. That's the wake up call for all corners of lefty blogtopia.

While I admire the effort by BlogPAC to raise funds for the short term issues (clearly the Blend benefits from addressing the acute problem), that's not evidence of a sustainable business plan -- and we've yet to see what that will look like. BlogPAC is now in the precarious position by default of being responsible for the security and existence of the Soapblox blogs by asking people to endorse and support Soapblox's (uncharted) future. Even as an affected blog (and the person who first publicly alerted Soapblox customers about the hack), I haven't been privy to any specific discussions about long-term plans, so your guess is as good as mine on what's going on in back-channel discussions.

There's been plenty of speculation about what will be done about the matter at PHB. It's odd that I've seen reports that I've 1) decided to stay, 2) decided to leave, 3) remain undecided. Clearly people see what they want to see; I did have a thread asking readers their opinion about where the Blend should go from here, but I've not stated what I plan to do.

And the kind of public mulling I'm doing here (since I believe in transparency about the PHB community to you, the readers) is going on between Soapbloxers bloggers in private -- I've been in contact with some of them. Most 1) want to see Soapblox survive and thrive; and 2) are making their own contingency plans to abandon ship if the ship's leaks aren't repaired and there's not a sustainable plan forthcoming. I can't blame them - they'd be serving their readers poorly if they didn't. It's not a trust issue (but given some of the comments on the initial Kos thread about the panic, that sentiment was out there) or a lack of commitment to progressive solidarity, it's a simple survival instinct based on prudent business decision-making.

There's no point slagging Soapblox, the bloggers on the platform or anyone else -- we're at this point and need viable options for those who want to provide an online political base for progressive thought in a community based format that enables talented voices to stay in the game without huge overhead or fear that their contributions to the political discourse are at risk of being lost forever. Unlike a book, where there are many copies in libraries as a "backup", blog content is not guaranteed to survive 100% intact as it was the day it was first published. Look at Archive.org's Wayback Machine for the Blend. Not comprehensive by any stretch of the imagination.

An example -- the first iteration of the Blend was on Blogger, with my files not hosted at Google (the current owner of Blogger), but on my ISP's server. So if I kick off, my ISP bills will stop being paid, and eventually access will terminate, leaving some cached material in "The Google" cache, but some original content will be gone forever unless it's preserved offline to be ported elsewhere by someone I name in my will. At least I have backups of my entire Blogger archive; those who host their content on Blogger's servers, I have no idea what access they have to download their content wholesale. Not exactly permanent.

Now I'm on Soapblox, a closed system, and I've obtained the db, but it's the same thing. Anywhere the content is hosted, its existence and access to it in the future completely intact depends on a bill being paid in perpetuity by someone. That's food for thought.

Many readers take these things for granted - the content is you read today is available for nothing but a click of a mouse. Today. Tomorrow is another story.