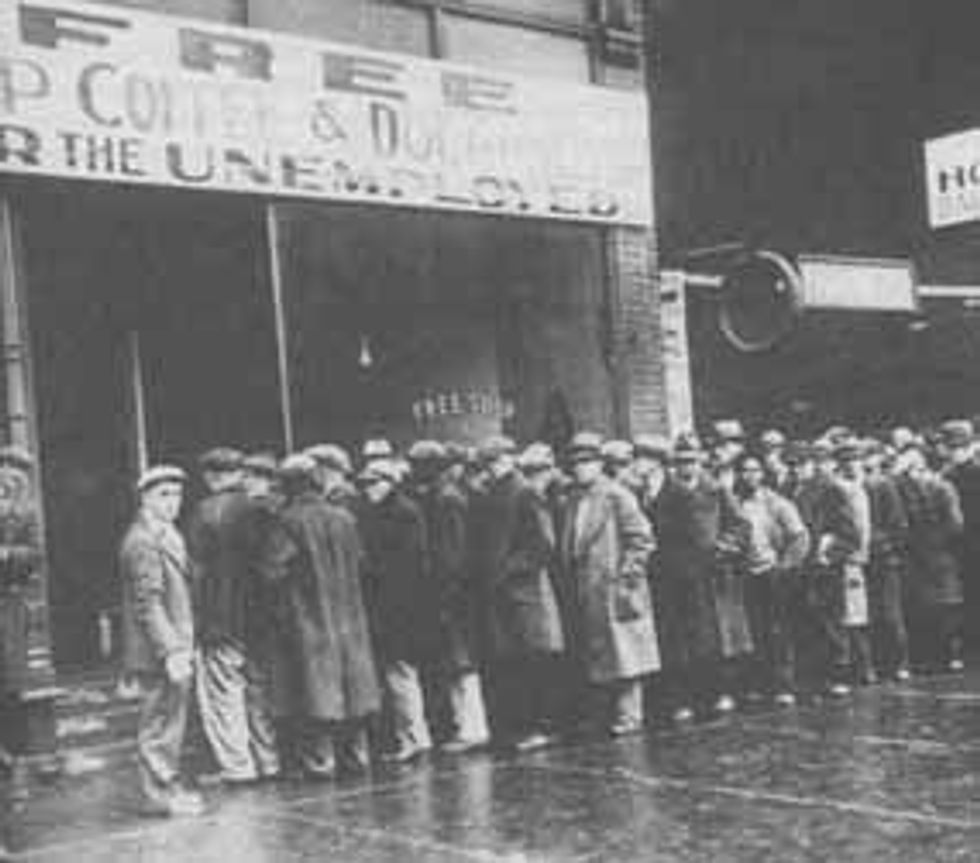 All I think really needs to be said about Obama's speech last night is that I continue to be concerned that he's sticking to the catastrophic-times-mean-catastrophic responses line. I mean, it's true and it might be the only thing he's got, so I can't hold it against him, but it doesn't set him or congressional Democrats up to transition into the next round of legislation that will cause Republicans to have faux heart attacks all over cable news. It's not just universal health care, though we need that more than ever because it will help get people into the more temporary jobs that the stimulus bill has in it. (Though, ideally, the infrastructure built will encourage economic growth---fascinating how much conservative rich people rail against systems that will make them more money, if the side effect is that the working class does better? Seems like a lot of people would choose fucking their neighbor over enriching themselves every single time.) We're going to have to do another round of stimulus spending after so much was cut from this package, I suspect.

Reading Dean Baker from the Center for Economic and Policy Research only reconfirmed my suspicion.

The moderates in the Senate of both parties are very proud of themselves for having negotiated a slimmed down version of the stimulus package. They apparently knocked out more than $100bn in spending, trimming the package to less than $400bn a year.

This led to a round of self-congratulations at what this crew considered a major accomplishment. Those of us who were not a party to the negotiations, and who don't share the peculiar thought processes of the moderate clique, see the primary outcome of this effort as having taken one million jobs out of the stimulus.

Emphasis mine. I'm not entirely sure what the clique of centrist fools means to achieve by leaving one million people out of work that would provide money that the workers in turn would inject into the economy while building infrastructure, but I have my suspicions. From everything I've read, there's been a lot of interest in the job creation part of this package in improving people's resumes and job skills so they can turn around and get even better jobs when the economy improves. Better jobs than their stimulus jobs, but probably better jobs than the ones they had before the economic crisis. As Baker explains:

This is why the utterances coming from the centrist cabal were so bizarre. Many of the senators indicated that they considered healthcare, education or some other type of spending to be very important, but that the specific category of spending did not constitute stimulus.

As Baker notes, the point is to create jobs and spending in health care and education creates jobs. I'm going to add that these sectors not considered stimulus are sectors where people can get jobs and either keep them or use the experience they got at this job to get a better, more stable job in the future. As one example, most women I've known who've gone into nursing started off with a low-level health care job and found that they liked the job, and they were able to get the support of their employers to get the education they needed to become nurses. Which means more pay and more job opportunities, and it means that they're never going to have to work for $8 an hour at Wal-Mart again.

I shouldn't have to point out twice that health care and education are job sectors that rely heavily on the female half of the workforce, and that probably helped centrists convince themselves that the jobs created in this sector aren't "real" jobs.

Okay, one more quote from Dean because I have one more point to make.

In addition to not grasping the concept of stimulus, these folks still don't seem to appreciate the seriousness of the downturn. The loss of almost 600,000 jobs for the third straight month should have been enough to convince any remaining sceptics that this is really serious. (Actual job loss was probably even more than the data show). When Alan Greenspan sinks the economy, he doesn't mess around.

One thought that's been haunting me over these past few days is this: FDR had two solid years of the Depression before he took office. By the time Hoover was done non-reacting to the crisis, the unemployment rate had gone from about 5% to just under 24%. When Dean says the centrist cabal doesn't realize the seriousness of this situation, this is exactly what he means. 24% unemployment and all the attendant horrors such as Hoovervilles and block-long lines for soup kitchens meant that, by the time FDR stepped into office, he had the political will to do something. But it also means that the damage was so bad that he was able only to relieve the crisis, not turn the economy around, which didn't happen until WWII.

The lesson of comparing the past few weeks to the Depression are this: 1) People are idiots, and they won't do anything to help themselves until it's too late, and 2) If you let an economic crisis spiral out of control before you do something about it, then there will be permanent damage that will be nigh impossible to alleviate. Right now, I'm pretty relieved that Obama's going out there swinging and, for once, feeling pretty fucking good about the candidate I supported for office. But I'm concerned that he doesn't have the rhetorical strategy or the will to do what needs to be done after passing this stimulus bill, which is get to work on the next agenda items to relieve the economic crisis, because with one million jobs sliced out of the bill and millions more hemorrhaging from the private sector, that's what he's going to need to do.