TN church shooter: 'Know This If Nothing Else: This Was A Hate Crime' 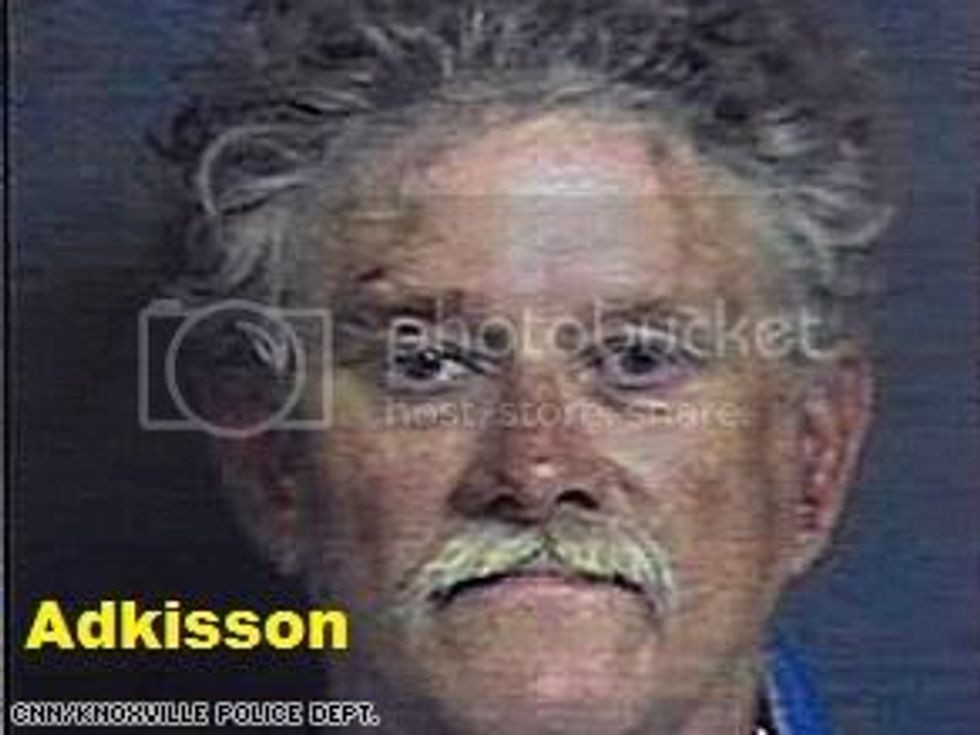 Back in July of last year, Jim Adkisson, 58, opened fire with a shotgun during an event at the Tennessee Valley Unitarian Universalist Church, where more than 200 people were attending a performance of "Annie"). It was also later learned that the Knoxville congregation had also recently put up a sign to publicly welcome LGBTs to worship.

Fast forward to Feb. 8, 2009 -- Adkisson has been sentenced to life behind bars for the deaths of Greg McKendry and Linda Kraeger. As many speculated at the time, the influence of the right-wing bile surely had to influence Adkisson. His four-page manifesto not only made clear that he wanted to kill liberals -- it called for the right-wing to rise up and commit violence. Sara Robinson at Orcinus:

But yesterday, Adkisson told us himself -- in his own words -- just how central right-wing eliminationism was in driving him to his shooting spree. Shortly after he was sentenced yesterday, he released a four-page handwritten "manifesto" -- which he'd intended to be his suicide note -- to the Knoxville News (the full .pdf can be downloaded here). In it, he unleashes the full measure of his hatred for liberals -- and encourages other would-be right-wing warriors to take up arms and follow him into battle.

"Know this if nothing else: This was a hate crime. I hate the damn left-wing liberals. There is a vast left-wing conspiracy in this country & these liberals are working together to attack every decent & honorable institution in the nation, trying to turn this country into a communist state. Shame on them....

"This was a symbolic killing. Who I wanted to kill was every Democrat in the Senate & House, the 100 people in Bernard Goldberg's book. I'd like to kill everyone in the mainstream media. But I know those people were inaccessible to me. I couldn't get to the generals & high ranking officers of the Marxist movement so I went after the foot soldiers, the chickenshit liberals that vote in these traitorous people. Someone had to get the ball rolling. I volunteered. I hope others do the same. It's the only way we can rid America of this cancerous pestilence."

"I thought I'd do something good for this Country Kill Democrats til the cops kill me....Liberals are a pest like termites. Millions of them Each little bite contributes to the downfall of this great nation. The only way we can rid ourselves of this evil is to kill them in the streets. Kill them where they gather. I'd like to encourage other like minded people to do what I've done. If life aint worth living anymore don't just kill yourself. do something for your Country before you go. Go Kill Liberals.

Wow. I wonder how Bernie Goldberg feels about being immortalized by a member of the right-wing Base. As Sara noted later in her post, Adkisson has years to spread his raging hate from a prison cell to his brothers-in-arms.

No doubt this manifesto is being blogged, mailed, twittered, and otherwise littered across the far-right infosphere today, and Adkisson will likely emerge from this as a new hero of the extreme right wing. (He's obviously articulate and literate, which means we may expect more of these bilious rants coming out of his cell in the years ahead.) It also seems likely that, probably sooner rather than later, other victims of our curdled economy will accept his charge, pick up their guns, and attempt to follow him into battle.

Nicely done, Messrs. Hannity, Goldberg, Limbaugh, Savage and O'Reilly -- and all your lesser brethren who keep the hate speech spewing 24/7/365 across every field and into every shop in the country.