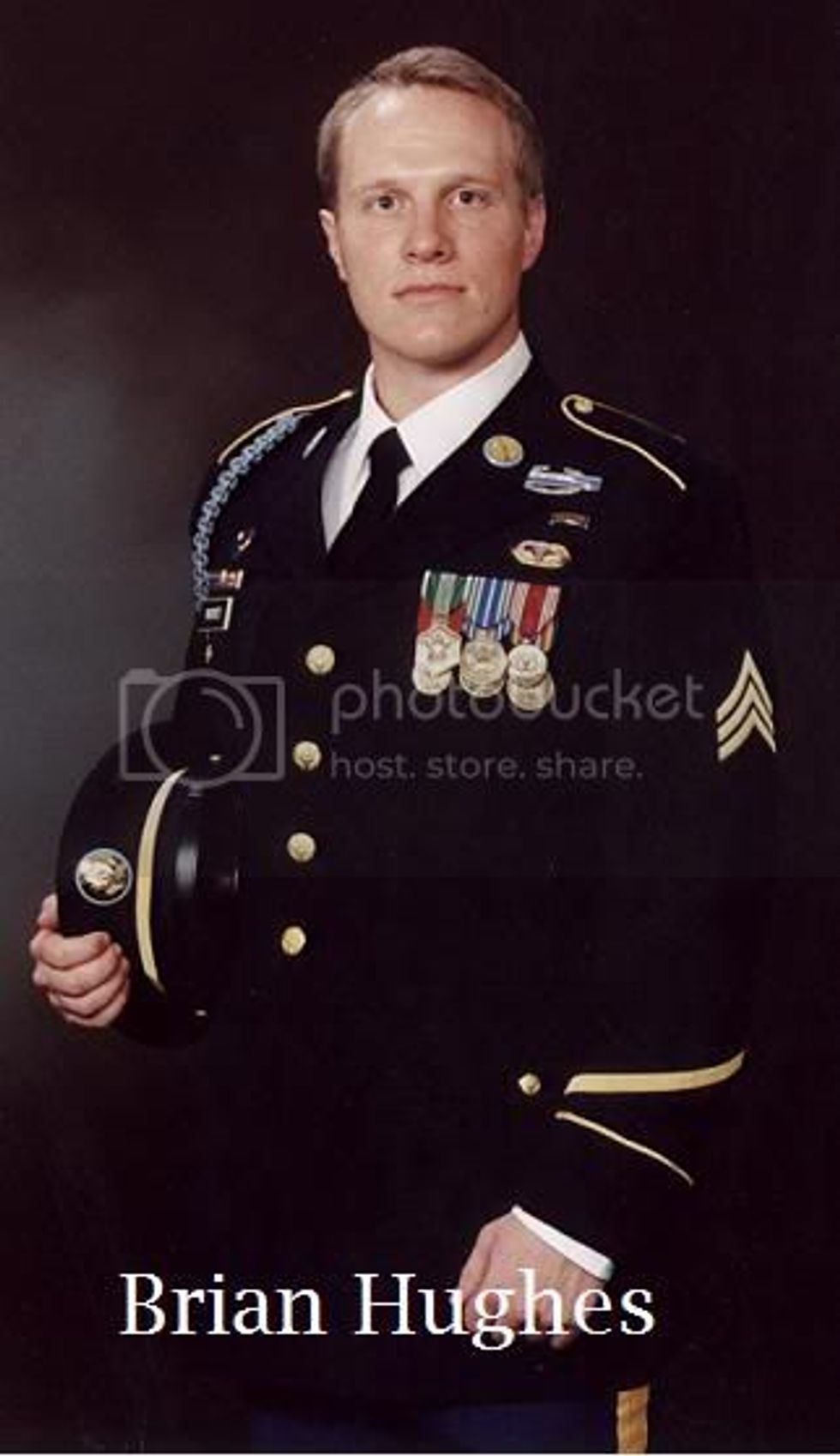 I received an email from Brian Hughes, a former sergeant in the Army Rangers, who wrote an op-ed published in the Wall Street Journal the other day, "Gays Have Served Honorably in the War on Terror," calling for the repeal of DADT. He said that he was moved to write it after reading a post and comments in a thread on the topic that I cross-posted to Pandagon.

A veteran who served in Iraq and Afghanistan, Hughes was awarded the Commendation Medal twice for his service, and the fact that he was gay -- and out to some of his platoon mates -- didn't matter. And being in close quarters didn't matter either.

As a candidate, Barack Obama spoke out strongly against the "Don't Ask, Don't Tell" policy of banning gays and lesbians from serving openly in the Armed Forces. He promised a full repeal of the ban if he was elected. But President Obama seems to be backing down from this pledge. The White House now hedges on the issue, saying it supports changing the policy "in a sensible way."

What's clear to me, a gay man who served for four years in the military, including in Iraq and Afghanistan, is that the most sensible change would be a full repeal.

I was a line infantryman in the Army's Ranger regiment from 2000-04, earning a promotion to sergeant within three years. In that time, my platoon performed dozens of combat missions on the front lines. Our lives depended on complete mutual trust.

Several of my colleagues knew I was gay. We lived in the closest possible conditions. When there were showers, we showered together. When we were out overnight on the cold, bare mountains of Afghanistan, we slept huddled together for warmth. It should go without saying that there was nothing remotely sexual about these situations. We had uncomfortable experiences -- we were at war, after all -- but my buddies were never uncomfortable with me.

Elaine Donnelly, are you listening? His colleagues had nothing to fear, but Hughes did...

The reason I didn't come out to more of my comrades wasn't out of concern for morale. I was worried about losing my job.

Since "Don't Ask, Don't Tell" came into effect, some 13,000 service members have been fired for being gay. Thousands more decided against pursuing a full career in the military and let their contracts expire. Replacements can be recruited and trained -- at a cost of more than $36 million per year -- but each individual's institutional knowledge is lost, to the detriment of the unit and the mission.

Today the strongest resistance to overturning "Don't Ask, Don't Tell" may not come from the military, which polls show mostly supports repeal, nor from social conservatives, who are not in power. Rather, there are many Democratic leaders and strategists who blame the issue of gays in the military for damaging the beginning of Bill Clinton's presidency. They fear it could have the same effect on Mr. Obama.

There you have it -- the fear is the Political Post Traumatic Stress Disorder (PPTSD) of the advisors who lived through the missteps and caving during Clinton's first term. The problem with this fossilized thinking is that the world has changed, people. The polls favor repeal; those currently serving support it. About the only group that is currently cited over and over in favor of retaining this policy are some long-retired service members and the "representatives" of this position like the shrill, catastrophic doyenne of discrimination, Elaine Donnelly of the Center for Military Readiness, who did her cause no service by making asinine statements on the Hill during her laughable testimony last year.

Read some of the ludicrous things she said after the jump. 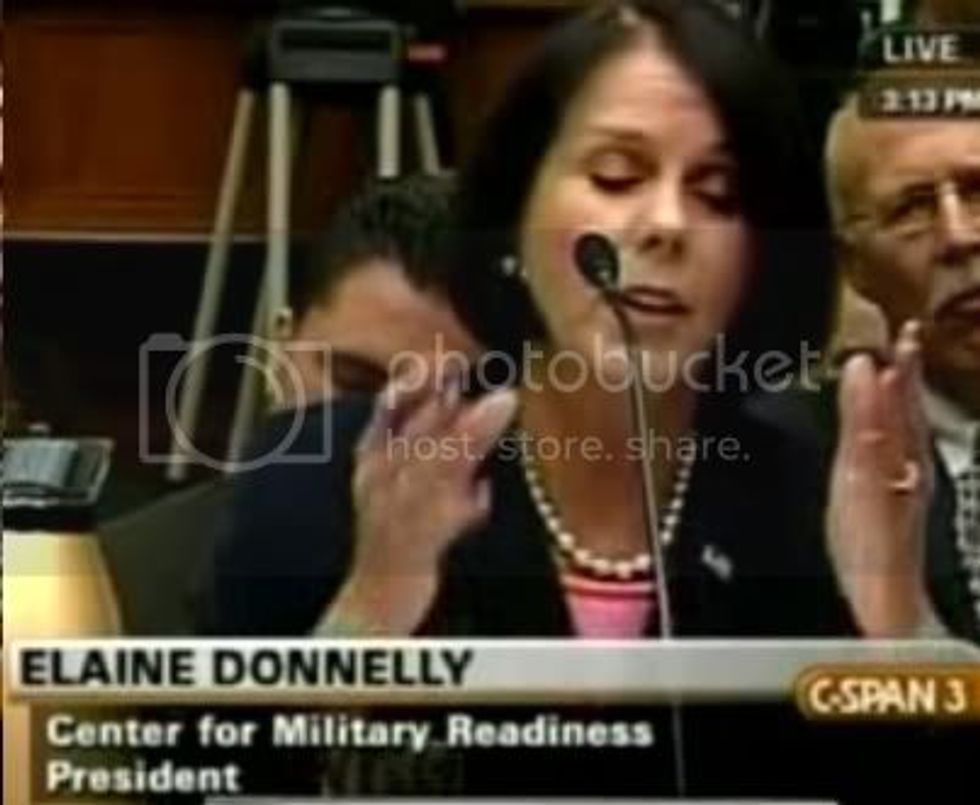 We're talking about real consequences for real people," Donnelly proclaimed. Her written statement added warnings about "inappropriate passive/aggressive actions common in the homosexual community," the prospects of "forcible sodomy" and "exotic forms of sexual expression," and the case of "a group of black lesbians who decided to gang-assault" a fellow soldier.

At the witness table with Donnelly, retired Navy Capt. Joan Darrah, a lesbian, rolled her eyes in disbelief. Retired Marine Staff Sgt. Eric Alva, a gay man who was wounded in Iraq, looked as if he would explode.

Another explanation for the resistance to lifting the ban comes from Michael Hastings of The Hasting Report. His reasoning (though he doesn't support DADT)? That the military won't be able to joke about the homos any more.

In this kind of atmosphere, you find the type of language that you get when you isolate a bunch of dudes in testerone scented quarters. Jokingly, I’ve seen soldiers sit on each others laps, pretend to blow kisses and then some, while continually make sexually suggestive comments to one another. On one embed, the soldiers showed me a video of another solider touching the penis of a donkey. (I won’t name the unit, but it could have been a bad YouTube hit.)

The humor is not meant as malicious, I don’t think, and these are on the whole good guys. It’s just what gets joked about. Call it barracks humor, or call it an homoerotic environment.

...But on some level, the resistance to letting homosexuals in has nothing to do with morale. It has to do with maintaining the macho ideal, a desire to maintain some kind of imagined tradition. A place where men can still be men. And making jokes about gays is part of that. (I’m not condoning the homophobic atmosphere. As I mentioned, I think it’s an unjust prejudice for the military to hold onto. These are just things I’ve observed.)

Military officials probably won’t ever say it like this, but it’s also one of the last politically incorrect things those in uniform can joke about freely. Women, Blacks, Hispanics, Arabs–not cool, off limits, have to be careful about that! Gay jokes, though, are a dime a dozen; they almost always get a laugh.

Wow. Just. Wow. Does it occur to him that the lesbians and gays serving in silence have to listen to the sh*t? It's not as if they aren't there -- the policy is about booting them out, they are already there. That crap doesn't fly.

Hughes, who obviously was also there and can speak to the situation, says the military is more than ready to lift the ban.

Straight and gay soldiers have been fighting side by side in Afghanistan, Iraq and beyond without incident. More than 20 of our closest allies have integrated gays into their ranks, including all of NATO except Turkey. American troops work and live with these forces without incident.

Here at home, every government service is integrated, including the paramilitary sections of the CIA that work hand in glove with the armed services. The presence of gays in these organizations is a nonissue. The idea that our soldiers, sailors, airmen and Marines would have any greater difficulty adjusting is an insult to their professionalism.