Jeb on flailing GOP: give up Reagan worship, the party has no strategy 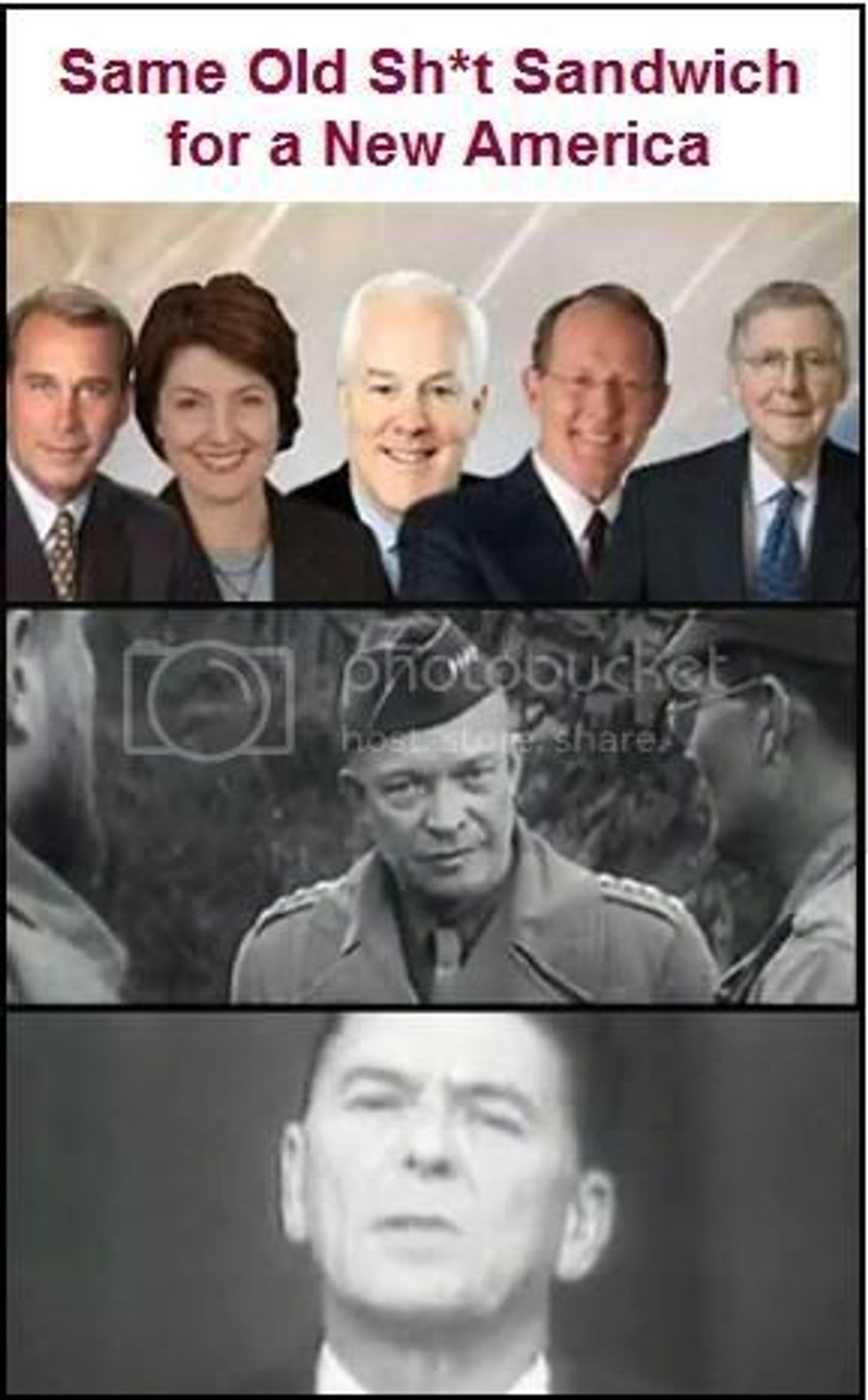 Talk about mixed messages. Just yesterday I blogged about the drop of a new video promoting the GOP's latest effort to rebrand its tired-*ss self, The National Council for a New America, which relied heavily on the imagery of the Reagan "Morning in America" commercials, and even included shots of the Reagan (I included them in the graphic at right), and even Ike!

So with its mostly male, pale, old, retread band of GOP brothers of the NCNA on the road to solicit ideas from "the people," Jeb Bush actually undercuts the mission video by telling the party to move on. Even worse, (and from my POV, hilariously), admits that the Republican party has no strategy, and has no idea how to resurrect itself other than to copy the Dems.

Former Florida Gov. Jeb Bush said Saturday that it's time for the Republican Party to give up its "nostalgia" for the heyday of the Reagan era and look forward, even if it means stealing the winning strategy deployed by Democrats in the 2008 election.

"You can't beat something with nothing, and the other side has something. I don't like it, but they have it, and we have to be respectful and mindful of that," Mr. Bush sai

..."So our ideas need to be forward looking and relevant. I felt like there was a lot of nostalgia and the good old days in the [Republican] messaging. I mean, it's great, but it doesn't draw people toward your cause," Mr. Bush said.

"From the conservative side, it's time for us to listen first, to learn a little bit, to upgrade our message a little bit, to not be nostalgic about the past because, you know, things do ebb and flow."

Man, Jeb, it's pretty clear that if you stray from the current sorry messaging that your party leader Rush Limbaugh will erupt -- and you will have to apologize. Your peers don't know how to listen.

The problem that party faces is that they can't let go of their hero ghosts from the past. Who can blame them? People would be rolling on the floor if they included more contemporary presidents as models for the future of the GOP -- Nixon, Bush I or heaven help them, Bush II.

Aside from the former Dear Leader, most of the voters they are trying to reach see Nixon and Poppy as fossil figures from history books as well. I don't see how the GOP can extract themselves from its conundrum when it is addicted to lies and fear and smear as a "strategy."