Workshop: how to engage on the topic of race and LGBT civil rights

A reader of my blog named Kevin wrote me the other day to say that he is interested in building bridges with people of color (POC) about race and equality but doesn't know how to engage when the conversation turns tense. I asked if I could post his letter to generate discussion because I know he's not the only one out there who had this reaction to my recent blog posts about the topic.

I am a twenty-one-year-old white, gay male living in California. I campaigned for ridiculous amounts of time (seriously, I had a huge void in my life when President Obama was safely elected -- a sign that I was addicted! Or something.) for Obama and against Proposition 8. I was part of the effort in San Diego, California and frequently rubbed arms with POC (as you call them in your HuffPo) people while campaigning for both things.

I wanted to say I just read your post on "Black, Gay and Reclaiming 'Civil Rights'" and I found it to be very inspiring. It also reignited my interest in working toward some form of outreach toward the local black community. I found that while I spoke about Obama and why he was the right choice for America, etc, I had the focus of the people I was talking to 100% (assuming they weren't McCainites) but when I tried to segue into Proposition 8 a lot of people would slip into an interesting... defensive stance? Their demeanor completely shifted to what I liked to call "I am not listening to anything you said while trying to think of a way to escape from this conversation". Anyway, I noticed that certain members of the black community were quick to dismiss me as some kind of white, gay racist. I am not sure when this became such a widespread stereotype, nor am I sure why I of all people was labeled a racist for bringing up a collection of quotes from MLK and Coretta Scott King. My boyfriend is bi-racial (he doesn't like being called 'black or white' and dislikes people being labeled and sorted into groups) and I had to do a lot of convincing to get him to march with me, and to go out and talk to people about Prop 8.

On two separate occasions, while trying to use him to display that I am not at all racist, he was told by the black people we were talking to that he 'gave up' being black when he decided to be gay. I've also tried explaining that my two best friends growing up were both black, though I imagine that probably worked more against me than for me. This isn't just an issue within minorities and several of the white people outwardly called me a faggot on multiple occasions (I live in an oddly socially conservative part of California).

So I guess what I am asking is... how do I establish the dialogue? How do I get through to members of the black community that seem to think if I sneeze on them they will catch some gay disease? I am going to work my ass off again in 2010 and beyond, but I am not able to do it all by myself and you seem to be very educated on the subject.

Well, I'm not exactly well-educated about such things, so much as I have had to deal with inhabiting two worlds that frequently have problems with my very existence because it challenges assumptions they would like to remain intact.

That out of the way, I want to thank you and your boyfriend for being willing to step outside of your comfort zone and take the predictable abuse in order to challenge these black residents on their bigotry. Most people are so scared of being labeled racist by perfect strangers that they avoid the outreach. Honestly, those in the black community who are homophobic don't get challenged enough -- the charges they lob is a defense for not wanting to engage. They know they can play the dreaded race card -- even at black gays, denying their blackness, something I've personally experienced (and it occurred yet again, in the comments of that HuffPost piece).

My suggestions are below the fold. Contribute yours in the comments.

You see, they have no sense of their own hypocrisy -- that not all white gay men are racist, just as not all blacks are homophobic. Both groups tend to cling to the generalizations because there is always a factual basis for any bias or stereotype. The fact is the faces of the LGBT community are largely white gay men. There are no insurmountable reasons for this in this day and time, yet the lack of diversity (including class) in the visible leadership in our organizations continues. It should be no surprise to hear this charge.

However, one should always use a face-to-face interaction as a mutual learning opportunity by actively listening and testing assumptions. When you come up against that wall of resistance -- when the "white, gay racist" retort comes up -- it's going to sting. You can't help feeling slighted but you have to move past it and acknowledge the truth in the statement. You could have said something on the order of:

"I understand why you may feel that way; there are too many in the LGBT community who have not visibly engaged in struggles affecting the black community, but I can't change the past. What I am offering, with my presence here today, is to work for change across the board -- and why this election is important. I want to address all instances of discrimination that have gone long unaddressed. As part of that I would like you to consider voting against Prop 8 because it represents instituting government-based discrimination."

You are: 1) acknowledging a truth; 2) representing that you are both taking personal responsibility as a white gay man to counter racism in the LGBT community; and 3) asking her for support in stopping all discrimination.

BTW, it's doubly difficult sometimes if you bring up MLK or other black civil rights leaders since the people you're meeting with may object out of the box to the "appropriation" of that movement's figures. In fact, some try to explain away or ignore black leaders still with us who support LGBT civil rights, such as John Lewis, Ben Jealous of NAACP national and Julian Bond.

That's my two cents; I'm sure others will be glad to contribute in the comments.

My suggested answer, of course, doesn't even address religious objections to homosexuality; if it hasn't been brought up as a defense shield yet, would likely come up next. One way to respectfully approach scripture being tossed out or that religious freedom is under attack is to discuss the church state separation issue, but the conflation of state/civil marriage with anti-gay people makes this a tough nut to crack. A better approach is to say that this kind of discrimination:

1) Opens the door for government to allow religious discrimination -- ask them about why they would vote for a measure that discriminates against other faiths, including other Christian ones, that DO want to marry gay and lesbian couples.

2) That placing civil rights at the whim of a majority vote at the ballot box endangers all civil rights.

I'm sure other readers have other ideas for you. There is no answer that can cover every encounter you may have when engaging on this challenging topic, but just know that by doing something, rather than sitting back and doing nothing out of fear and the desire to avoid discomfort, that you are making a difference.

Over at my pad, someone suggested that the writer's partnering with his boyfriend on these outreach efforts was in itself racist. My reply:

I don't see partnering with his boyfriend on these outreach efforts as racist; it's a reality that the people they are encountering often refuse to acknowledge that there are POC LGBTs and start right into the attack mode. Obviously his BF went willingly (if apprehensively, knowing what was coming), and the fact is his presence allows the conversation to turn away from invisibility to their ownership of the fact they consider he's turned in his black card. That's their public admission of bigotry.

That's why I have advocated that when canvassing POC neighborhoods that may be hostile to LGBT rights, whites should pair up with someone of color to take that "weapon" out of the hands of those you talk to. These are people who are rarely challenged about their own prejudices. The major problem with this is we have to tackle the racism in the LGBT community that makes it difficult for POC to feel they will be accepted if the come out. So that leaves a movement with precious few POC to rise to the challenge of taking the almost-certain abuse by members of their own communities of color for the goal of full civil equality. A tall order.

If you read through the HuffPost column, POC who were anti-gay tried repeatedly to turn the argument around to "what about racism in the white LGBT community?". That's not an answer to the question being asked (and I've covered that before anyway), nor does it explain away the problem at hand. No one is denying the racism exists in that sphere, it's about pointing out that it's not one way either. You can't address the problem if it's not acknowledged or if it is deflected by tossing out a different question. The bottom line is a good number homophobic POC want to change the subject rather than own up to the problem that is costing those community lives -- exploding HIV/AIDS rates -- because of their silence and promotion of homophobia in the pews. 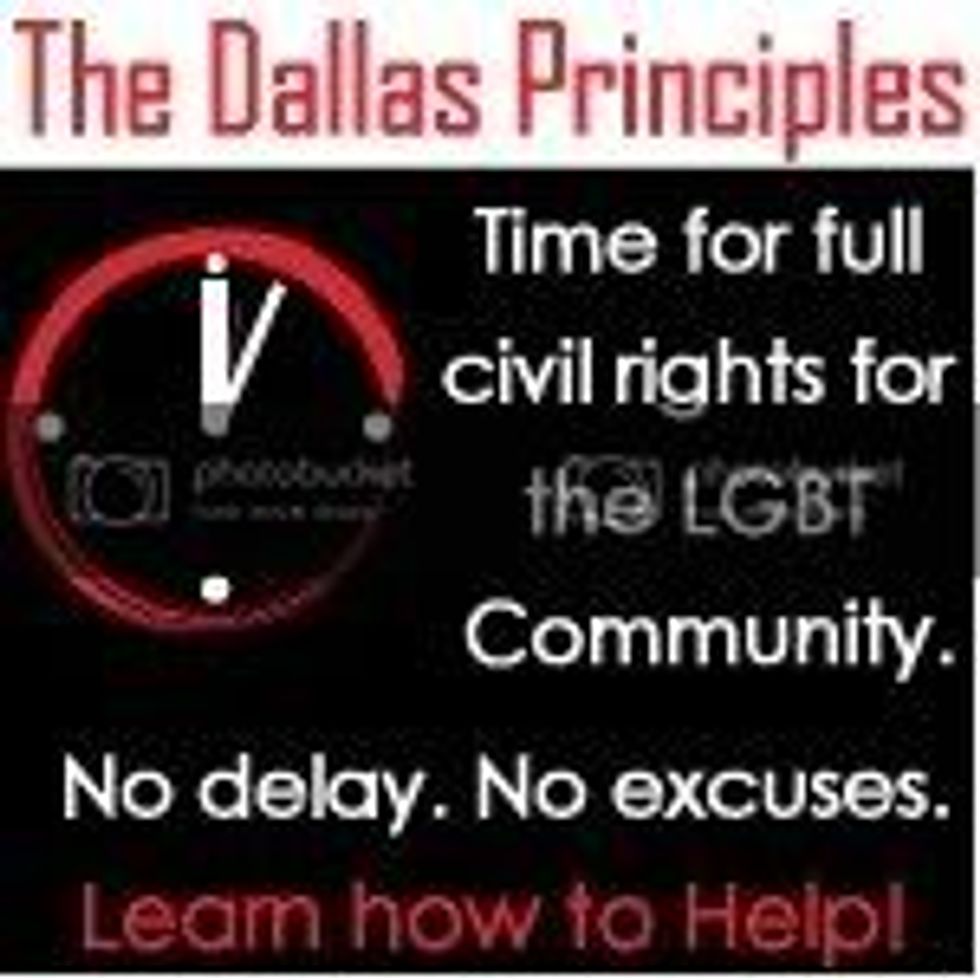 NOTE: These discussions are essential and The Dallas Principles are something to keep in mind when you are facing this uphill battle, particularly 3-6 in this context. Kevin and his boyfriend are participating in the kind of activism that does change hearts and minds. Even for those who disagree, they have been in engaged in a way that forces them to confront their biases.

1. Full civil rights for lesbian, gay, bisexual and transgender individuals must be enacted now. Delay and excuses are no longer acceptable.

2. We will not leave any part of our community behind.

4. Religious beliefs are not a basis upon which to affirm or deny civil rights.

5. The establishment and guardianship of full civil rights is a non-partisan issue.

6. Individual involvement and grassroots action are paramount to success and must be encouraged.

7. Success is measured by the civil rights we all achieve, not by words, access or money raised.

8. Those who seek our support are expected to commit to these principles.