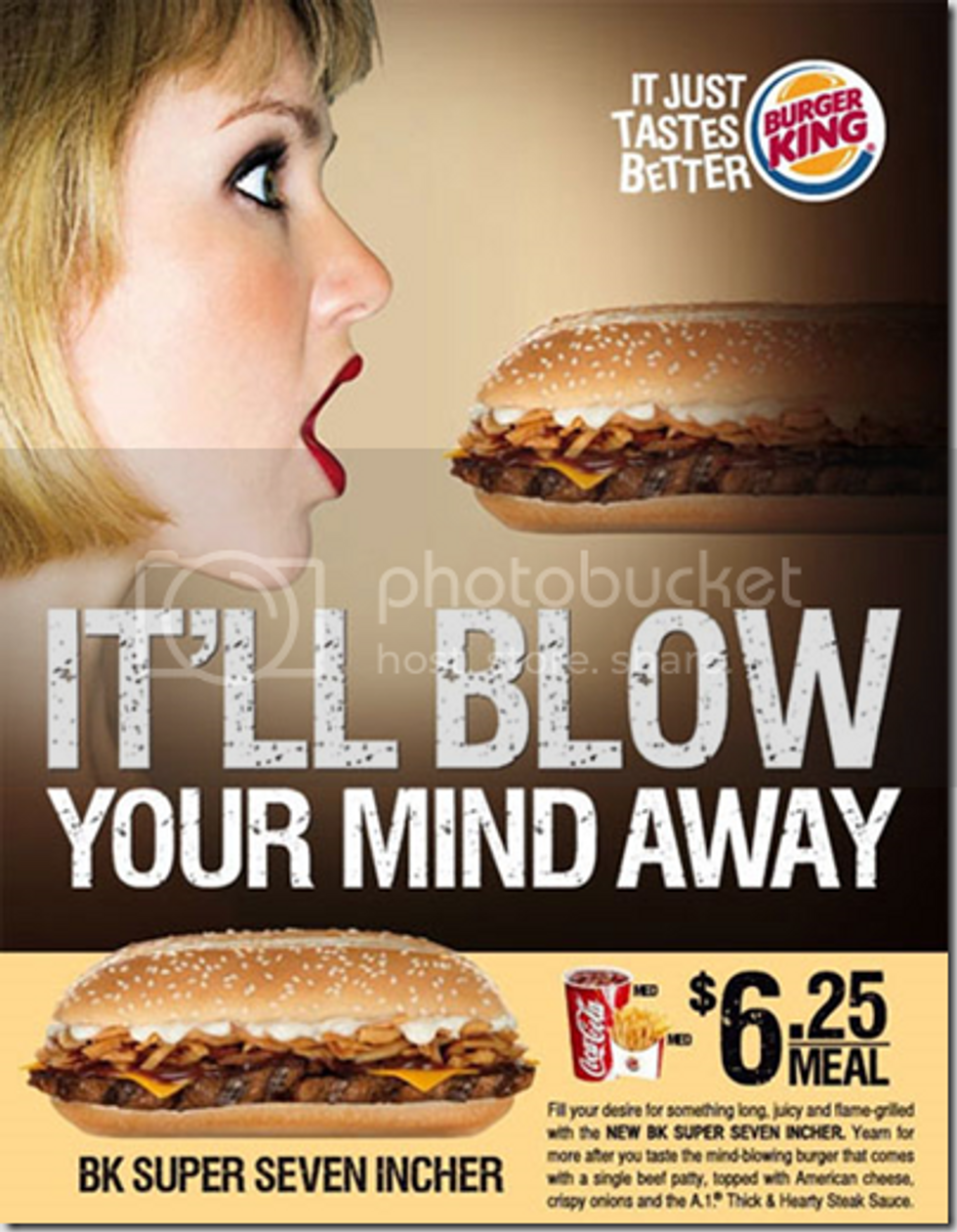 Let me a wild guess -- this ad was approved by a boardroom full of guys who thought this was a great, subtle play on frat boy humor. The details of the ad:

"IT'LL BLOW YOUR MIND AWAY. Fill your desire for something long, juicy and flame-grilled with the NEW BK SUPER SEVEN INCHER. Yearn for more after you taste the mind-blowing burger that comes with a single beef patty, topped with American cheese, crispy onions and the A1 Thick and Hearty Steak Sauce."

What are the odds that Burger King execs appealed to men with a similar ad? Ummmm. Zero -- though I would have liked to have seen the target audience's reaction to that. Womanist Musings:

Why don’t they just say choke on it bitch, because that is clearly what the image and the language of this advertisement is implying? Using sex to sell is a common tactic in advertising, however this particular ad is demeaning and reductive. This woman isn’t fulfilling her needs by consuming this meal, she is performing a service.

This ad was run in Singapore -- what dolts at BK thought that image wasn't going to get loose on "the Internets"? It has now hit the MSM, and somehow, the rep from Burger King thinks that because it appears in a foreign country and was produced by a local ad firm that somehow the 7-inch-sandwich seller is off the responsibility hook (Faux News):

Lauren Kuziner, a spokeswoman for Burger King, said the campaign was produced by a local Singaporean agency and not by the company's U.S. advertising firm, Crispin Porter + Bogusky.

"Burger King Corp. values and respects all of its guests," Kuziner said in a statement to FOXNews.com. "This print ad is running to support a limited time promotion in the Singapore market and is not running in the U.S. or any other markets. The campaign is supported by the franchisee in Singapore and has generated positive consumer sales around this limited time product offer in that market."

Kuziner declined to identify the Singapore-based firm and did not respond to requests for comment on whether Burger King had received complaints in connection to the advertisement.

Meanwhile, Scott Purvis, president of Gallup & Robinson, a marketing and advertising research firm in New Jersey, said the print pitch went "too far" and seemed unusual for a global brand like Burger King.

"This would be the kind of ad you might see for a smaller brand trying to get itself noticed," Purvis said. "It's probably something that wouldn't see the light of day in this country."

Have it your way, indeed, BK.