I am not sh*tting you, people. The Cambridge cop who arrested Dr. Henry Louis Gates in his own home told the press that he's not racist, as Gates has charged, because he tried to save the life of Celtics star Reggie Lewis 16 years ago by giving him CPR. I was IMing with Mike Signorile when he dropped the link in from the Boston Herald and I thought he was playing me. Nope.

“I wasn’t working on Reggie Lewis the basketball star. I wasn’t working on a black man. I was working on another human being,” Sgt. James Crowley, in an exclusive interview with the Herald, said of the forward’s fatal heart attack July 27, 1993, at age 27 during an off-season practice at Brandeis University, where Crowley was a campus police officer.

It’s a date Crowley still can recite by rote - and he still recalls the pain he suffered when people back then questioned whether he had done enough to save the black athlete. “Some people were saying ‘There’s the guy who killed Reggie Lewis’ afterward. I was broken-hearted. I cried for many nights,” he said.

Crowley, 42, said he’s not a racist, despite how some have cast his actions in the Gates case. “Those who know me know I’m not,” he said.

Needless to say, I was laughing so hard at this that I had tears streaming down my face. OK. How many ways is this man's reasoning absolute jackassery. As a campus police officer who is trained in CPR, did he think he had the option to refuse to give mouth-to-mouth to Lewis? Are we supposed to think he was so heroic that he was willing to touch his mouth to the lips of a black man in front of all those people? Honestly, this only raises some seriously uncomfortable questions about Crowley's thinking if he's using this to somehow "prove" he isn't racist. For instance, Lewis was a superstar, a black man, and, as Crowley observed, a human being. One presumes all human beings are equal and he would be comfortable with giving mouth to mouth to, say, RuPaul, or Halle Berry, or the janitor who sweeps the courts after a game. It's all good, right? I don't know what this cop is trying to get at with this tale -- to show he's down with the brown?

The real issue here, and it will likely not be discussed nearly as much as the race angle, is the class angle. Professor Gates, during his angry tête-à-tête with Crowley, tossed down the "don't you know who I am" card (to be precise, in the report it says Gates told him he had "no idea who he was messing with"). I know that I can't stand it when people in Gates's position and station drop that sh*t as a trump card (trust me, I see it first-hand all the time in academia to name one field), so imagine this officer, who clearly is in a different socioeconomic universe than Gates. It's one thing to be a famous black b-baller dying on the floor, it's another matter altogether when the other person might be perceived as a spoiled academic who's looking down at you and verbally abusing you.

Now that is no excuse for Crowley's incomprehensible arrest of Gates for yelling at him after the prof had already provided two forms of ID to prove who he is and that he lived in the residence, it's simply another factor that must be considered in this mess -- something that will obviously receive less play in the press than race, since class is also a third rail topic much of the time.

What do you think?

Oh, and about the Gates case, Crowley doesn't offer an apology of any kind.

Though he harbors no “ill feelings toward the professor,” a calm, resolute Crowley said no mea culpa will be forthcoming. “I just have nothing to apologize for,” he said. “It will never happen.”

Irene Monroe, who guest posts every so often at my pad, also shares her view of Cambridge, its police and how race and class are at play in this incident. 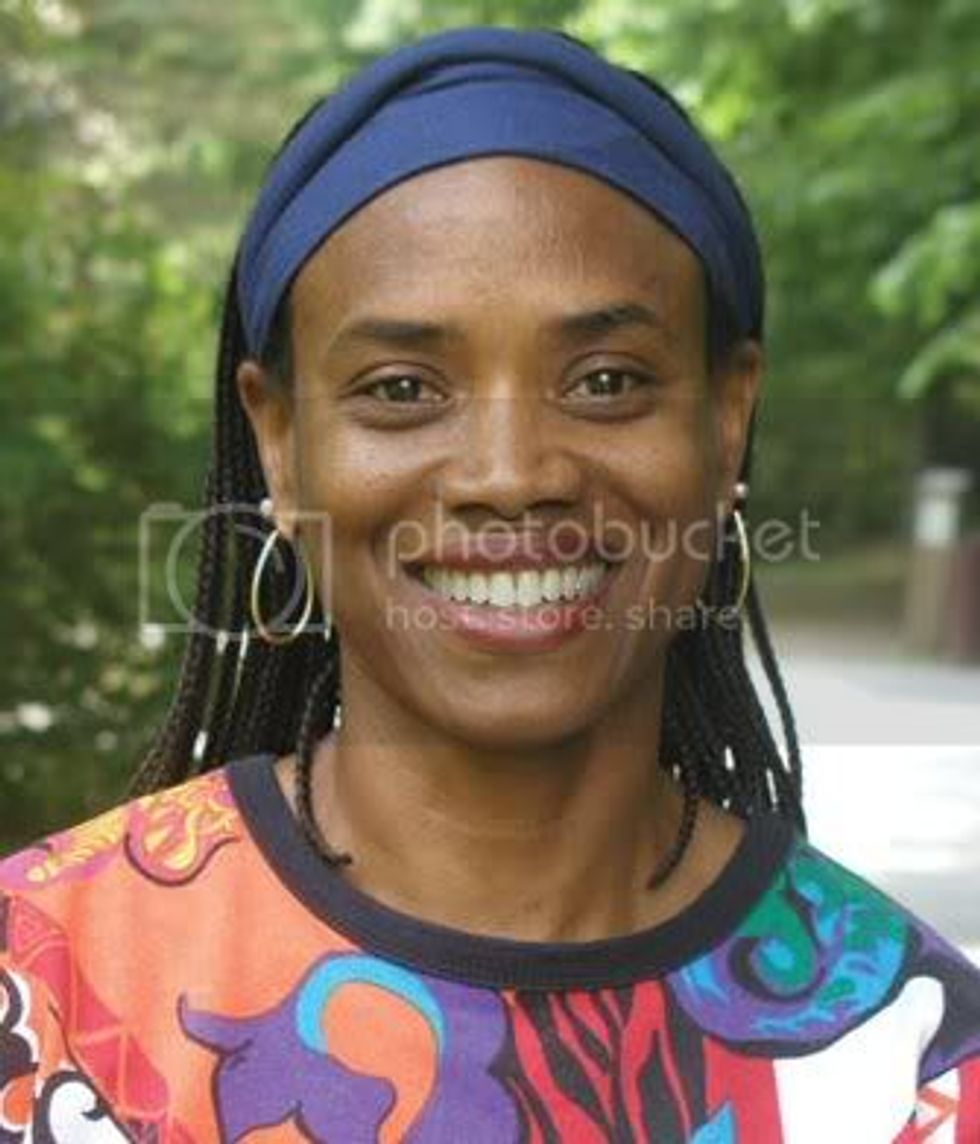 Living while Black in Cambridge

None of us African-American residents of Cambridge are surprised or shocked by the humiliation and harassment Professor Henry Louis Gates, Jr., 58, of Harvard University encountered at the hands of Cambridge police.

My partner, Dr.Thea James, an Emergency Room physician who would drive from home to work was stopped all the time for “driving while black.” And when the Cambridge cops realized she’s a woman, and a lesbian one at that, their unbridled homophobia surfaces. Thea now takes the bus.

These constant shakedowns of us have been deliberately on the down low to the public because Cambridge, proudly dubbed as "The People's Republic of Cambridge, is ranked as one of the most liberal cities in America. And with two of the country's premier institutions of higher learning - Harvard and Massachusetts Institute of Technology- that draw students and scholars from around the world, Cambridge's showcase of diversity and multiculturalism rivals that of the U.N.

Cambridge is no doubt a progressive city. However, when you scratch below Cambridge's surface there is also a liberal racism that is as pernicious, vile, and intolerant as Southern racism. But unlike Southern racism that sees race and tries to keep blacks in their place, liberal racism claims it does not. Ironically, however, Cambridge's liberal ruling class maintains its racial boundaries not by designated “colored” water fountains, toilets or restaurants, but rather by its zip codes, major street intersections known as squares, like the renown Harvard Square; and residential border areas that are designated numbers, like the notorious Area 4, a predominately black poor and working-class enclave.

It did not matter that the call to police by a white woman, who doesn't live on the block let alone the area, stating that two African-American men were breaking and entering into one of the expensive homes on a tree-lined street was not only false but actually Gates's home. The woman’s call was her civic duty in preserving the neighborhood’s integrity. because after all this was happening in the zip code area of 02138, which is Harvard Square.

And it did not matter that once Gates validated his residency to the cop with a legitimate Harvard I.D. that the whole incident should have, at that very moment, ended. But instead the arresting officer called the Harvard University police to once again verify Gates occupancy in his own home.

Also, it did not matter that the suspected robber is a Harvard professor, public intellectual and recipient of the MacArthur Foundation "genius" award. (Some say this incident serves as a cautionary tale to those who want to now define America as being post-racial with the election of Obama.)

What was of great concern for both the white woman who called the police and the arresting office who eventually had to handcuff Gates was the shock and perhaps outrage they experienced seeing this unknown black man in this well-known, high income, and professional area of Cambridge breaking and entering into someone home’s and not in the city’s known and expected troubled spot- Area 4?

Segregation in this city is not only along race lines but also class. And poor working-class whites and white immigrants do not experience the fullness their white skin privilege would abundantly afford them if they too were part of Cambridge’s professional and/or moneyed class.

Area 4 has been labeled a troubled area of Cambridge, an area plagued with all the problems of urban blight and very little resources to ameliorate them. As a densely populated area, its average household income was $34,306 according the 2005 city census. Harvard Square, on the other hand, in the same year its average household income was $79,533.

Area 4 use to house the city’s police station. And white Cambridge police officers assigned to this area unabashedly target and harassingly patrol neighborhood blocks and activities of black male residents- young and old. And their reasons for doing so can easily be attributed to the Cambridge Police Department’s lack of funds in its budget to do cultural sensitivity trainings. But their reason is just as much about this country’s horrific racial legacy between the two groups as it is also about Cambridge's liberal ruling elite exploiting these tension by their claims to not see race, until of course, an unknown black man appears in their neighborhood

The tension escalated between Gates and Sgt. James Crowley when Gates flipped the script on him. As the person-in-questioned Gates exercised his legal right to also question:

“Is this happening because you're a white cop and I'm a black man? Is this why this interaction is still taking place? ''

The charges against Gates have been dropped. But many white Cantabrigians chiming in on this incident felt that Gates was being uppity, feeling entitled, and exploiting the race card.

And who would know better about this than them.