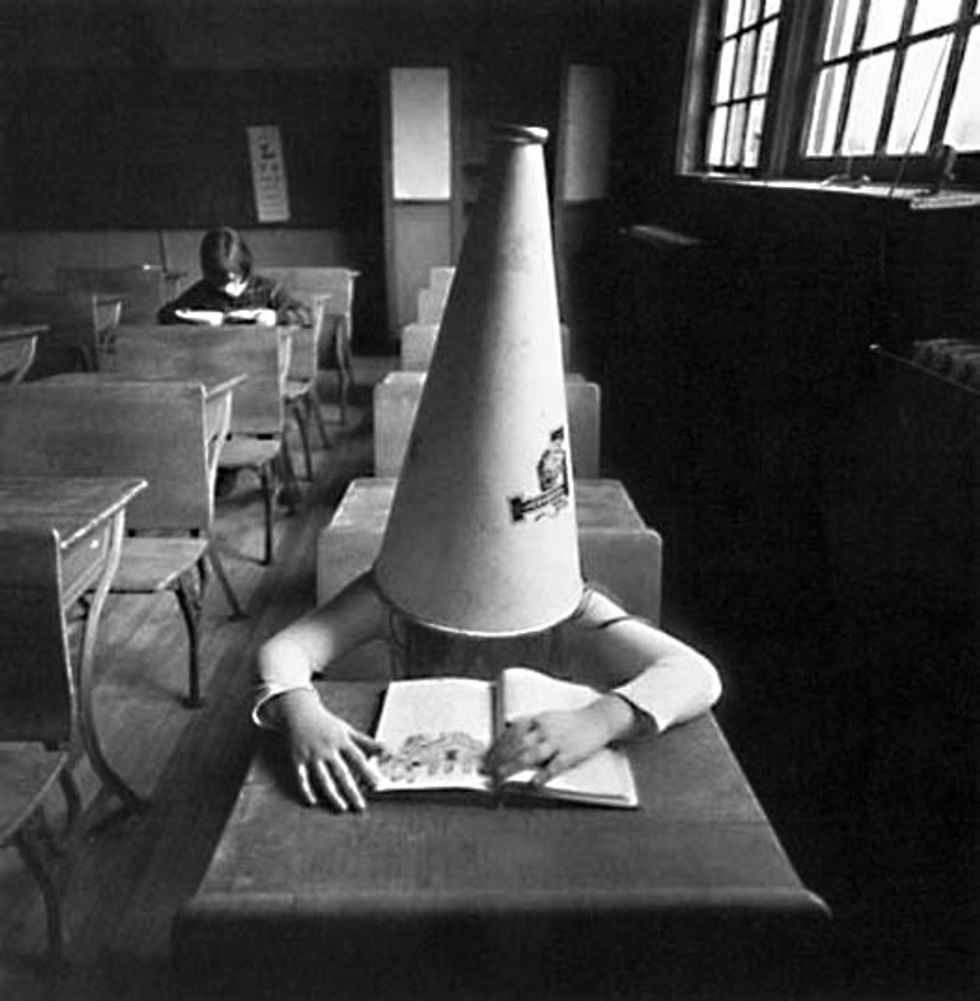 Thanks to reader abo gato for alerting me to this Express-News story that forced me to hurt myself rolling my eyes. It's a story about how Rick Perry is considering appointing a fundamentalist wingnut to head the State School Board, so soon after the forces of good ousted State Board of Education Chairman Don McLeroy because he disagreed with the existence of evolutionary biology, though I'm not sure if he was pro- or anti-the theory of gravity or the round earth theory. McLeroy and now the new candidate Cynthia Dunbar are objectionable because they reject the idea of basic education, not that you'd know that from the first third of the article.

Critics who engineered the recent ouster of State Board of Education Chairman Don McLeroy, in part because of his strong religious beliefs, could end up with someone even more outspoken in her faith.

Cynthia Dunbar, R-Richardson, who advocated more Christianity in the public square last year with the publication of her book, “One Nation Under God,” is among those that Gov. Rick Perry is considering to lead the State Board of Education, some of her colleagues say.

Speculation that Dunbar, a lawyer, could win a promotion to the leadership spot has triggered gasps from her critics but support from allies.

“It would certainly cause angst among the same members of the pagan left that rejected Don McLeroy because he was a man of faith,” said David Bradley, R-Beaumont, one of the seven socially conservative members on the 15-person board.

Yes, we have someone being quoted uncritically as saying that McLeroy was ousted by a bunch of pagans who saw him as religious competition, not that their "pagan" religion means that they're "people of faith", which is obviously a euphemism for "Christian", and "Christian" in this context means specifically someone who believes that Abraham rode a dinosaur on his way to sacrifice Isaac. I swear to god, to read some of these articles, you need translation software. McLeroy was objectionable because he wanted to put a very specific religious dogma into the science classroom. His personal faith was irrelevant to the debate. He could worship a box of Kellogs for all that most critics could care, but if he wanted to use the science classroom to prove that life emerged when god poured milk into corn flakes, we'd have a problem. The author of this kind of glances against the reality of the situation towards the end of the article, but it's mostly conveyed through self-serving fundie euphemisms.

At least the objections to Cynthia Dunbar are clearly stated in the 9th paragraph of this article---it's not that she's a "person of faith", it's that she's a super wingnut who objects to the very existence of the institution that Perry wants her to head up.

In a book published last year, Dunbar argued the country's founding fathers created “an emphatically Christian government” and that government should be guided by a “biblical litmus test.” She endorses a belief system that requires “any person desiring to govern have a sincere knowledge and appreciation for the Word of God in order to rightly govern.”

Also in the book, she calls public education a “subtly deceptive tool of perversion.”

The establishment of public schools is unconstitutional and even “tyrannical,” she wrote, because it threatens the authority of families, granted by God through Scripture, to direct the instruction of their children.

Dunbar home-schooled her own children.

So, on top of the problem of having a school board head who objects to the very existence of public education, you have someone who doesn't know that the Constitution and Bible are separate documents. It's also questionable whether the woman who wishes to be put in charge of the education of all the children of Texas can read, either, because she seems completely unaware of what's actually in the texts that she is mixing up. Neither the Bible nor the Constitution, as far as I know, objects to the idea that children go to school. It's been awhile since I've read the Bible, but I seem to recall that being educated by people not your mother is referenced a few times, and no one is hit with lightening bolts for it.

But the best part is her insistence that there's stuff in the Constitution that is the direct opposite of what the Constitution says. Dunbar insists that the government should be theocratic, and that elected officials should have to prove that they're Christians (presumably the kind that know more about what's actually in the Bible than Dunbar) in order to govern. What does the Constitution say about this?

The Senators and Representatives before mentioned, and the Members of the several State Legislatures, and all executive and judicial Officers, both of the United States and of the several States, shall be bound by Oath or Affirmation, to support this Constitution; but no religious test shall ever be required as a qualification to any office or public trust under the United States.

We don't have religious tests, but perhaps anyone who wants to be on the Texas school board should be able to pass the same reading comprehension tests that kids have to pass to graduate from high school here. How awesome would it be to give people like Dunbar sections of the Constitution like this one and ask them to explain it? Forget the whole "person of faith" nonsense---we can straight up argue that people who can't pass the minimum standards of reading comprehension to graduate high school in the state of Texas should not be able to sit on the State School Board.