FBI may have destroyed files on Walter Cronkite 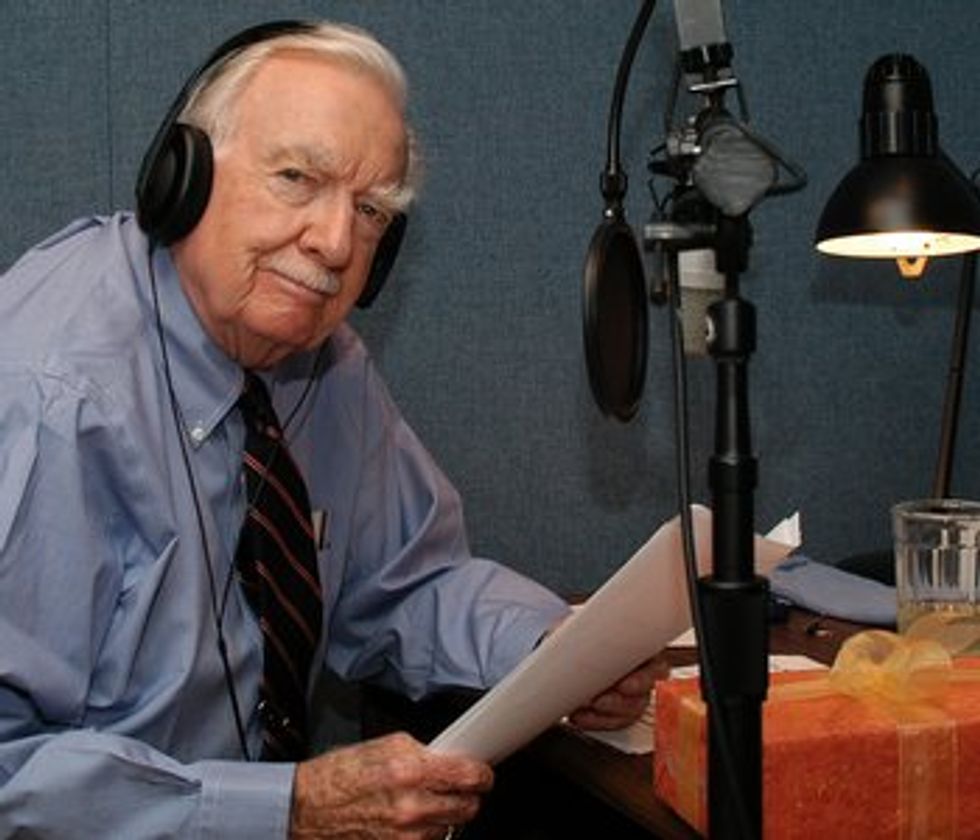 FBI spokesman: 'We would need warehouses to keep everything we've collected'

Officials with the Federal Bureau of Investigation said they may have destroyed files on legendary newsman Walter Cronkite in an October 2007 document purge.

Blogger and San Francisco-based gay activist Michael Petrelis filed a Freedom of Information Act request after the CBS anchorman's death in mid-July for access to FBI documents containing Walter Cronkite's name. The FBI restricts third-party access to information about individuals while they are still alive, but makes it possible for people to request copies of someone else's FBI files after they have passed away.

The FBI's August 25th response, however, indicated only that they may have had files on Cronkite, but if so, those files were likely destroyed roughly two years before Cronkite's death.

Click on the image below to see the complete FBI response letter in PDF format.

"A main index record carries the names of subjects of FBI investigations," the letter to Petrelis said. "Records which may be responsive to your Freedom of Information-Privacy Acts (FOIPA) request were destroyed on October 9, 2007. Since this material could not be reviewed, it is not known if it was responsive to your request."

FBI spokesman Bill Carter told Raw Story that the destruction of the potential Cronkite files could be related to the FBI's "fifty-year-rule," that allows them to toss old files after fifty years of storage. The FBI is required to allow the National Archives to review the documents for historic value before destruction.

"We would need warehouses to keep everything we've collected," Carter said to Raw Story. "Because of space limitations, there is a constant review of old files to determine if anything we have is of historical value. If it is, it should be retained. If not, it's destroyed."

Petrelis said he was disturbed to learn the FBI was in the habit of destroying any files, and even more upset they weren't able to confirm exactly what documents had been destroyed in 2007.

"I would like to know, regardless of who the file may be on, that at a minimum the FBI is looking at the files they are destroying before they are being destroyed," Petrelis told Raw Story.

FOIA experts, however, said that the FBI is only required to follow its own rules regarding destruction of documents.

"As long as they are following their policy, and the National Archives didn't think the information was useful, then all public bodies have record retention and destruction policies," Lucy Dalglish, executive director of The Reporters Committee for Freedom of the Press, said in a phone interview with Raw Story. "It would be nice if they were to keep it, but as long as they are following their policies, they have a right to do that."

Last year, students at the City University of New York's graduate school of journalism revealed that the FBI had tracked Pulitzer-Prize winning reporter David Halberstam for more than two decades: "The FBI monitored Halberstam's reporting, and at times his personal life, from at least the mid-1960s until at least the late '80s, the documents show," according to the Huffington Post.

But Quinnipiac University Professor Edward Alwood, who wrote the book "Dark Days in the Newsroom: McCarthyism Aimed at the Press," said he didn't know of any reason the FBI would have tracked Cronkite.

Alwood noted, however, that "the Newspaper Guild had communists in it," and because of that, any journalist who was a member of the union was considered suspicious by the FBI.

Cronkite said in a 2004 speech that he had been chairman of a committee that voted to approve the first Guild strike against the wire service "United Press."

One of Cronkite's closest friends, Mike Ashford, said he wouldn't be surprised if Cronkite's name showed up in FBI files, but that it was probably for innocuous reasons.

"He was routinely in the company of presidents and received clearance to enter secret places like a nuclear submarine," Ashford, who spoke at Cronkite's funeral, told Raw Story. "If there was anything on him, it probably said: 'He's a good guy and okay to have dinner with the president.' Walter was never fretting about the FBI following him around."