Dammit, instead of going to the animal shelter to see the dogs, Kate and I should have taken the opportunity to rub shoulders with the queen of Opposite Marriage in the wingnut movement, disgraced Miss California Carrie Prejean, who was in the Triangle to stimulate intellectual discussion during her lunch keynote at the 4th Annual NC Conservative Leadership Conference, sponsored by the John William Pope Civitas Institute.

This is a gathering of the good-old-boy set and economic/fiscal conservative crowd. 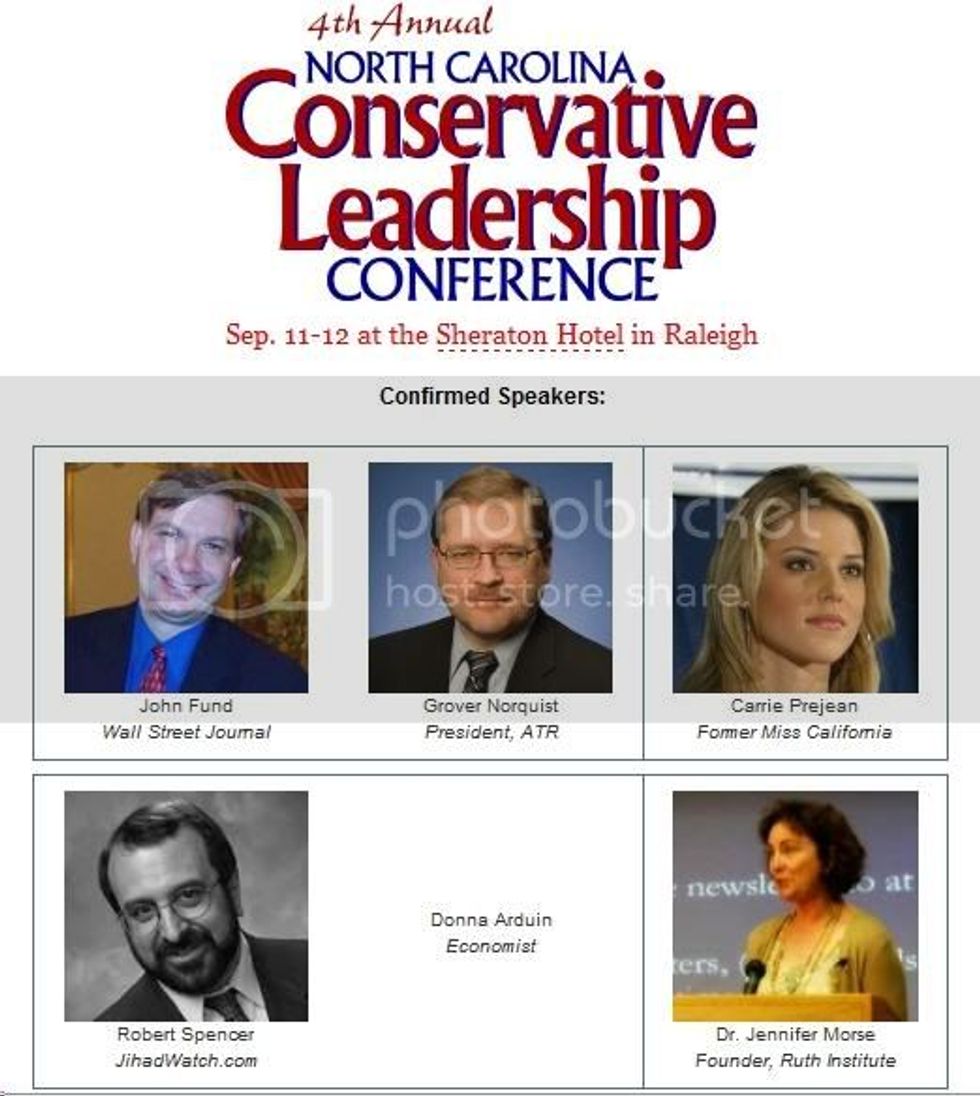 Trust me, the bible-beating wingnuts still have a stranglehold on the NC GOP. "Limited government" for Republicans here doesn't include staying out of people's bedrooms.

According to the N&O, Prejean gave the usual stump speech about being persecuted for her beliefs about marriage by the Miss USA Pageant. I doubt her Piousness brought up her topless modeling photos or the contract terms she broke that caused pageant officials to yank her crown. Also, a group of progressives from Durham attended as the eyes and ears of the reality-based residents in the state.

"It has illuminated why the extreme right-wing grass-roots are so cynical and hateful," said Lanya Shapiro, executive director of Traction Action Fund, a social network of activists. [here's Traction on FB]

"Their leaders call the left evil and power-grabbing," Shapiro said. "We want to know what we're up against."

Friday featured Grover Norquist of Americans for Tax Reform along with the author of "The Politically Incorrect Guide to Islam," Robert Spencer. How could I have missed the "Ongoing Terror Symposium"?

And look at what I missed on Saturday...plus: if you want to see how the wingnuts put on a real slamming fest, check out some video from last year's conference below the fold, complete with move-to-the-beat elevator music...

* Career Opportunity: The Koch Associate Program Information Session with the Koch Foundation
* How To Be Heard on the Radio & Write an Op-Ed
* How To Take On City Hall
* Decline of the Newspaper
* Transparency in Local Governement
* Talk Radio Panel
* Marriage Education

The 2008 con featured failed gubernatorial candidate and Charlotte mayor Pat McCrory, failed SCOTUS nom Robert Bork and rejected former Senator Liddy Dole (whose latest cosmetic enhancement results look quite painful). Apologies in advance -- trust me, a good deal of the Carrie Prejean crowd is dying out in North Carolina. If anyone can bear watching the whole 21 minute video, let me know if you see any people of color. Hotel employees don't count, lol.