KO let Wilson and the GOP have it in his Special Comment (transcript via C&L):

And finally, as promised, a Special Comment about the shout of "You Lie" during the presidential address to the joint session of Congress last night on the matter of health care reform.

The 43rd president of the United States lied the nation into the war, lied 4,343 of his fellow citizens to death in that war, lied about upholding the constitution, and lied about Weapons of Mass Destruction.

He lied about nation-building in Iraq, lied about the appearance of new buildings **in** the nation **of** Iraq, and lied about embassy buildings in nations like Iraq.

He and his administration lied -- by the counting of one non-profit group -- 532 times about links between Al-Qaeda and Iraq. Only 28 of those were by that President, but he made up for that by lying 231 times about W-M-D.

And yet not once did an elected Democratic official shout out during one of George W. Bush's speeches and call him a "liar."

More of the smackdown below the fold.

Even when the president was George W. Bush, even when he was assailed from sidelines like mine, even when the lies came down so thick the nation needed a hat... he was still the President and if he didn't earn any respect, the office he held demanded respect.

More over, that President and his Congressional tools like Congressman Addison Graves "Joe" Wilson of South Carolina insisted not just unquestioned respect for the office; they wanted unanimous lock-step compliance with the man.

And when the blasphemy of mere respectful criticism somehow came anyway -- say by, or built on that by, the real Joe Wilson -- lord help he who might have made the slightest factual error in that criticism.

Congressman Wilson and his masters and the flying monkeys of right-wing media would pursue the erroneous critic to the ends of their careers, firing hot accusations of moral or intellectual confusion and incompetence at the unbelievers.

And that is the line Congressman Wilson crossed last night when he shouted "you lie" at this President of the United States.

Not the respect line.

"This evening I let my emotions get the best of me when listening to the President's remarks regarding the coverage of illegal immigrants in the health care bill," you hurriedly said last night as a nation caved in on you, and your own party's leadership coerced you into saying something. "While I disagree with the President's statements, my comments were inappropriate and regrettable. I extend sincere apologies to the President for this lack of civility."

For the lack of civility, Congressman?

Is that what you think this is about?

Of course your comments were inappropriate and regrettable -- you are a Republican trying to de-legitimize the elected president of the United States -- that's all you do, and that's all you've got.

Of course you let your emotions get the best of you. At a figure of $435,296 in campaign donations from the Health Sector, of course your emotions would take over when your gravy train was threatened.

It isn't about "inappropriate and regrettable," Sir!

House Bill 3200 specifically says, Sir, in language made precise and binding -- in section 246 -- under the heading, quote:

"NO FEDERAL PAYMENT FOR UNDOCUMENTED ALIENS"

For the benefit of the factually-challenged!

"Nothing in this subtitle shall allow Federal payments for affordability credits on behalf of individuals who are not lawfully present in the United States."

You got it wrong!

The bill says those here illegally will not be covered; yet whether through stupidity or a willful attempt to mislead the gullible, you decided to spend whatever credibility remained to you, on a position in which you are utterly, inarguably, and -- in a manner obvious to newborns and the more sophisticated of farm animals -- wrong!

You apologize for your lack of civility?

When are you going to apologize for your lack of... being right?

Whatever it is, it's congenital.

Wrong-Way Wilson just wrote an op-ed, on August 27th for the Columbia, South Carolina newspaper "The State," about the non-existent death panels that he and Mrs. Palin saw in their dreams -- or something:

"Those who have stood up and shown up to have their voices heard have already made a difference in this debate."

Perhaps henceforth Mr. Wilson should soft-pedal the "have their voices heard" part.

"...citizens have discovered and brought to light numerous aspects of the health care overhaul (H.R. 3200) that are deeply troubling. These include the end of life counseling program, which has been correctly highlighted by former Alaska Gov. Sarah Palin as a program which could lead to seniors being encouraged to seek less care in order to protect the government's bottom line."

Perhaps henceforth Mr. Wilson should soft-pedal the Palin Paranoia, since **he** caught enough of it that last night, he made himself look like an uninformed eight-year old screaming at an adult.

Perhaps henceforth Mr. Wilson should remember that the word "honest" is as important as the word "debate."

The latter without the former is better known as Political Tourette's Syndrome.

The evidence that Wrong-Way Wilson and reality are strangers goes back much further than last night.

Worse, he accused Filner of a quote "hatred of America," and insisted "you shouldn't say that" and "you should retract it" and "you know it is not true."

It had been confirmed by the Commerce Department... in 1994. 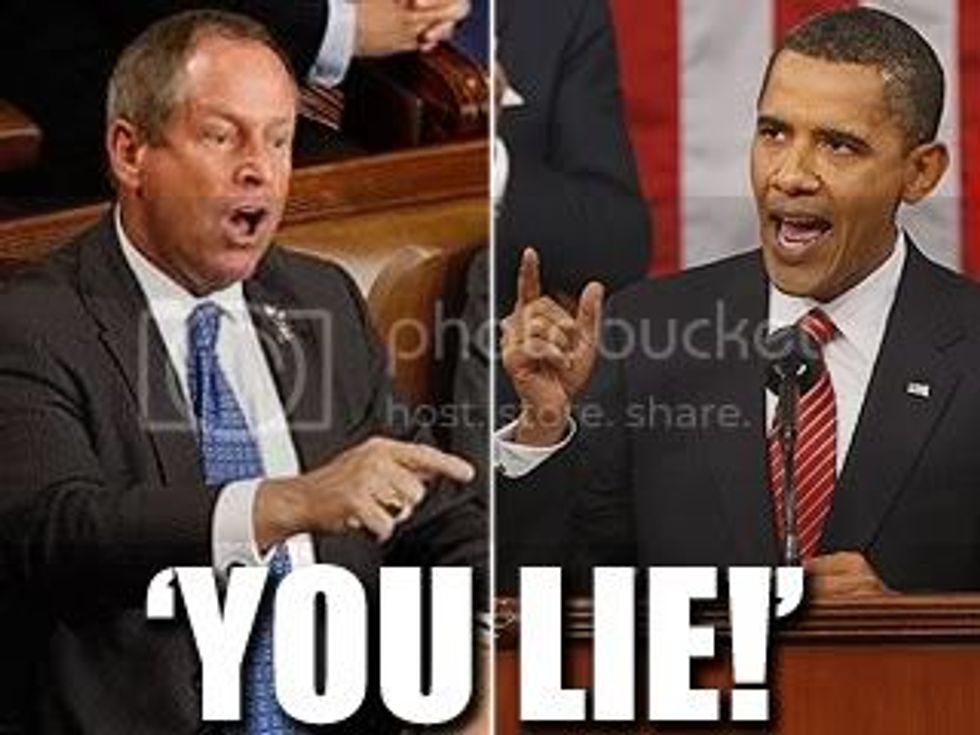 A year later, when it was asserted that Senator Strom Thurmond from Wrong-Way's home state had fathered a daughter with a black woman, Mr. Wilson called the assertion a quote "smear on the image" of Senator Thurmond.

This was after Senator Thurmond's family had acknowledged not just paternity, but the fact that the Senator had maintained a secret relationship with his daughter, and provided her money, for decades.

**After** this was admitted, Congressman Wilson considered references to it a "smear" and said Thurmond's daughter should have kept it to herself.

Coincidence, of course, Wrong-Way, that it would be **you** who would consider the confirmed, acknowledged bi-racial child of Strom Thurmond as a "smear"...

And then it would again be you who -- in the middle of a festival of blind racial rage dressed up as a health care debate -- would shout out, "you lie" at a bi-racial President of the United States as he addressed Congress.

And just a coincidence that you're a member of a radicalized, insurrection-glorifying group, accused of harboring white supremacists, called "Sons Of Confederate Veterans."

Back to **this** incident. You have swallowed some of the Kool-Aid you mix up for those damn fools who believe you, Congressman.

You sounded as pathetic as one of those poor souls, stampeded by corporate funding from the insurance and health care industries, who shout out nonsense at those demonstrations of willful stupidity that have been mislabeled "Town Halls"… these places where a citizen's life is reduced to acting out that ridiculous maxim, if you're going to be wrong, be wrong at the top of your voice.

Town Halls, Death Panels, Oligarhys, a multi-racial president who is accused of hating half his own ancestry, neuroses about communist artwork, the idea that fascism and socialism aren't mutually exclusive, grass-roots protests bought and paid for by lobbyists and corporations, scared seniors terrified enough to turn to insurance companies for protection against reformers who want to increase their coverage and cut their rates, birchers, birthers, deathers, the voices in Michele Bachmann's head, the Republican rebuttal to the President of the United States given by a guy who thought he could become "Lord Boustany" by paying a couple of English con men…

And now to top off this pile of stupidity: Congressman Wrong-Way Wilson, who -- when a President publicly, and ostentatiously, gave credit for part of his health care reform proposal to the very Republican he swamped in the election last year -- Wrong-Way Wilson... followed that bi-partisan gesture, by shouting "you lie" as soon as he heard the truth.

It is rank, willful stupidity.

When did we come to extol stupidity ahead of information, and rely on voo-doo, superstition, and prejudice ahead of education?

How many Republicans believe in Death Panels... and Brownies and Elves?

When did we start to listen to -- to elect -- the impregnably dense?
I was almost too fearful of using the word "impregnably" because of the prospect that Governor Palin would go after me the way she went after Letterman.

The time has come to rise up and take this country back, to again make it safe... for people who actually completed the seventh grade.
The crime of Wrong-Way Wilson was not reflected in his emotions, nor his disagreement, nor his inappropriate conduct, nor in his incivility. It was in his prideful wrong-ness.

There are many vague portions of this bill, but section 246 says it plain: "NO FEDERAL PAYMENT FOR UNDOCUMENTED ALIENS."

I defend Congressman Wilson's right to incivility. A little incivility six years ago might have stopped the Iraq war. He can shout anything he wants, at anybody he wants, in any circumstances he wants.

This nation can survive a president being disrespected by some nickel-dime congressman from Beaufort; the shame falls onto the shouter and not the one shouted at.

A house divided against itself cannot stand.

I believe this government cannot endure, permanently half smart, and half… stupid.

I fear Section 247 will have to be reitten expressly: so that there will be a mechanism created to establish... Stupid Panels.