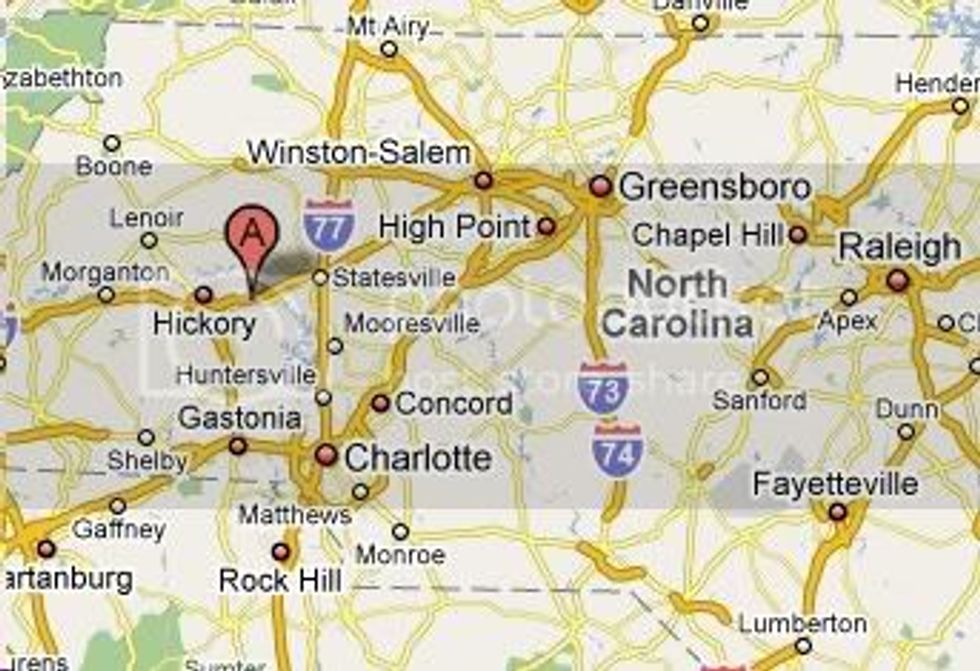 I was watching CNN yesterday AM and saw this pathetic piece about North Carolina Principal Chris Gibbs of Claremont Elementary School. He was forced by winger parents to censor the President's school speech on Tuesday. For point of reference, the school is west of the Triangle, near Hickory. Needless to say, it's Red territory.

In this interview, Gibbs, who is black, knows exactly what the score is -- he's dealing with a bunch of ignorant bigots who think that using the "code" when they really want to drop the N-bomb about the President. He was well aware his head was going to roll if he didn't comply with the bullying extremists who thought the speech contained "communist" rhetoric that they didn't want to expose their precious children to.

Gibbs does his diplomatic best in the heat of this situation, but he calls it like it is:

GARY TUCHMAN, CNN CORRESPONDENT (voice-over): This North Carolina school principal had to decide whether or not to air President Obama's speech for students in his school. The pressure was on.

CHRIS GIBBS, PRINCIPAL, CLAREMONT ELEMENTARY SCHOOL: This may sound a little strange, but after a flurry of phone calls, my first thing was to go in my office, shut my door and have a prayer because I knew I was going to have to make a decision.

TUCHMAN: What was he hearing from parents? Mostly comments like those we heard at the county fair just down the road.

(on camera): Do you think the school should play Barack Obama's speech?

[youtube http://www.youtube.com/v/tP_EyGOfDik&hl=en&fs=1& expand=1]UNIDENTIFIED FEMALE: I think it should be up to the parents' decision if they want their children to hear that or not.

TUCHMAN (voice-over): And that is exactly what Principal Chris Gibbs decided. The speech will not be shown at Claremont Elementary School.

Teachers we met at the school told us they backed the decision.

UNIDENTIFIED FEMALE: It's not something that we want to divide our school with.

TUCHMAN: In our research of the schools and school districts that will not be showing the president's speech live, we found that most of them perhaps not surprisingly are in counties where Barack Obama did not do particularly well during the November elections.

(on camera): Catawba County, the home of the Claremont Elementary School is no exception. John McCain received 67 percent of the vote here.

This is what he's going to say in his speech. If you quit in school, you're not just quitting on yourself, you're quitting on your country. Isn't that a message you want your kids to hear? Isn't that part of what education is all about?

GIBBS: Most definitely. And we've asked our parents, again, going back to responsibility. A responsible parent is going to sit down and talk to their kids about staying in school.

TUCHMAN (voice-over): But Barack Obama's message about it won't even be shown here in an edited form in the days to come. The principal has decided that the children are to see any of it, it should only be from their parents.

(on camera): Let's say if President Obama said I want to come to you school? He calls you up, I want to make a live appearance at your school and we'll have an assembly. You would be dealing with the same things with these parents, wouldn't you?

GIBBS: I would, probably.

TUCHMAN: How does that make you feel?

GIBBS: Well, we have a long way to go (And these synapse-firing-free parents are a prime example of this -- ed.). And the issues out there today are the issues, they're sensitive issues (As in these bigots are thisclose to calling the POTUS an uppity n*gger. -- ed..) But if the president wanted to come to Claremont Elementary School, he would certainly be welcome to come to Claremont Elementary School. And I guess I would have to go back in my office and shut the door and pray again.