It was an amazing evening with many old and new friends at Equality Alabama's Gala Saturday night. The highlight was keynote speaker Rep. John Lewis (D-GA), who is a native of Troy, Alabama. His played a legendary fearless role in the civil rights struggles of the 60s -- and he is man who believes in LGBT civil equality with equal conviction -- he immediately signed on to DOMA repeal legislation.

This is significant in a day when there is a clear dearth of support in the religious black community; Lewis has the moral standing that a homophobe in the pulpit like Bishop Harry Jackson can never touch. John Lewis took batons to the head, was beaten to unconsciousness multiple times for equality -- courage and moral conviction that Jackson and his fellow charlatans of bigotry are bereft of.

Rep. Lewis spoke eloquently about the simplicity of the government staying out of the lives of gay and lesbian couples -- there is no need to "save" marriage from two people who simply want to love one another and be legally affirmed in the same way that heterosexual couples are when they marry.

But perhaps the most powerful message was to those in the LGBT community who are waiting for equality to come to them -- Lewis charged us to seize the moment, do not accept being told to wait your turn, to demand your rights through your representative, and most of all take personal responsibility -- the message we all heard was loud and clear. Too many LGBTs are in the closet waiting for someone else to do the heavy lifting and LEAD. We are all capable of leading by kicking that closet door open. The main meat of the speech begins around 5:00 -- and you will want to hear it all. The man had the audience spellbound.

John Lewis could have let someone else take the baton to the head for his rights. He didn't; his rights were too important to him to NOT lead by example. I asked State Rep. Patricia Todd (the first openly gay state legislator in AL) thought of his wake up call to our community. She agreed that there is no excuse for our so-called leaders, our elected representatives who say they are our allies but lack the political spine to do the right thing should watch this speech as required education. But we also noted to one another that even more critical was Lewis's call to you - those of us who rail about what someone else can do to lead or move the ball forward and don't step up, or take even small steps to be interested in determining the fate of your civil rights. Where is the fire in the belly of the LGBT movement? It's not in DC, it's all of you LGBTs and allies, if you choose to do a tenth, hell, one-hundredth of what John Lewis showed in terms of personal courage to fight for his rights against hostility day and night.

Kate and I spoke briefly to the Congressman to thank him for the inspiring words that energized the room. 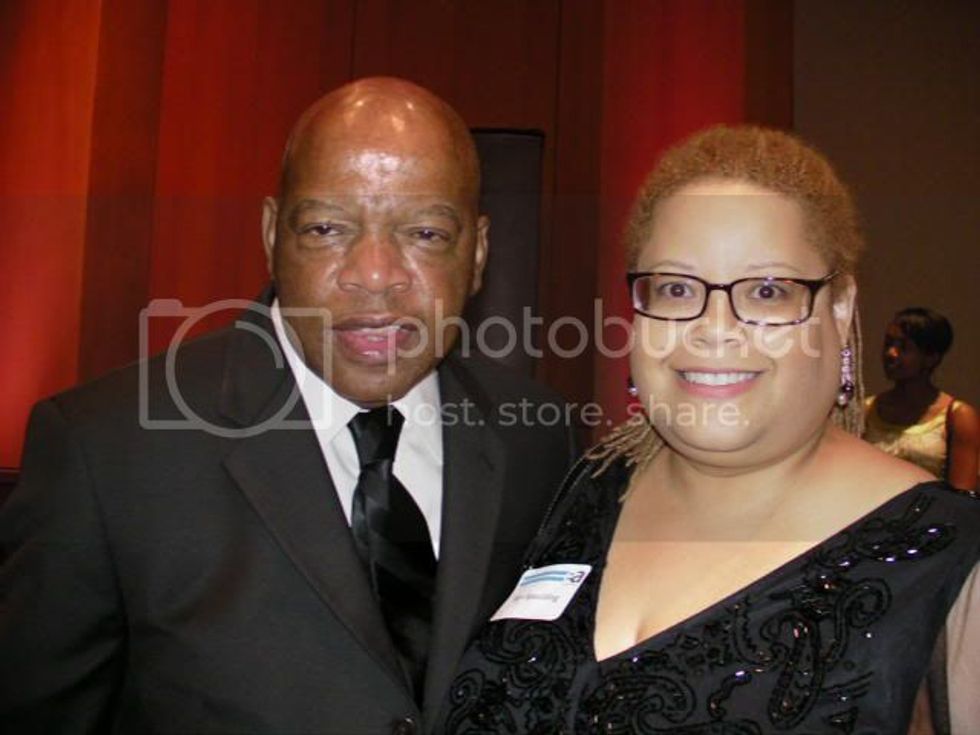 I asked Rep. Lewis what, as an LGBT person of color can do to encourage more of "us" to come out, to address the issues of faith and reconciliation with one's sexual orientation when there is both hostility toward faith in many slices of the out gay community and denial of the impact of the closet in the black community. As I'm about to deliver the keynote address at NC Pride next Saturday, I sought his wisdom about the painful conundrum for out POC who trying to make a difference and are getting blasted on all sides. He said that as he travels to conferences he sees more and more out black and gay representation, steady, but still very slowly. He said that the walls are slowly breaking down among pastors who are seeing the "Don't Ask, Don't Tell" social policy within the community can not hold sway forever. As more than one person mentioned to me today, the same DADT about homosexuality exists not just in the religious black community, but in the Deep South at large.

More below the fold. Blogger, ally and Equality Alabama board member Kathy McMullen of Birmingham Blues and others are just as frustrated as I am over the lack of LGBT community engagement on the political issues that profoundly affect them.

She says when she asks socially out, but professionally closeted people about getting active in the most politically benign way -- showing up at events like the educational sessions at Saturday's conference -- they show interest then balk and bail -- they are being interested in being "political" or an "activist."

I have to tell you -- what is our problem, people? John Lewis wanted his rights badly enough to take personal responsibility to act on it. There are many in the LGBT community -- take the folks in Washington State and Maine right now -- who have their shoulders to the wheel because so much is at stake.

It's pretty clear, however, that if there's not a galvanizing issue of that magnitude, in most places people would rather show up to a rally, party or Pride event than write a letter to a state legislator, knock on a few doors to speak to neighbors about the fact that there are no protections for state employees, or heaven forbid, personally meet with their elected officials (if they even know who they are).

What's wrong with this picture? I am asking this in all seriousness because I truly do not understand the inertia and disinterest in playing a more active role (at any level) for their rights. Is there the fire in the belly? Will the people who attend the National Equality March on October 11 really go home and participate in the more mundane but equally important ways to move equality forward with the same level of enthusiasm that motivates and energizes them to go to DC in the first place?

An aside: the lives LGBT people lead in deep Red and even Purple states are largely ignored by folks in large gay metro areas where rights are often expansive and taken for granted, including civil unions, DPs, etc. These are rights LGBTs in Alabama can only dream about at the present time. During the Equality Alabama Gala on Saturday, several awards were handed out, including a media award, given to WBHM for its radio series "Gay and Straight in Alabama". Accepting the award was producer and reporter Bradley George.

At the links you can both listen to the pieces and read the transcripts.

Hear and read what is happening in flyover country. I also have an interview with Bradley George