Salon used this picture to illustrate the ridiculousness of trying to reach some sort of bipartisan compromise on health care reform. Obviously, that's Olympia Snowe, whose tepid endorsement of the insurance company giveaway called the Baucus bill doesn't even insure a yes vote on the floor when a final bill is hammered out.

It's amazing how bipartisanship became a value the second that Democrats won Congress and the Presidency. It's really a triumph of the right wing noise machine's strategy, based on Calvinball, the game from "Calvin and Hobbes" where you just make up the rules as you go, and not only are they subject to change at any point in time, but they are always changing. Under Bush, bipartisanship was not some higher calling that had to be achieved at all costs. I'm sure the word was used, but it just wasn't a big deal. Now, it's taken as a given that Republicans should basically make all the decisions, even though they lost power. This is presumably because they are whinier. As I was noting to someone in email this morning, conservatives generally have the "got no life" advantage over liberals. To be more exact, what they have is the "got no ideas" advantage. Since their two main ideas are to stop progress and destroy it where they see it, they don't waste a lot of time on stuff like actual work or coming up with ideas. That gives them plenty of time to whine and cry, in hopes that they can get concessions just to shut them up.

But here's the thing: They will never shut up. There are no levels of concessions that will satiate their desire to smash and destroy. Especially not now that they're in full blown violent rhetoric mode, where their first inclination is destruction of any and everything that isn't immediately in line with their smash-and-destroy agenda. For instance, for her extremely tepid vote that won't amount to anything in the long run, Senator Snowe is getting a response that toes the line of death threats while maintaining plausible deniability. 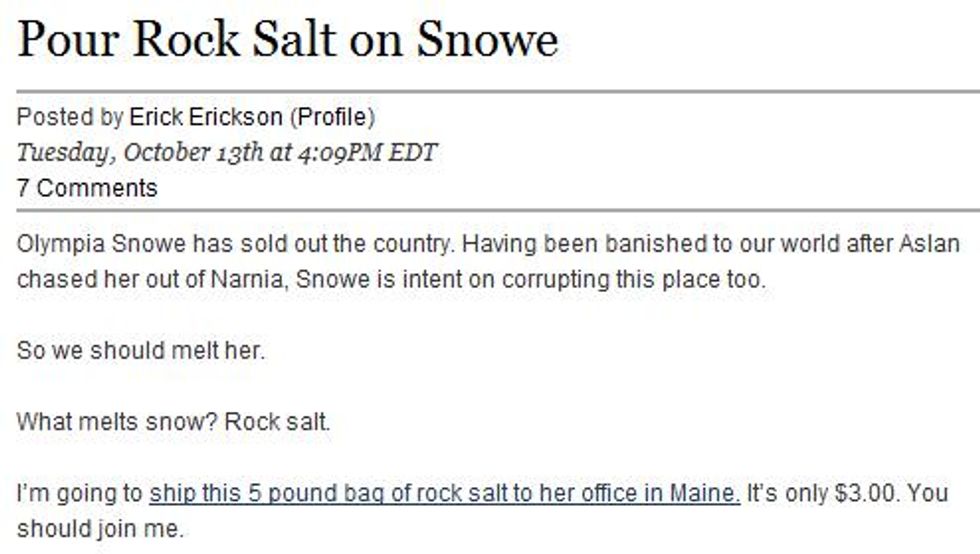 I know their reasoning is that you can't actually kill someone by pouring salt on them, so it's not technically a threat, but the fantasy is obviously one of melting Senator Snowe and eliminating her. As Atrios notes, if they actually do this, they are sending white powder to a hate target for right wingers, in an atmosphere where actual anthrax has been used to try to kill other Senators. So not only is there disturbingly violent undertones to this whole idea, but there's a chance it would be taken as an actual threat and a danger.

Not that I see any evidence that this whole debacle has convinced any of the true believers in bipartisanship away from their faith. The cynical me firmly believes that the Democrats who want to stall, water down, or kill health care reform are only too happy to use bipartisanship as a cover, so they can serve their insurance company masters while maintaining the facade that they wanted to do something about spiraling health care costs.