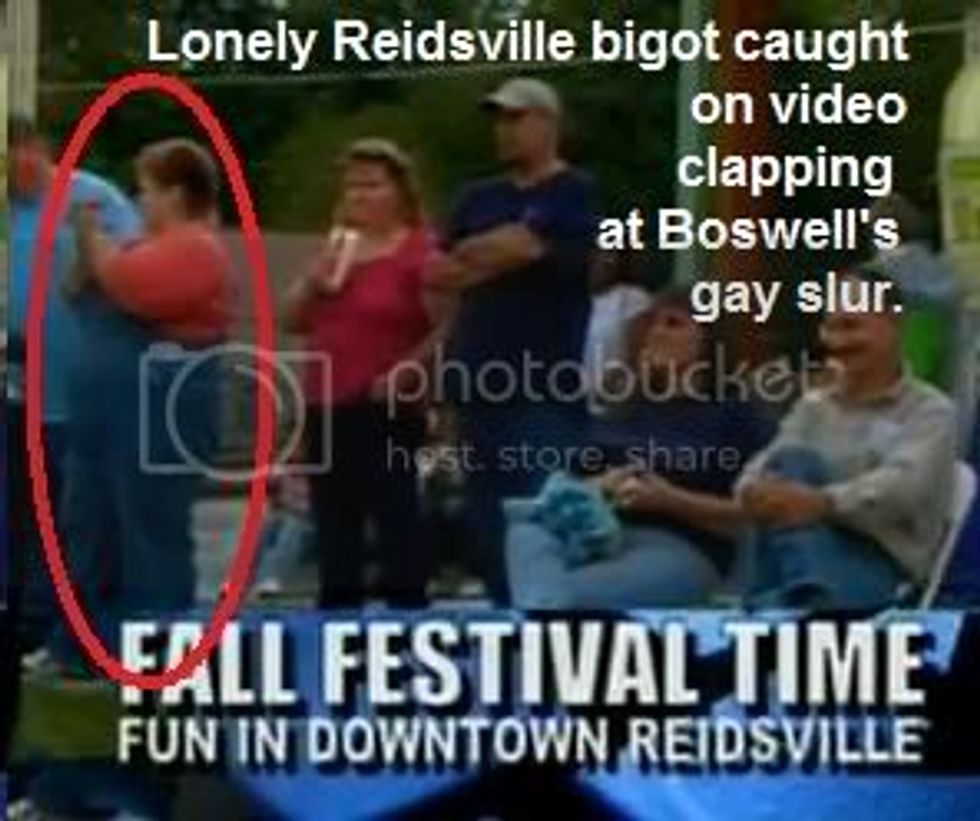 I live in the relatively progressive area of the Triangle in NC, but Reidsville, located north of Greensboro, is no hotbed of LGBT equality. Even so, this small town (less than 15K) had heard enough of Matt Boswell and the Hillbilly Blues Band, who were hired to entertain people at the town's fall festival. The Hillbillies were sorely mistaken about level of Reidsville's homophobic camaraderie during a rendition of Merle Haggard's "Are the Good Times Really Over for Good?" (QNotes):

Boswell sang, “Well you’ll never take my guns, and I’ll pray anywhere that I please./My daddy always told me, if you were able, and didn’t work then you don’t eat./All you Wall Street bankers, as far as I’m concerned, you can all go to Hell./And you can’t get married, you stupid gays and queers, so why don’t you go somewhere else?”

After I posted the above at my pad, it was only a matter of time before someone uploaded the "performance" up onto YouTube.

Here it is, Matt Boswell and the Hillbilly Blues Band in all its glory...to an audience of well, tens (if that, see the photo), who seem to be preoccupied with other things. I only see one woman in overalls clap at the homophobic line added to the Merle Haggard song. Thanks to gaydudenc for loading this one up. His accompanying description:

C'mon in buckaroos and buckarettes! Hitch up your horsie for some down home entertainment...country style!

Look ya'll, this twangy little ditty is the anti-gay song that got country music singer wanna-be, Matt Boswell, 'booted' to the curb by city officials in Reidsville, North Carolina for good. Boswell was performing at the 2009 Downtown Reidsville Fall Festival, and he made up his own lyrics to a famous Merle Haggard song. Boswell decided to spice it up with some of his homegrown, corn-pone lyrics...including, 'And you can't get married, you stupid gays and queers, so why don't you go somewhere else?'

After Reidsville city officials found out about the use of the inflammatory hillbilly lyrics (a viewer complaint was filed with local TV station WGSR 47 in Reidsville which got the 8-ball rolling) - guitar plunking Matt Boswell was permanenty banned from ever performing at city sponsored events. The city manager, Kelly Almond, called Boswell's performance "tasteless" and he would never be booked again at a city sponsored, tax-paid family events.

Shoo-wee, Pappy! Break out your overalls, cowboy hats, Skoal, Tony Lama boots..and sit a spell! Take a load off while you cry in your beer. And stop kicking that coon-dog!

By the way, my little corn fritters, the offensive lyrics begin at around the 3:12 mark...if you can take it that long. Lots of alcohol would help. Oh, and watch the faces of the crowd as they're riveted to Boswell's performance. Okay, maybe not riveted. They were probably thinking that lots and lots of alcohol would be good right about then. 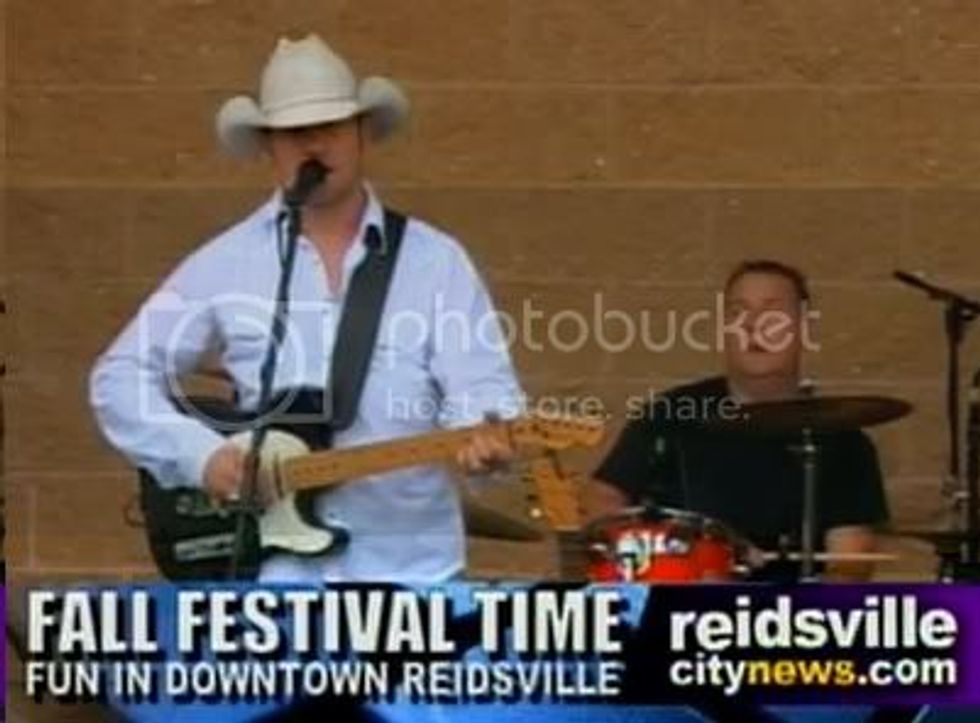 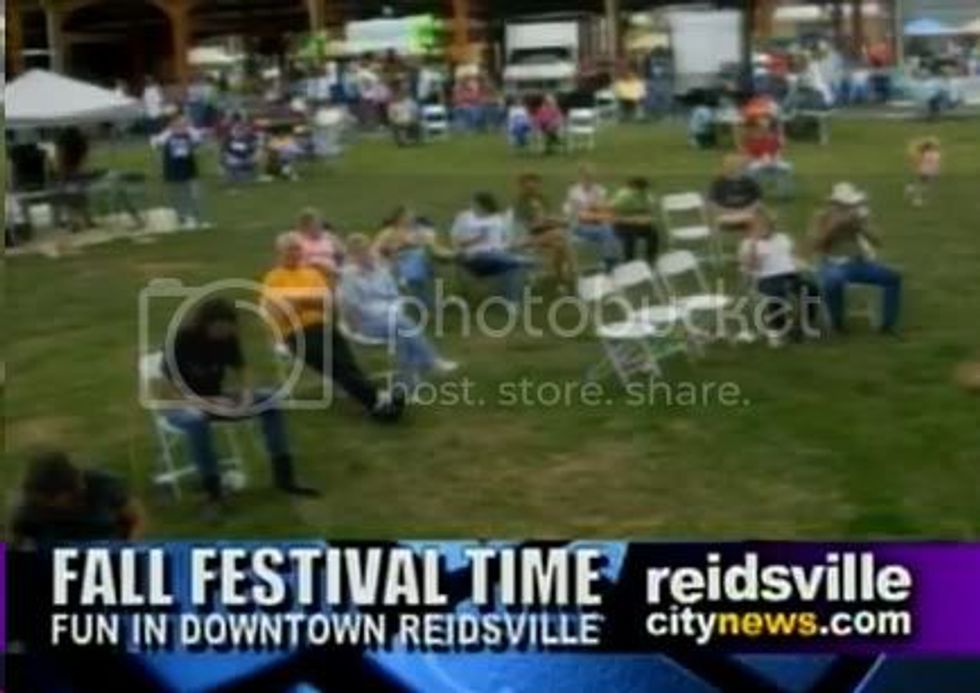 Almond also said the employees in charge of booking public events have been “instructed not to book [Boswell] again,” with similar thoughts echoed in an email to WGSR 47: “I can assure everyone involved that, if this language was used, this person, or anyone representing him, will not play another city event. Market Square, and indeed all city venues, are places meant to bring people together, not divide them. We certainly support tasteful, patriotic acts. We also have to respect everyone’s Free Speech rights. However, we don’t have to pay for it or include it in a city sponsored event, and we will not."

You see, Boswell, just because Reidsville hasn't progressed enough to include sexual orientation or gender-identity in its non-discrimination policy for city employees yet doesn't mean you have a venue to foment hate. You're now banned from performing in that small NC town.