On Obama's HRC keynote -- plus watching the LGBT movement in flux 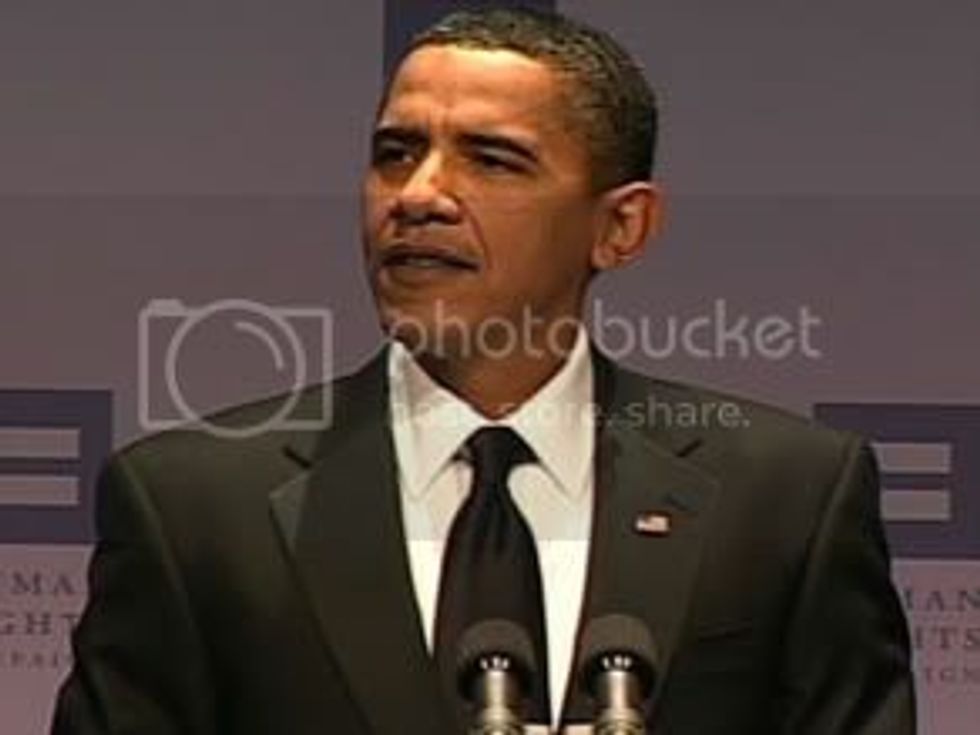 I was live on-the-air for SiriusOutQ's coverage of the HRC Dinner featuring the President's historic keynote address Saturday night, and I have to tell you, the low expectations I had regarding LGBT policy were unfortunately met on that account. If you're an activist or citizen looking for timelines, actions, use of the bully pulpit, ANYTHING that would indicate to the community that our President was serious about moving on the laundry list of LGBT issues any time soon, you would call it a fail.

However, I have to agree with Sean Bugg, my fellow commentator during the coverage, who made a great point that if you aren't a wonk or activist clued in to the messy politics going on behind the scenes, this speech is a huge home run of support from the President of the United States to a kid out in the sticks who watches it can now feel he is part of the American fabric. In our cynical view of the political system, jaded by the hypocrisy and spinning we see each day, as well as outright lying by pols and advocates, you have to remember how this speech can resonate with non-political LGBTs and straight America. The President actually engaged with a segment of our community in his first term to affirm support for the LGBT community. I doubt you'll see him endure sane, rational criticism from the right on this other than the usual whines from the fringes who already think he's Satan/Hitler/Muslim terrorist, etc. That's progress on its own and it should not be minimized.

So that's my praise. As far as criticism, I don't even know where to begin. But I'll first share the news that HRC is happy with the speech.

"Tonight, President Obama told LGBT Americans that his commitment to ending discrimination in the military, in the workplace and for loving couples and their families is 'unwavering.' He made it crystal clear that he is our strongest ally in this fight, that he understands and, in fact, encourages our activism and our voice even when we’re impatient with the pace of change. But these remarks weren’t just for us, they were directed to all Americans who share his dream and ours of a country where “no one is denied their basic rights, in which all of us are free to live and love as we see fit.”

"This was a historic night when we felt the full embrace and commitment of the President of the United States. It’s simply unprecedented."

OK. What he said about DADT is no different than the message we've heard every time the admin is asked about this. Robert Gibbs winds the key in his back and belches that out regularly during press briefings. No news. DADT repeal is the big "gimme" that he could most easily accomplish -- all the polling support is there, there's bipartisan support on the Hill, and the face of the opposition is Elaine Donnelly, for god's sake? Many service members are already serving openly with their COs looking the other way. How many homophobic retired generals need to go to the hereafter before Nancy, Harry and Barry open the locked chest to find their dusty spines? I wasn't surprised that the response of Aubrey Sarvis, executive director, Servicemembers Legal Defense Network was diplomaticly muted.

"We were heartened to hear the President say, 'I will end don't ask, don't tell.' But an opportunity was missed tonight. SLDN was disappointed the President did not lay out a timeline and specifics for repeal.The 65,000 gay and lesbian service members--who put their lives on the line and who remain impatient with the pace of progress--deserve to know when their commander in chief and Congress plan on getting rid of this law."

The President mentioned our relationships, but gave no timeline other than "You will see a time." Well crap, I can say that and be as precise as the President. Honestly marriage equality won't happen any time soon and isn't a priority - what about ENDA, which would free LGBTs from the shackles of silence of fear of losing employment. Does the President say he will use the bully pulpit to pressure Congress to act with deliberate speed. Nope.

This was a well-crafted, oddly familiar address if you're a political junkie, because it felt like a stump speech, a post-election speech and a WH LGBT photo op address patched together. I understand his support for equality; what I didn't hear is that civil rights of human beings are any more important than any other political issue he faces. That correcting a grievous wrong affecting the lives of American taxpayers he wants support from on other issues is ok to shuffle down in the pile of issues. Honestly, it's good to know where you stand -- statements of support without any timelines at this stage in the game is frustrating and very informative. But it doesn't mean we won't continue to press for them, no matter what Barney says.

And, did you notice the "T" invisibility in this address? No shock there either; I think this may be another education issue. I have to say the money quote from the speech that made me laugh out loud was the President running down a string of accomplishments and one he referred to was how he invited the homos to the Easter Egg Roll. Yep I can take that to the bank here in NC and do something with that bit of equality. BTW, the Bushes had gay families participate in those festivities as well, the first time they just didn't want them photographed with Laura. The second time seemed to be pretty irrelevant. Oy. Funny and sad, but it's progress, right.

Ironically, I give President Obama points for having the cojones to state that we are impatient -- and should be. He's man enough to say to continue the pressure, whereas the messages delivered by Joe Solmonese and Barney Frank in the past few days have been protective of the President and scolding of the grassroots and the LGBT Netroots. It's quite a stark disconnect that says more about our professional advocates than it does about the President.

An aside -- I think the major schism between our orgs and the grassroots and Netroots has reached a perfect storm with this weekend. The juxtaposition of this dinner, where we see a different view of progress, as ovation after ovation for the President suggested full support of the Patience Agenda, versus the people attending the march. Many of those marching on Sunday don't have the access to power or fat wallets to be considered for courtship by the Obama's 2012 team and the Dem party. The divide is even more stark when you consider the traditional political infrastructure and the blogosphere, which Twitters, Facebooks and blogs the inconsistencies, spinning and attempts to close ranks around, for example, HRC and the White House. The fallout over the last few days is more evidence that the rules have changed, the game has changed, and the flailing shows the man behind the rainbow curtain. As I said, it's a perfect storm that no one could have predicted on any side of the matter. What does it mean? I don't know, but we cannot ignore the fact that these shifts in power, communication and messaging is muddier than ever. That's not advocating anything one way or another, just an acknowledgment that smart minds need to reassess how we as a movement really put our best foot forward and think less about preserving power, position and influence into silos.

There are two realities, the Beltway reality, a myopic view that is so disconnected from the lives of everyday LGBTs (particularly Ts) that has us setting such low expectations. The reality outside the Beltway doesn't exist, the focus is on cultivating the relationships with power brokers with the secondary focus on obtaining "what's possible" politically, which of course is pretty subjective and dependent on whether there is professional peril in rocking any boats.

The reality outside the Beltway is often too impatient about the logistics of moving legislation in many respects, but the impatience is borne of the peril of losing a job, losing custody of children, or myriad other problems that will not be solved in their Red state any time soon. To see such inaction and promises and action delayed or deferred is disheartening -- and very personal. For activists in this sphere, a speech like this is a reality check of its own -- beautiful, empty prose telling us we are on our own for who knows how long. 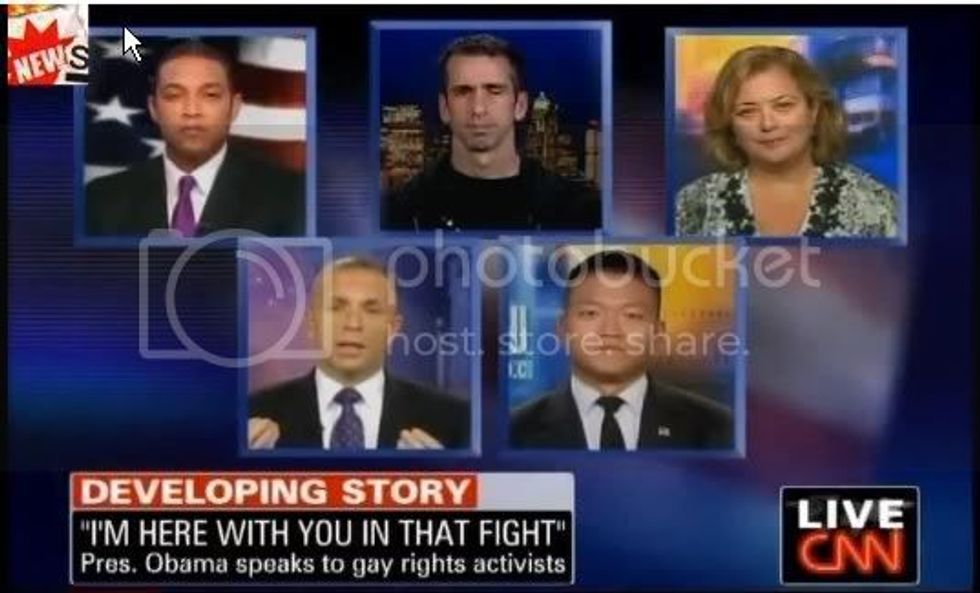 They really got into it last night, with DADT-discharged Lt. Dan Choi serving as the diplomatic optimist, CNN commentator Hilary Rosen as the pragmatic defender of The Patience Agenda, and SiriusOutQ host Michelangelo Signorile and author/blogger Dan Savage as the critical activists. It's a must-see.