Sorry, you can't bully me into joining up with this insanity 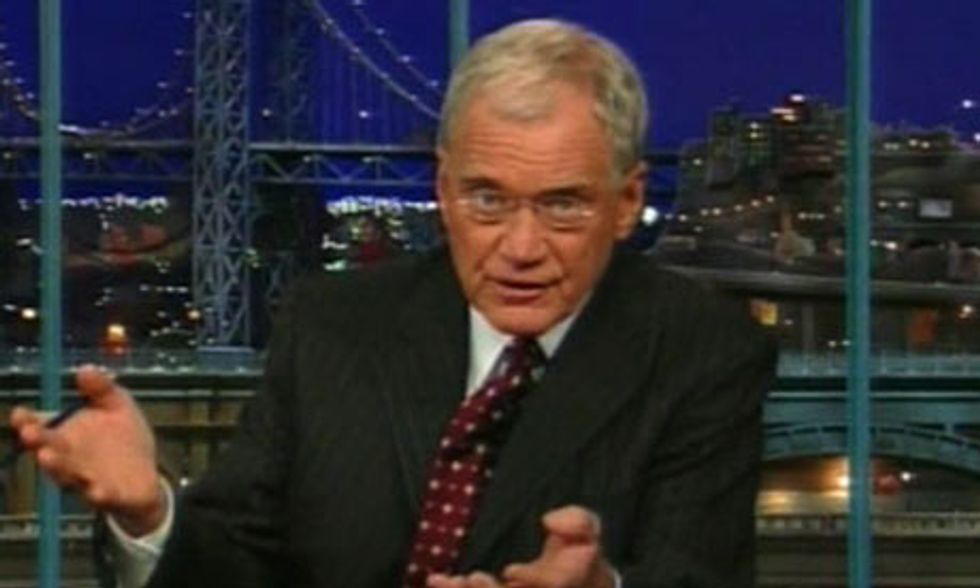 The second that Jesse told me that conservative pundits and bloggers were getting wrapped up in a faux outrage over David Letterman's infidelities, I knew that the next step was accusing feminists of hypocrisy because we're not going to get outraged, and they've determined that feminists should. Because any time unauthorized sexual behavior that was mutually pleasurable happens and a woman's feelings get hurt, feminists are supposed to be outraged. Conservatives have not and will not get that adultery falls out of feminist outrage jurisdiction, even though it fits their vague idea of what we're about, some combination of curtailing male behavior and treating women like perpetual victims.

Feministing and Broadsheet have covered the outrage, pointing out that the pearl clutchers undermine their own case by calling Letterman's wife ugly, and equating this with the Polanski case. Which answers the question plaintively asked by a disingenuous wingnut in the comments here: Where did you get the idea conservatives don't care about rape? Well, that answers your question. The second you equate Letterman's deal with Polanski's, you've basically admitted that you're only interested in getting outraged if a celebrity you don't like has unauthorized sex. Issues of consent don't ever seem to quite crack through the thick right wing skulls.

Here's the thing: Wingnuts don't care about what Letterman did, not one bit. This is and always has been about scoring points against the other "team", and even though Letterman is an entertainer and not a politician, they're out to get him. He's a target for two reasons. One, he makes fun of politicians they like, and he took a cheap shot at Our Lady Of Teenage Pregnancy, Bristol Palin. (Their weak excuse was that he made the joke about a younger Palin daughter, but we all know that was a mistake, and wingnuts are being disingenuous. His joke writers probably didn't see the footage, and assumed that "daughter" meant 18-year-old Bristol, who has a public career as an abstinence-only activist and is fair game.) The other reason is that they enjoy destroying people's careers. Letterman is Van Jones, ACORN, Yosi Sergeant, and now they're targeting Kevin Jennings on the grounds that he's gay. They enjoy collecting scalps when they're in power, as I learned personally, but their blood lust gets out of control when they're out of power, and right now they're demanding 2-3 sacrifices of someone's career and dignity a week.

Sadly, this is why their help on the Polanski thing was not needed. See, he actually did something immoral, but they apparently see him as just another person to ruin so they can feel powerful.

Do I think it's delightful when older men with power turn full creep and start sleeping with much-younger women, often women who work for them? Of course not. It's a common abuse of male privilege, and I really resent some older men who act like it's older women's duty to have sex with aging men, but that they can actually act like they're being deprived if they don't get the young stuff. Shit like this makes me want everyone who writes it to put up bad pictures of themselves as the price of admission, so we can make fun of them for even thinking they can pass judgment. But it's not something to fire someone over, and Letterman's offense was mild compared to that of many older men with power. The young woman that this is all over appears to have been in her late 20s when the affair went on, which I put firmly in the category "old enough to know better". If he was going after a college intern, a la Bill Clinton, then it would be a lot easier for me to be angry about the ethical lapse. Conservatives demanding feminist outrage over an affair between an older man and a woman in her late 20s are falling into the trap of assuming feminists think all women are vulnerable, stupid, and easily exploited. In reality, feminists argue that women are equal in intelligence to men, and shouldn't be treated patronizingly.

I was invited on Overthinking It to talk about the Polanski business, and it drifted to Letterman---with full and explicitly stated understanding that the two can't even be considered the same kind of scandal, since it's not about the sex but the consent----and I spelled out my further reasons that I find the outrage over Letterman to be ridiculous. Standards on colleague sexual relationships vary from workplace to workplace, from industry to industry, but the entertainment industry notoriously has some of the most free-wheeling attitudes about it. Some of it it overtly coercive, such as the casting couch. But it's also true that a lot of younger women freely and fully enter into these relationships with powerful older men because a) they want to and b) they want that leg up. Entertainment is a cutthroat business, because you're competing against staggering numbers of people that are equal to you in merit, and so who gets what promotion is almost always going to be based on who you know, and how well you know them. Sex partners and family members of the powerful have a lot of advantages, and I can't blame someone who creates those intimate relationships in order to get a leg up. It's weird to wring our hands over someone whose extra-marital dalliance gets them power, while looking away at people who get it because they were born into it (Gwyneth Paltrow, Drew Barrymore, Ben Stiller, you name it) or married into it (the legions of powerful L.A. wives---Laurie David being an obvious example). It's entirely possible, and likely even, that a lot of these relationships are completely above board, with expectations about the casual nature of the sex and the payment in favors explicitly stated. I'm not in love with the perpetuating of the idea that sex is something women do for men in exchange for payment, but if everyone is getting what they want out of the situation, then it's not really my concern.

Intimations of sexual harassment bother me, because it just reinforces the incorrect idea that the bad part of sexual harassment is the sex part, whereas I'm more concerned about the harassment part. The obsession with policing people's actual sex lives distracts from the fact that most sexual harassment has nothing to do with actually having sex with someone. Most of it is about demeaning women in the workplace for being women, constantly reminding them that in their male colleague's eyes, they're just a hole for fucking, not a real person. Most sexual harassment resembles cat calling, and it's about making women feel unsafe and diminished.

One aspect of the story that should give wingnuts pause is that the instigator of all this---Robert Halderman---has all the red flags of someone going full blown "men's rights activist". MRAs and a lot of male anti-choice nuts tend to be men who completely lose their shit after a divorce or some other rejection by a woman they thought of as belonging to them, and they lash out, trying to punish the growing pantheon of foes they blame for their troubles. Your garden variety angry white men lash out at feminists, women who have infertile sex (which is why abortion clinic protesters are thick with resentful men), and eventually anyone seen as being too helpful to women, including social welfare programs and prosecutors who take rape seriously as a crime. Halderman seems to have targeted Letterman instead. Wingnuts who join up with him are just exposing the conservative movement's M.O. of exploiting personal resentments like Halderman's and making them political.