The 2008 campaign was great for armchair psychologists as we saw a good slice of color-aroused America that had been hiding its true feelings about the prospect of the country being led by a man of color.

Is it me, or have the out-and-proud racist bigot stories have continued in a steady flow post-Inauguration as well? With Barack Obama now resideng at 1600 Pennsylvania Avenue, these same people have now created a rag-tag bunch of overlapping groups clearly untethered from reality and fact-based discourse -- teabaggers, birthers, death panel wailers, flat-earthers, womb controllers, eliminationists, etc. 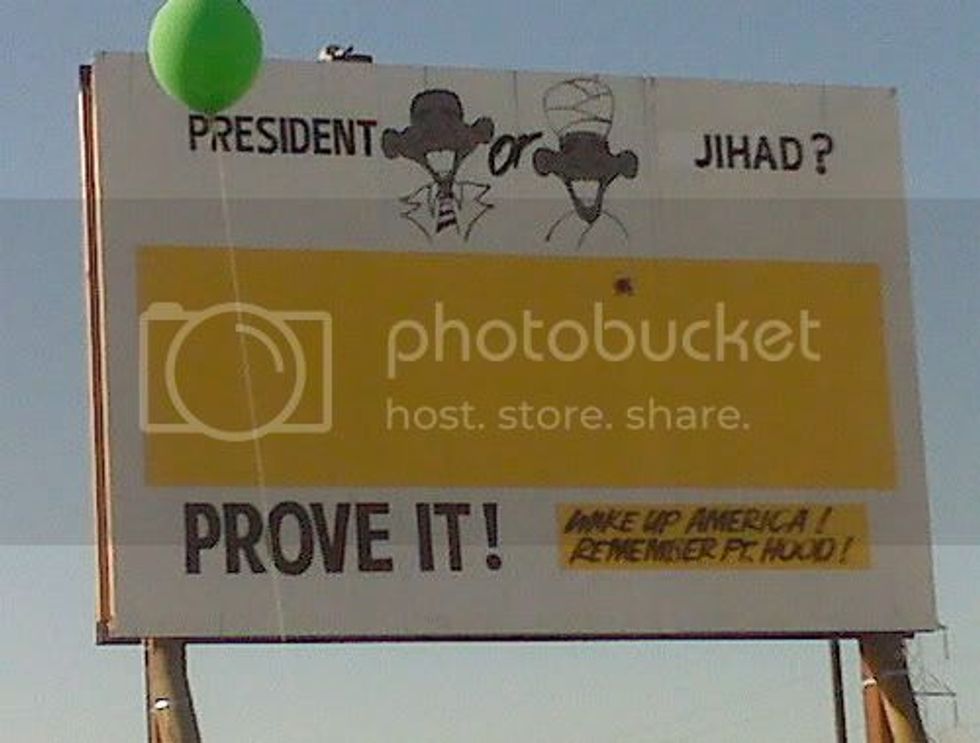 A car dealer in Colorado decided to let his inner bigot birther hang out for all to see on the sign at right. It shows a taste-free caricature of the President (two, actually), one with a turban on, and "President...or...Jihad?" with the bottom text reading "PROVE IT" and "Wake up America! Remember Ft. Hood!"

In another photo of this sign the yellow box said "Birth Certificate" on it, along with the phone number of the dealership. in the white space along the bottom of the sign.

WTF is this clown saying -- that the Obama is a Jihadist? That the suspect in the Ft. Hood shootings took orders from the President to blow away those people on base? Actually, what's amusingly sad is the headline about this on Denver's Westword news blog - "Is this anti-Obama billboard racist? You be the judge."

Is this billboard, on display outside Wolf Interstate Leasing & Sales, 4855 Miller Street in Wheat Ridge, a bold (and legitimate) statement of displeasure with the Obama administration that has the guts to link the shootings in Fort Hood, Texas, with Islamoterrorism? Or is it an offensive throwback to the Little Black Sambo imagery that typified race baiting for far too much of the 20th century?

Is there an argument to be made that it isn't racist and Islamophobic? One commenter: "the cartoon of President Obama is just missing either 1) a watermelon or 2) a banjo." Anyway, the man responsible for this intellectual bit of First Amendment prowess is... 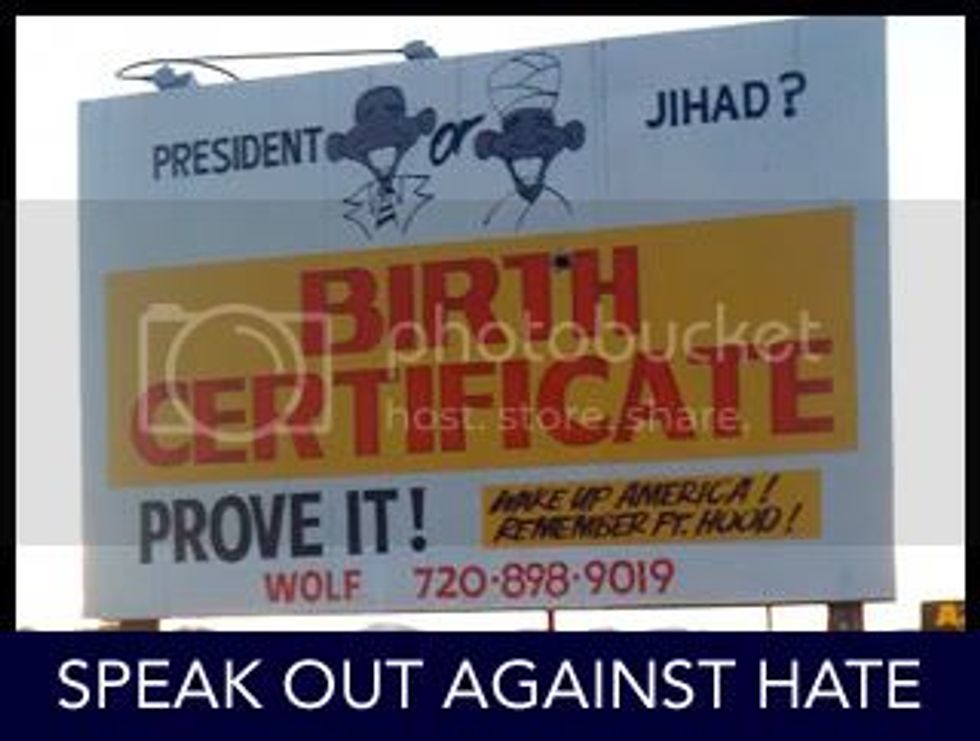 The general manager of the dealership says the man behind the message is Phil Wolf, who supplied billboard space for "Where's the Birth Certificate?" signage on I-70 backed by KHOW's Peter Boyles.

I have to go with this commenter's sentiment:

Truly another example of the militantly stupid. This stupidity can be devastating since it distracts us and makes room for other even more moronic presentations of stupidity. All the while these morons think that they are being put upon.

These simply don't know what to do with their anger and resentment regarding the perceived loss of political, economic and cultural power and control to the melanin-enhanced portion of society. As I said, perceived -- these are the people riled up by the likes of Limbaugh, Hannity and Beck -- too ignorant and scared to think for themselves enough to see that the current leadership of the Republican party has no real interest in the welfare of these people. They had eight years of Bush and what do they have to show for it? No matter, the sheeple are dazed, confused and just finding out their savior Sarah Palin isn't all smiles, winks, and just like them.

ProgressNow Colorado has called for a boycott of Wolf Automotive Group:

The "tea party" movement and the "birthers" are becoming more and more outrageous. They're in the thrall of demagogues like Glenn Beck, Rush Limbaugh, Peter Boyles, Sarah Palin, and conservative elected officials in Colorado like Senator Dave Schultheis--who sent out a statement last week comparing President Obama to the 9/11 terrorists who flew United Flight 93 into the ground.

We'll defend anyone's First Amendment right to speak their mind. However, the "marketplace of ideas" that the First Amendment protects only works when everyone speaks out. If hate like that spread by Dave Schultheis and the owners of Wolf Automotive is allowed to go without a response, then we allow the perception that these ideas have merit.