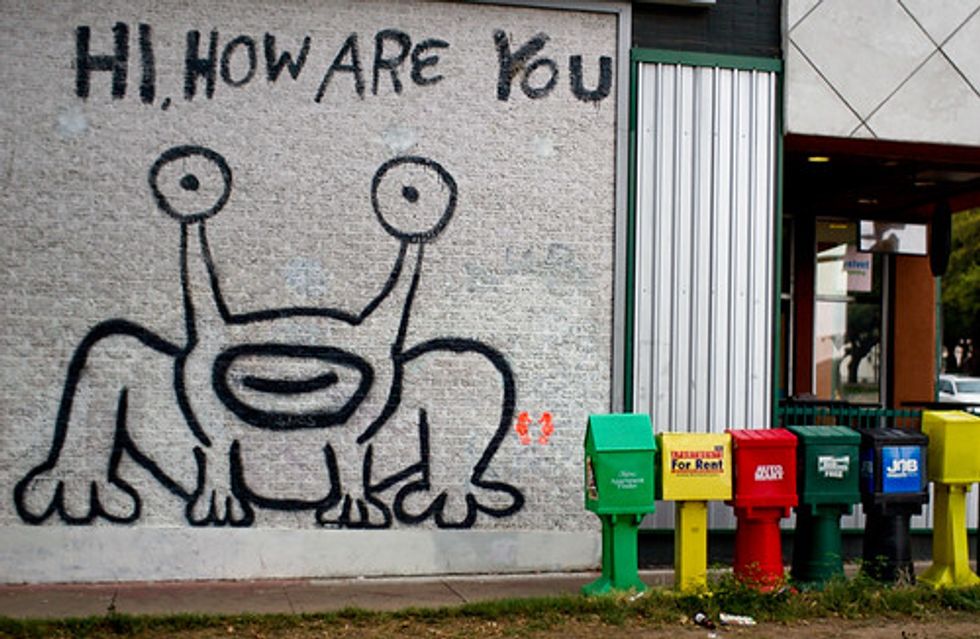 Sorry I didn't do a Friday Genius Ten yesterday; the holiday got my internal schedule off. That, and packing. We're leaving town early next week, so blogging will be spotty for awhile, until my work station is all set up in Brooklyn.

I've never had to do this before---move from a place I love to a place I love---and it's bittersweet, to say the least. I've lived in Austin since August of 1995, when I moved here to go to school and promptly refused to leave. I went to Virginia for two months during the year 2000 (following a boy, naturally), and Austin rolled me right back up. Basically, I've never really lived out of Texas. Two months in Virginia doesn't count, and two months in Denver in high school was like summer camp. I feel ready to leave at the ripe old age of 32 and eager for this adventure. But a girl gets sentimental about her home. I've probably seen a thousand plus bands play here. I've roamed around its streets at ungodly hours, laughing it up with friends. I've been my happiest here, but I've also had my sad times. Friends and men have come and gone (well some didn't go), but the breakfast taco has always been here for me.

A friend of mine and I went to lunch, and she said to me that it was probably a good time to go, because (say it with me now, Austinites), the city is changing so much. The skyscrapers. The overserious yuppies clogging up the bike lanes with their spandexed asses in the air, worshiping Lance Armstrong. The fact that you really can't walk down the street smoking a joint anymore. (This pains the slacker stoners more than it does me, I'm afraid.) Sound Exchange is long dead. 33 degrees is gone, too. There's an Urban Outfitters on the Drag. There's a Beauty Bar downtown. The exploding population. The monstrosity of a Whole Foods on 6th and Lamar. Did I mention the condos? Condos condos condos.

In a way, it's hard not to see the point of a complaint that has also been in the air as long as Austin's been cool. Take that piece of graffiti in the picture above. That's been on the Drag since Daniel Johnston painted it on the side of the record store Sound Exchange a gazillion years ago. (Or 1993, according to Wikipedia.) Fans were able to get it preserved, even though Sound Exchange went under and has been a couple of restaurants since. The image, which is undeniably a joyful one, has since popped up on a million T-shirts. I'm considering buying one myself before I leave town. But it's weird to see it pop up on the chests of dumb fuck teenagers who have no idea who the artist is, but just bought it because it's famous graffiti. The image belies the sadness of most of Johnston's music. (Lyric from a favorite song of mine: "I sold my freedom for free room and board/like a monkey in a zoo".) Seeing it in a misunderstanding context is irritating; and that's when the ustabe complaints about Austin changing really have power.

But I embrace change, at the end of the day. A lot of stuff people find irritating, I'm over. I think more housing downtown is a good idea---I just wish it were cheaper. The mainstay clubs keep on keeping on, but the new ones popping up on the east side of the freeway are also fucking awesome. We don't have 33 Degrees, but we do have End of an Ear, which is a much better record store anyway. (If further from my house, dammit.) The quality of indie rock in this town has gone up since the early 90s, and the bigger SXSW is just as fun as the old one, even if it pains me to admit it, since it's "gone corporate". But has it? At the end of the day, they still have the shows in clubs around town, and since they control the space, it feels the same as it used to be, just with more and better music. And new institutions crop up all the time. Alamo Drafthouse, anyone? The Austin I live in now has more going on than when I moved here, full stop. Change is inevitable, and it's not always in the wrong direction.

Which is why, even though I'm going to miss Austin, I'm really excited about moving to New York. Because change, while it gives us pains, is something to embrace and not dread. In 14 years, I can say I've done Austin. I've lived in nearly every neighborhood worth exploring, and had more crazy adventures than I even care to admit. It's time. But like Dolly Parton said, I will always love you.

So, the last Genius ten in Austin will be based on a song by that iconic artist Daniel Johnston.

6) "Too Drunk To Dream"---Magnetic Fields

Videos below the fold. Sorry about no cat pics---packing is making keeping up with that hard, plus they spend all their time hiding in boxes lately. [youtube http://www.youtube.com/v/iTdPn60lcB0&hl=en_US&fs=1& expand=1]