This story is so weird; it exemplifies the paranoia over at the White House over anything G-A-Y, particularly regarding the President's current illogical-but-politically safe position on marriage equality. We have to roll the story out before getting to the meat of it. 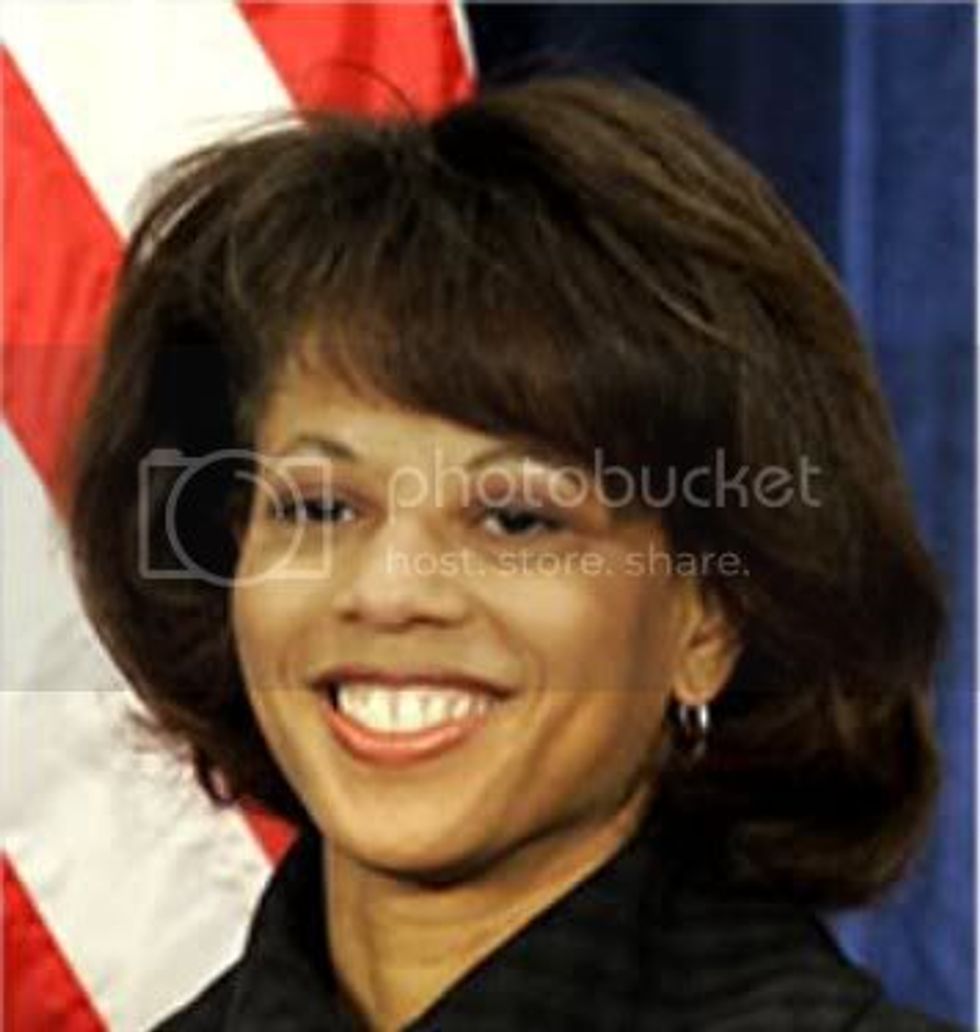 Melody Barnes, Obama's senior domestic policy aide, recently gave a talk at Boston College; she indicated not only her personal opinion on marriage equality (she's for it), she provided insight on WH policy. Apparently her answer was not from the script and the White House freaked and denied Barnes said anything about her views.

Reached late Monday evening, a White House official who spoke on condition of anonymity said that Barnes was not discussing "her personal views on marriage equality or other issues."

Paul Sousa, Founder of Equal Rep was at the talk and told Sam Stein of Huff Post that Barnes indeed shared her viewpoint on marriage equality. So that meant someone wasn't telling the truth.

But the Barnes talk had been taped. What happened next was extremely bizarre -- persons unidentified in Obama White House, home of our "fierce advocate" -- told Boston College that it had final say on whether this tape would be released at all. John @ Americablog:

by 3:40PM Tuesday, November 10, the White House was given a copy of the video by BC, and was informed that the school's policy was to give the speaker the choice to release or suppress video of their talks at the school. The White House, rather than refusing to be the ultimate censor of the publication of the video that had already caused quite a stir, and rather than simply giving BC the permission to publish the video on the spot, accepted the video, and its role as censor, and didn't get back to the school for two whole days. It was only this morning that Kenyon says the White House told Boston College that it could release the Barnes video.

Why did it take the White House two days to decide whether it would permit a private university to release a video of a public event involving a senior White House official, a video that we now know the White House had in its possession the entire time?

...The appropriate response from the White House, when a private university asks for permission to release a video of a White House employee speaking on the record at a public meeting, is not "send us the video, so we can see it, and decide if we're going to censor its release. And in the meantime, do censor it for at least a few days." (Which leads to some fascinating First Amendment issues, at the very least.)

The Obama White House was trapped in yet another public "gaffe" over its preposterous dealings re: LGBT rights because of Melody Barnes's statement. Since it couldn't give a rational explanation for withholding the tape's release, the anonymous paranoid Obama officials decided they would hold on to it until the news "dead drop" on Friday, when the MSM goes to sleep for the weekend. Unfortunately, the Internet never sleeps, peeps.

The Advocate obtained the tape from the college’s communications department and transcribed it, so there wasn't any question about what Barnes told the students at Boston College. More below the fold.

Boston College law student Paul Sousa posed the question to her in the context of Obama's current view that "separate but equal" is A-OK.

“What I would like to know is whether or not you support equal civil marriage rights for gay and lesbian Americans, and if so, are you speaking or will you speak with President Obama on this civil rights matter?”

A clear question, no? And Barnes, in turn, is clear as well in her response:

“I appreciate your question, and I also belong to United Church of Christ. And I guess I would respond in a couple of different ways. One, I appreciate, I really appreciate your frustration and your disappointment with the president’s position on this issue. He has taken a position, and at the same time, he has also articulated the number of ways that he wants to try and move the ball forward for gay, lesbian and transgendered Americans, including signing the repeal of the Defense of Marriage Act, and a whole host of other things that we’ve started to do to model as a leader in terms of what the federal government is doing, as well as to encourage changes both in the military, in the workplace, and certainly with regard to hate crimes. I accept that that is very different than what you are talking about. And what you’re talking about is something that is quite fundamental.

“With regard to my own views, those are my own views. And I come to my experience based on what I’ve learned, based on the relationships that I’ve had with friends and their relationships that I respect, the children that they are raising, and that is something that I support. But at the same time, when I walk into the White House, though I work to put all arguments in front of the president, as you say, I also work for the president. And we have very robust policy conversations, very robust constitutional conversations with the White House counsel, and others about these issues, and we’ll see what happens from there. At this point, all I can say to you is that his plans right now are to move the ball forward in the ways that I’ve described. He hasn’t articulated a shift in his position there, and that is something that at this moment I accept as it being, it is what it is, even as we continue to have a national, or we continue to have a conversation with him about it.”

So reading the above, she supports and sympathizes with lesbian and gay families and the quandry they are in; and indicates that she, along with other marriage equality supporters want to continue the dialog to move the President back to the unequivocal position he used to hold back in 1996: "I favor legalizing same-sex marriages,and would fight efforts to prohibit such marriages.”

The whole thing would be laughable if it didn't convey how paranoid this White house is about LGBT civil rights; taking days to review a tape as if there were some top-secret national security matter divulged in it. The statement Melody Barnes made could have been reviewed in a couple of minutes and cleared for OK. You've read the transcript; what on earth were they so worked up over? She stated that she will support the President's views in her professional role; she simply her personal views in that context.

People do this all the time; you can disagree with your boss on a matter and still enforce/support the company's policies, while personally making efforts to convince your boss that another path may be more beneficial.

Whoever you are in the White House -- engineering this fracas has only strengthened the reasons for shutting down the gAyTM. Paul Sousa:

It's disappointing and angering that the White House felt the need to lie about one of their top officials supporting marriage equality -- that just reinforces the beliefs that members of our community have regarding the attitudes of this White House towards the LGBT community. There is no shame in supporting full equality for gay and lesbian Americans and the White House should be proud of the courage that Melody Barnes has displayed.