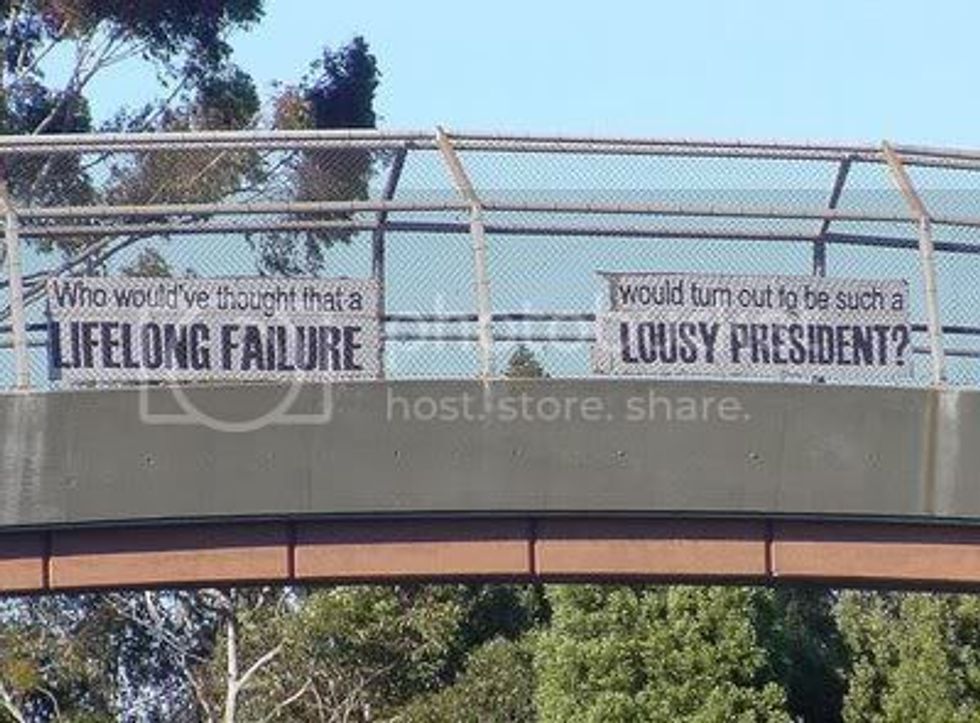 Are we supposed to feel better that the figure isn't any higher? (Think Progress):

Asked what they thought had the greatest negative impact on America this past decade, 38% cited the 9/11 terrorist attacks, 23% picked the mortgage and housing crisis, 20% said the Iraq war, 11% chose the stock market crash, and 6% said Hurricane Katrina.

This also bears out looking at Census figures - this can't help the ego of the man from Crawford. Aw, crap, he probably doesn't give a damn.

While Bush was in office, the median household income declined, poverty increased, childhood poverty increased even more, and the number of Americans without health insurance spiked. By contrast, the country’s condition improved on each of those measures during Bill Clinton’s two terms, often substantially.

The best part of all of this is the most predictable -- Bush cronies are desperate to rewrite history to blame Obama. After all, what on earth can they put in the W library about his Presidency that doesn't smell of sucktitude?

Former White House adviser Karl Rove, for example, has been all over the media, issuing statements like the Bush administration has “no” responsibility for current budget deficits. Bush officials have even tried to claim that they made Afghanistan a top priority and that Obama is the one who has been screwing up their work. Fox News host Sean Hannity has gone so far as to say that Bush deserved the Nobel Peace Prize, and Sen. Orrin Hatch (R-UT) is claiming that the cure to the country’s problems is to just give political control back to Republicans (which was true for a large part of the last decade).

I know the general American public -- you know, the ones who tune out politics until they have to vote (for the ones who do vote at all) -- is seen as sheep by these neo-cons, teabaggers, birthers and media turd purveyors, but one can only hope they aren't going to buy this pantload.

Memories...
* Condi prediction: history will vindicate Bush admin
* Bush to the families of dead soldiers: 'So what?'
* Bush - 'I wasn't a knee-walking drunk'
* Dear Leader: 'I don't remember what I was doing in 1981'