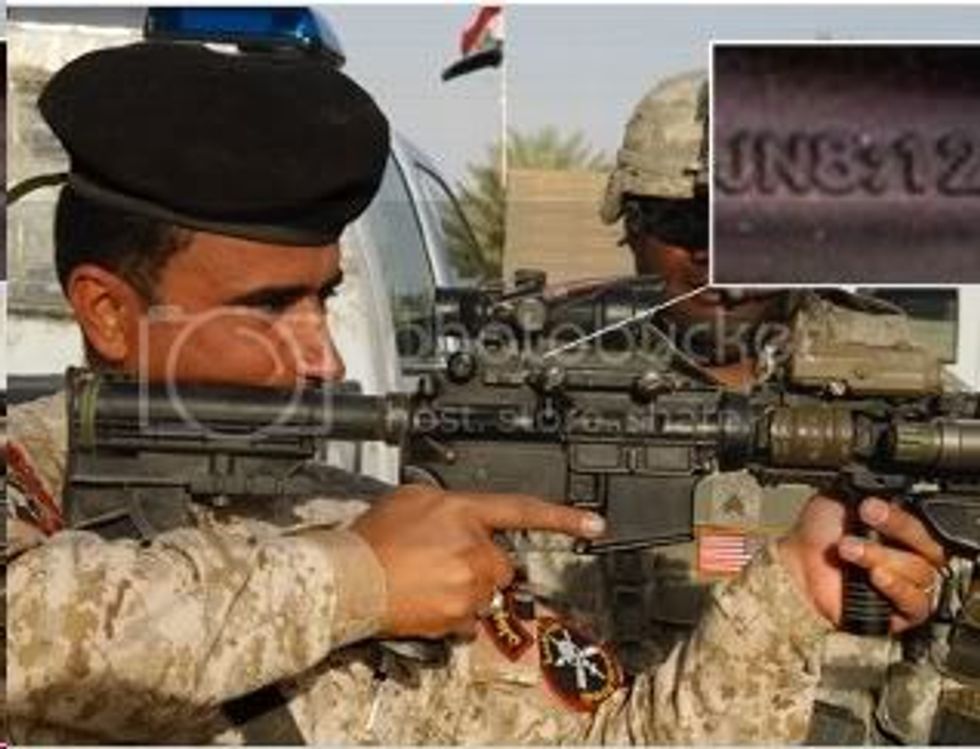 And now we have to cope with theocrat arms manufacturers. What Would Jesus Do, indeed -- lock and load, apparently.

Coded references to New Testament Bible passages about Jesus Christ are inscribed on high-powered rifle sights provided to the U.S. military by a Michigan company, an ABC News investigation has found.

The sights are used by U.S. troops in Iraq and Afghanistan and in the training of Iraqi and Afghan soldiers. The maker of the sights, Trijicon, has a $660 million multi-year contract to provide up to 800,000 sights to the Marine Corps, and additional contracts to provide sights to the U.S. Army.

...Trijicon confirmed to ABCNews.com that it adds the biblical codes to the sights sold to the U.S. military. Tom Munson, director of sales and marketing for Trijicon, which is based in Wixom, Michigan, said the inscriptions "have always been there" and said there was nothing wrong or illegal with adding them. Munson said the issue was being raised by a group that is "not Christian." The company has said the practice began under its founder, Glyn Bindon, a devout Christian from South Africa who was killed in a 2003 plane crash.

Are some in the military angry at this prosyletizing? Sure. But then there are some who are thrilled about guns for God, and they are in charge:

[Michael "Mikey" Weinstein of the Military Religious Freedom Foundation], an attorney and former Air Force officer, said many members of his group who currently serve in the military have complained about the markings on the sights. He also claims they've told him that commanders have referred to weapons with the sights as "spiritually transformed firearm[s] of Jesus Christ."

If that isn't bad enough, in an ABC followup piece, "Marine Corps Concerned About 'Jesus Guns,' Will Meet With Trijicon," we see just how compromised the thinking is in high levels of the military. Mind-blowing:

"We are aware of the issue and are concerned with how this may be perceived," Capt. Geraldine Carey, a spokesperson for the Marine Corps, said in a statement to ABC News. "We will meet with the vendor to discuss future sight procurements." Carey said that when the initial deal was made in 2005 it was the only product that met the Corps needs.

However, a spokesperson for CentCom, the U.S. military's overall command in Iraq and Aghanistan, said he did not understand why the issue was any different from U.S. money with religious inscriptions on it.

"The perfect parallel that I see," said Maj. John Redfield, spokesperson for CentCom, told ABC News, "is between the statement that's on the back of our dollar bills, which is 'In God We Trust,' and we haven't moved away from that."

I don't even know where to begin with that delusional thinking. I realize that at its core, both are Constitutional no-gos, but there is no comparison to it being on currency vs a weapon transmitting a message of both violence and religion in a military conflict where we're already accused of infusing it with theocratic bullshit courtesy of BushCo.