If you're a stunner with washboard abs but haven't shed those holiday pounds you put on because of grandma's apple pie, your friends at BeautifulPeople.com are giving you the boot.

Dating and social network site BeautifulPeople.com has axed some 5,000 members following complaints that they had gained weight.

The members were singled out after posting pictures of themselves that reportedly showed they had put on pounds over the holiday period.

Of course if you were chubby beforehand, you were never welcome on the exclusive site, which filters out the "fatties" to be able to market itself as "the largest network of attractive people in the world."

Beauty standard proprietor and founder Robert Hintze sais that "As a business, we mourn the loss of any member, but the fact remains that our members demand the high standard of beauty be upheld." Of course you can't ignore this blunt money quote:

"Letting fatties roam the site is a direct threat to our business model and the very concept for which BeautifulPeople.com was founded."

Wow, it sounds like garden-variety people of more ample proportions to Hintze are drooling, slovenly, portly pervs in trench coats trolling his digital island of slender hedonism. It's a strange tack to take, to say the least, when the site itself has an interesting message for those surfing with a zero chance of joining if they are perceived as not only porky, but "ugly" in general (boy, that's a grand broad stroke). 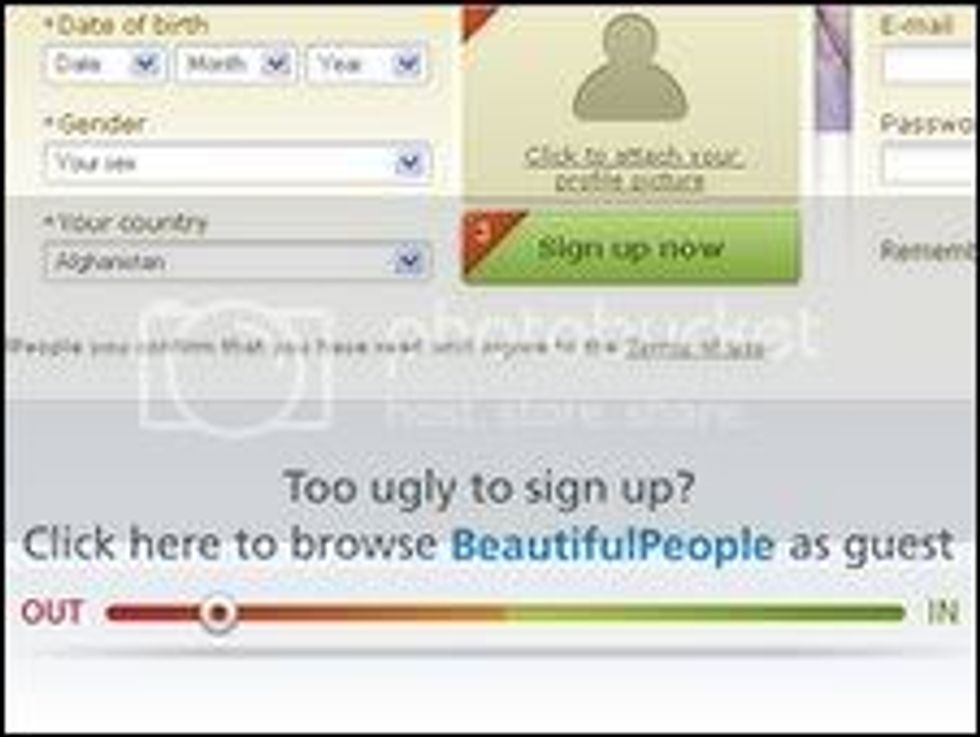 No worries, Mr. Hintze, your "hottie" laser-focused membership is safe; "fat" green dollars can be better spent in the dating pursuit of, um, character. Of course to each their own in dating preferences, but this level of cruel, shallow PR asshattery of Hintze (I'm sure he would label it "blunt) is just another sign of the cultural acceptance of sh*tting on the less-than-svelte.

Question for Pandas: Leaving aside the outlandish statements of Hintze in defense of his site's actions, is this any different than any dating site that self-identifies a preference and does it matter?

It's worthy of discussion because of the rampant level of eating disorders and other behaviors, particularly in young women (and I'm sure a lot of gay men out there can speak about pressures as well), related to self-image issues that ramp all the way up to severe body dysmorphic disorder.