Remarks by the President on rescue efforts re: the disaster in Haiti

Please help people in these dire circumstances. The U.S. State Department Operations Center set up the following number for Americans seeking information about relatives in Haiti: (888) 407-4747. The department cautioned that because of heavy volume, some callers may hear a recording. The State Department said those interested in helping immediately may text 'HAITI' to '90999' and a donation of $10 will be made automatically to the Red Cross for relief efforts. The donation will be charged to your cellphone bill. The department also suggested contacting agencies such as the Red Cross or Mercy Corps to help with relief efforts. 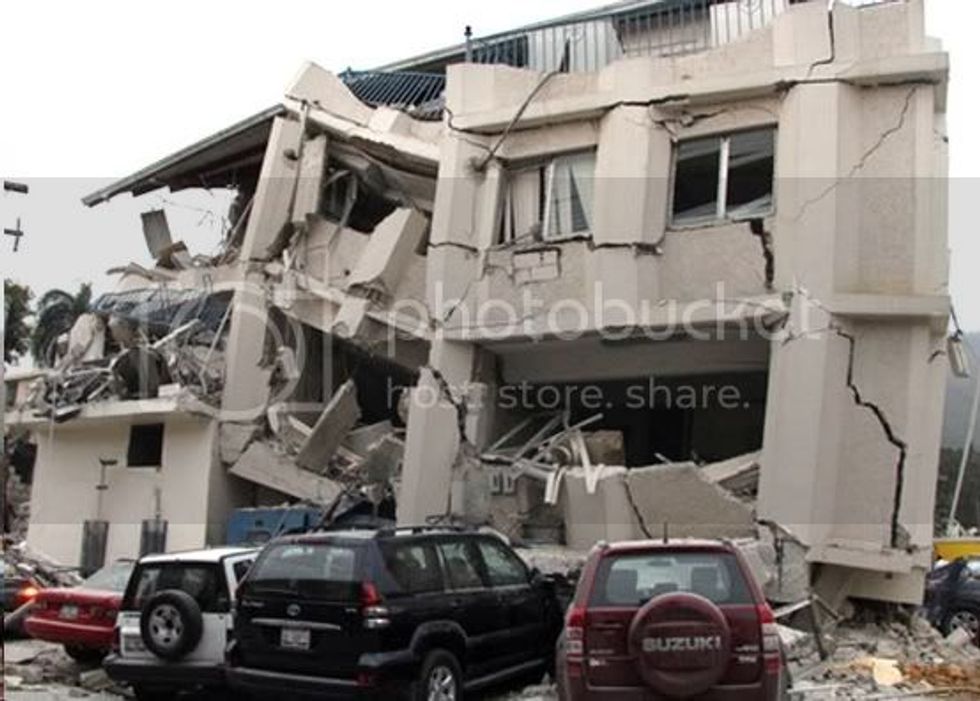 I've been covering the federal Prop 8 case almost round the clock, but a disaster like this makes you think about the larger scheme of things, particularly for those who live in earthquake-prone zones. When your lives are reduced to a lack of even bare necessities, and you don't even know if loved ones are alive, the level of human tragedy is almost unbearable to contemplate. Those who live in Haiti, already the poorest nation in the Western Hemisphere, are going through that pain. (CNN ireport):

A powerful earthquake hit the impoverished country of Haiti on Tuesday, collapsing the presidential palace and raising fears of substantial casualties in what the country’s U.S. ambassador called “a major disaster.” 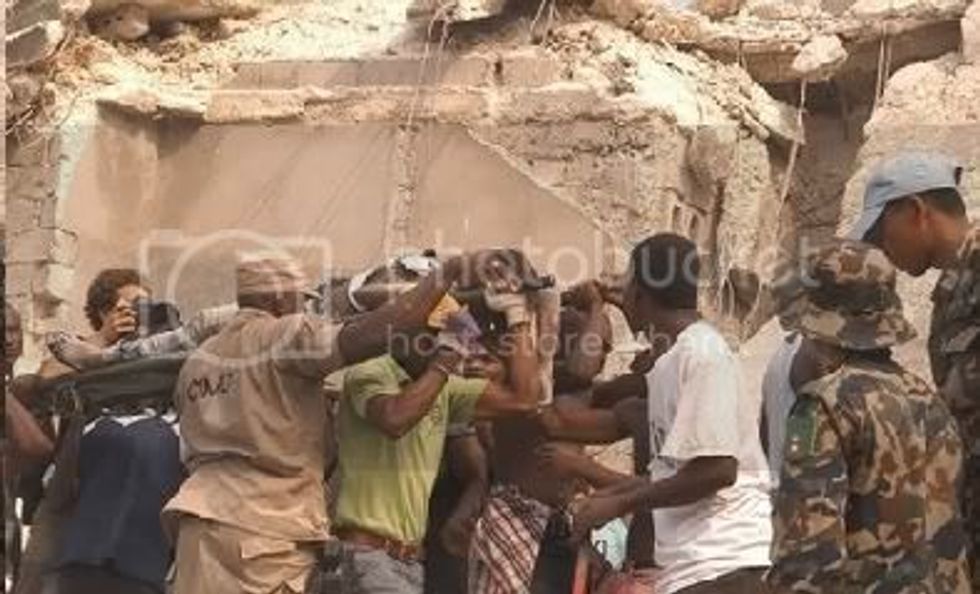 President René Garcia Préval was reported to be safe, but Radio Metropole of Port-au-Prince, the capital, quoted a government official as saying there were “certainly dozens of deaths.”

Dozens of dead and injured people in the street and the streets are blocked in so many parts. 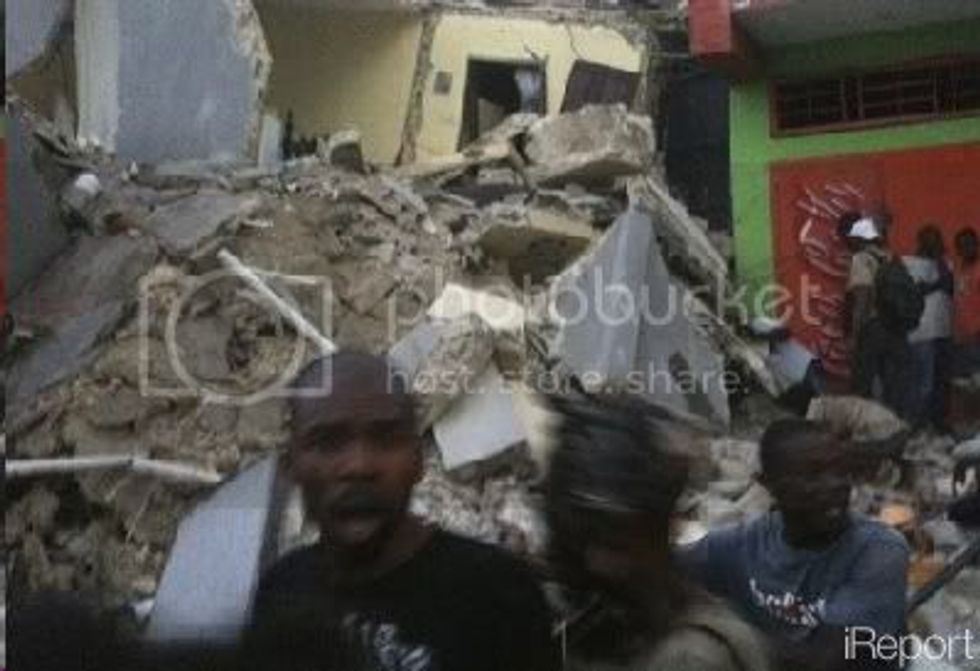 The earthquake had a magnitude of 7.0 and was centered about 10 miles west of the capital, Port-au-Prince, according to the U.S. Geological Survey. It was followed by at least eight powerful aftershocks of magnitude 5.0 or greater, the USGS reported. "People are out in the streets, crying, screaming, shouting," Karel Zelenka, director of the Catholic Relief Services office in Haiti told The Washington Post. "They see the extent of the damage," he said, but can do little to rescue people. "This will be a major, major disaster," Zelenka told the Post.

Numerous public buildings were destroyed along with the palace, including the parliament building, the Finance Ministry, the Public Works Ministry, the Palace of Justice and Cathédrale Notre-Dame de Port-au-Prince, the national cathedral, Haiti TV reported.

The State Department has a phone number for Americans seeking info about family in Haiti: 1-888-407-4747.

Office of the Press Secretary

REMARKS BY THE PRESIDENT ON RESCUE EFFORTS IN HAITI

THE PRESIDENT: Good morning, everybody. This morning I want to extend to the people of Haiti the deep condolences and unwavering support of the American people following yesterday's terrible earthquake.

We are just now beginning to learn the extent of the devastation, but the reports and images that we've seen of collapsed hospitals, crumbled homes, and men and women carrying their injured neighbors through the streets are truly heart-wrenching. Indeed, for a country and a people who are no strangers to hardship and suffering, this tragedy seems especially cruel and incomprehensible. Our thoughts and prayers are also with the many Haitian Americans around our country who do not yet know the fate of their families and loved ones back home.

I have directed my administration to respond with a swift, coordinated, and aggressive effort to save lives. The people of Haiti will have the full support of the United States in the urgent effort to rescue those trapped beneath the rubble, and to deliver the humanitarian relief -- the food, water and medicine -- that Haitians will need in the coming days. In that effort, our government, especially USAID and the Departments of State and Defense are working closely together and with our partners in Haiti, the region, and around the world.

Right now our efforts are focused on several urgent priorities. First, we're working quickly to account for U.S. embassy personnel and their families in Port-au-Prince, as well as the many American citizens who live and work in Haiti. Americans trying to locate family members in Haiti are encouraged to contact the State Department at 888/407-4747. I'm going to repeat that – 888/407-4747.

Second, we've mobilized resources to help rescue efforts. Military overflights have assessed the damage, and by early afternoon our civilian disaster assistance team are beginning to arrive. Search and rescue teams from Florida, Virginia and California will arrive throughout today and tomorrow, and more rescue and medical equipment and emergency personnel are being prepared.

Because in disasters such as this the first hours and days are absolutely critical to saving lives and avoiding even greater tragedy, I have directed my teams to be as forward-leaning as possible in getting the help on the ground and coordinating with our international partners as well.

Third, given the many different resources that are needed, we are taking steps to ensure that our government acts in a unified way. My national security team has led an interagency effort overnight. And to ensure that we coordinate our effort, going forward, I've designated the administrator of the U.S. Agency for International Development, Dr. Rajiv Shah, to be our government's unified disaster coordinator.

Now, this rescue and recovery effort will be complex and challenging. As we move resources into Haiti, we will be working closely with partners on the ground, including the many NGOs from Haiti and across Haiti, the United Nations Stabilization Mission, which appears to have suffered its own losses, and our partners in the region and around the world. This must truly be an international effort.

Finally, let me just say that this is a time when we are reminded of the common humanity that we all share. With just a few hundred miles of ocean between us and a long history that binds us together, Haitians are neighbors of the Americas and here at home. So we have to be there for them in their hour of need.

Despite the fact that we are experiencing tough times here at home, I would encourage those Americans who want to support the urgent humanitarian efforts to go to whitehouse.gov where you can learn how to contribute. We must be prepared for difficult hours and days ahead as we learn about the scope of the tragedy. We will keep the victims and their families in our prayers. We will be resolute in our response, and I pledge to the people of Haiti that you will have a friend and partner in the United States of America today and going forward.

May God bless the people of Haiti and those working on their behalf.

Thank you very much.