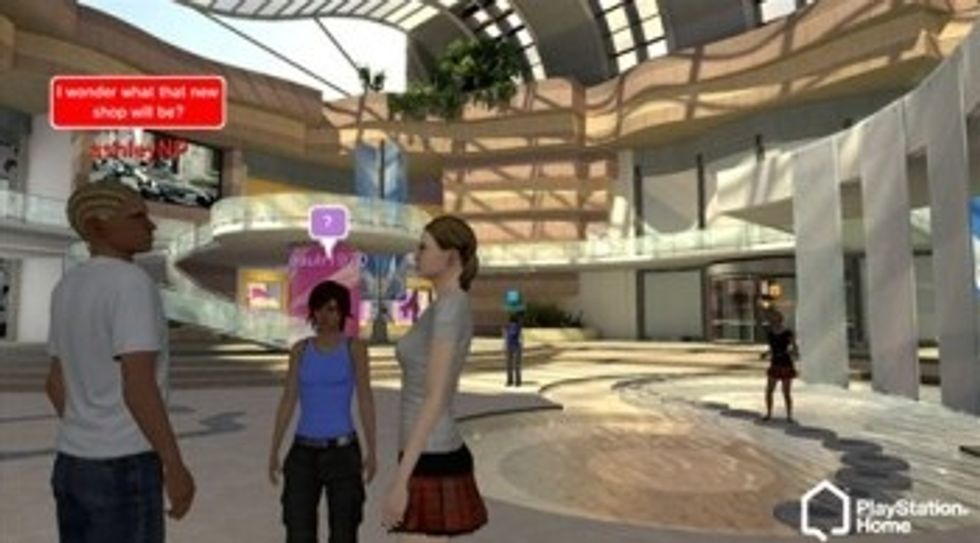 A couple of news items were passed to me by folks, and I thought I'd put them together, because they touch on similar questions about the way that technology's evolution towards replicating human forms for entertainment introduce whole new confusing issues about sexuality and gender and feminism. Or, to put it another way: Brand new technologies, same old assholes. And as the distinctions between the self and the outside of the self are collapsed with the increasing amount of time creating communities in virtual spaces, women are getting the shaft, because of the long-standing tradition that holds that women can be regarded as no more than objectified bodies.*

The first story was sent to me by Tobasco de Gama, who blogged about it here. Essentially, a dude complained on a gaming forum that his roommate was considering abandoning a PS3 game called Playstation Home, because some dude in the game singled her out for sexual harassment. (He insisted on stalking her avatar throughout the game and crouching behind her in a threatening manner.) Unfortunately, the whole thing got ugly because the woman and her friend used the term "assault", which opened up the door to people doing what they're going to do, which is to immediately hide behind the fact that her corporeal body was not threatened in order to excuse the behavior. Well, okay, it's not assault, but it is harassment, and it functions in the same way cat-calling and public groping do, which is to make the groper/harasser feel powerful and to make the space unfriendly to women, who the harasser views with contempt.

The virtual nature of this may make it less scary, but it doesn't change the fact that the man in question imported real world tactics to oppress women into an online format. The commenters on the article dismissed the complaints by pointing out that there's a similar kind of behavior in the game Halo, where you run over someone you shot and squat over their face, essentially "teabagging" them. But as Tobasco points out, that actually doesn't detract from the woman's argument, but adds to it:

It’s quite obvious that “teabagging” opponents in online games is a form of humiliation intended to express dominance over the defeated player. I’m a little ambivalent towards this in the context of a competitive game, since often trash talking can be part of the fun. (See: the “taunts” in TF2 and a lot of other multiplater games.) The difference here is two-fold: First, this occurred in a social game, not a competitive game, so dominance displays are at the very least out of place and, frankly, would be considered quite rude even if the interaction involved two male or two female players.

He also points out that this is a man doing this to a woman because she's a woman, which is an entirely different context than some dude trash-talking an opponent (male or female) according to the observed social rules of the game. (That's another discussion.) This guy was referencing real world assaults on women's lives and dignity in order to ruin her experience of the game. And he did it to express hostility towards women for being women. Like a groper in the non-virtual world. Intent and context are what make sexual harassment and assault so upsetting in the real world, which is why they are a serious problem in the online world. The notion that this doesn't count because her physical body wasn't in play reinforces the worrisome idea that a woman's physical body counts for more than her subjective experiences.

The other story is kind of the flip side of this---an attempt to reduce women to bodies without subjective experiences of any importance. This dude invented a sex robot, with the telling name True Companion (since those insufficient real women aren't true enough companions, with their opinions and moods). I watched the somewhat boring interview with the creator because I was curious about why on earth you'd spend so much time on making something that will only matter to a tiny sliver of the population whose abhorrence of women outstrips their disgust provoked while gazing upon an exemplar of the uncanny valley. It was very....revealing.

The main reason it was revealing is that men who get deeply into this shit are often excused---and because of it, they play this part to the hilt---as being sad, lonely losers instead of misogynists, as if those two categories are mutually exclusive. We're told that it's mean to be horrified by them, that they are pitiful and definitely aren't motivated by loathing for women---and that feminists who do discuss this phenomenon are bitchy cheerleader types (which of course is why the non-existent misogyny is so justified). But what really jumped out at me in this video was that this guy has programmed the sex robot to have all these different "personalities", and that the very first one listed is the rape victim.

Oh, he doesn't call her the rape victim. He gives her the cutesy (rape-justifying) name of "Frigid Farrah". But when he's eagerly explaining what she does, it's basically that she protests and you rape her. I'm sure halfway through the rape, she's programmed to start liking it, because that's part of the fantasy, that women secretly enjoy being humiliated and degraded by rape.

So what?, you might ask. Better that guys with rape fantasies take it out on a doll rather than real women. And sure, I agree. (Though I will put even odds that someone will whip out this strawman and accuse me of saying just the opposite.) But it gives lie to the argument that guys like this are just sad sacks and not motivated by contempt for women. And just in case that doesn't come across loud and clear, the guy goes out of his way to say the most appallingly mean things about women. He claims the doll is built like a "real woman"---with, in his words, "three inputs"---which of course is a way of saying that real women are basically a bunch of fancy holes to stick your dick into, and not much else, even though said "inputs" have other functions besides getting fucked in them. (The mouth even has the appalling function of eating and being used to communicate desires and opinions!) And Figleaf has another oh-so-wonderful-just-a-sad-sack-not-a-misogynist-quote from the guy:

“She can’t vacuum, she can’t cook but she can do almost anything else if you know what I mean,” TrueCompanion’s Douglas Hines said while introducing Roxxxy.

Women: holes that do housework. That's what I mean by objectification.

Hines goes out of his way to say that he programmed the doll with "personalities", which of course is one of those double-edged swords. Defenders will snatch on that as evidence that these robots are for lonely dudes** who want a personality and everything! But of course, that's moronic. The dolls don't have personalities, they have pre-programmed sexual fantasies. By touting the "personality" aspect, Hines has his cake and eats it, too---relies on the lonely dude stereotype in order to distract people from the appalling misogyny, and he gets to convey the message that the only relevant aspect of a woman's personality is how she performs in bed.

To repeat: I'm not saying that misogynist dudes can't have their sexual fantasies, nor am I disagreeing that it's probably better that they just leave real women alone. What I am saying is that the refusal of people to admit that these sorts of things are in fact misogyny, and to hide behind the virtual nature of it or to otherwise make excuses is a serious problem. Maybe it is difficult to root out a sexual fantasy, and that's fine---if the man with a misogynist fantasy realizes that's all it is and he seeks safe, non-hurtful ways to express it, while otherwise respecting women and believing they are full human beings. But that's simply not going on here, and thus the space that's created, instead of containing misogynist fantasies, is encouraging nasty attitudes about women (that they're holes who do housework) to be spread around willy-nilly.

*There's a long-standing problem of people using the word "objectified" to mean "observed in a sexual manner". That's not how I use it---you can look with lust and not objectify, and lots of objectification of women is outside of more pornographic contexts. The religious right objectifies women, for instance, by defining them as walking wombs whose experiences of the world matter less than the contents of their uteruses.

**Notice that the sexual needs of lonely women are considered so unimportant that they not only don't deserve robots, but they don't even merit a discussion of why there's no sex robots for lonely women.