The quick news story to kick off this Friday's Genius Ten: Turns out The Princess and the Frog had lackluster box office, and now the blame game has begun. One could point out that perhaps the problem is that the movie came out in the midst of the worst recession in the U.S. since the Great Depression. Perhaps many parents thought to themselves, "Instead of ponying up the cash to see this movie multiple times, we could just put the kids in front of TV to watch The Little Mermaid or Cinderella or Beauty and the Beast for the umpteenth time, since all these movies have exactly the same plot and aesthetic. And we'll buy Princess when it comes out on DVD."

But who wants to consider factors like that when you can always resort to straightforward sexism? No, Disney has decided that girls suck, and what they need to do is stop making movies centered around them. They've retitled the upcoming Rapunzel movie Tangled and have made the prince the center of the story, and they've shelved The Snow Queen, with its scary, female-centric title.

Of course, Disney did this once before, making Aladdin to break up the supposed monotony of female-centric fairy tale films. It did great box office, but it was riding the Beauty and the Beast coattails. And in the subsequent years, what character did they make a killing merchandising from that movie? Oh yeah, the love interest Jasmine. Because the Disney Princess brand is making them a killing! But the idea that female money spends as good as male money is something Hollywood has never wanted to hear. The funny thing is that the Disney aesthetic is associated with little girls in the public mind, so no matter how butch they try to make Tangled, it's going to be all about the little girls. But at least the executives can sleep better at night, having convinced themselves they avoided the hellish emasculation of making their money selling fantasies to little girls. Apparently, the fact that those fantasies are utterly sexist wasn't enough to stop the smarting.

Genius Ten's original song is chosen for this story, of course. Leave yours in comments. Or make fun of this story. Or say whatever you like, Genius Ten's should be considered open threads.

1) "Pieces of the People We Love"---The Rapture

5) "Girls In The Back"---White Rose Movement

Videos and a cat pic under the fold.

Molly has been a real lovebug lately. I sat on the couch yesterday to finish reading Carole Joffe's page-turner Dispatches from the Abortion Wars: The Costs of Fanaticism to Doctors, Patients, and the Rest of Us, and Molly jumped up on the couch, crawled inside my blanket and purred as loud as I have ever heard a cat purr. I didn't get a picture of that cuteness, but I did get her snuggling my feet while we watched "The Shield". 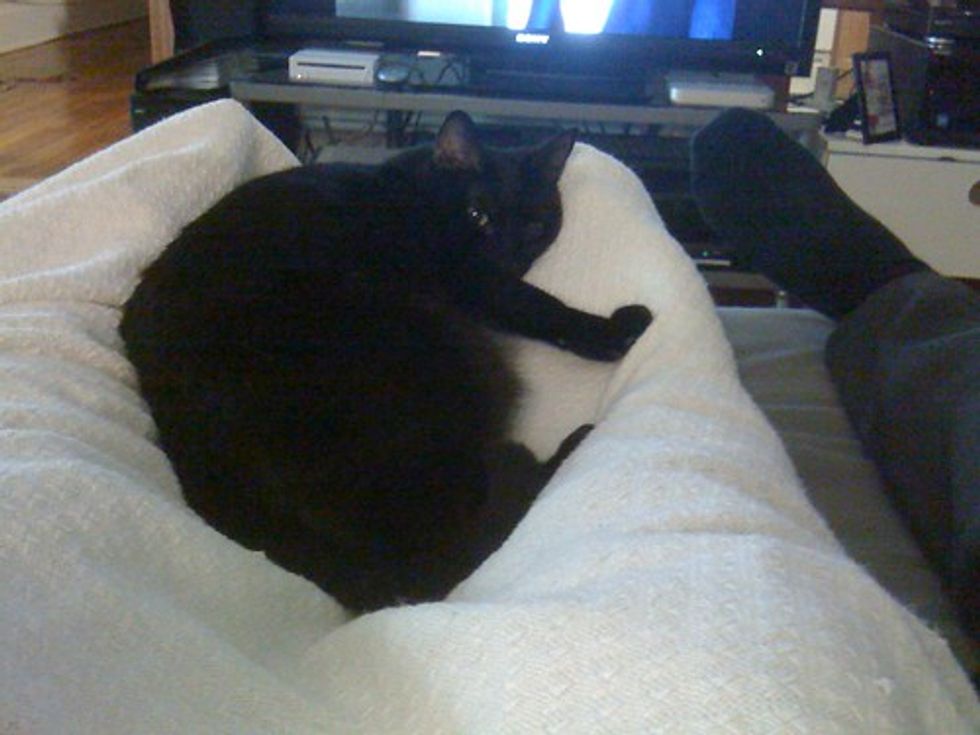 I can't tell if she loves me, my blanket, or if it's the combination that's so intoxicating.