How covering up for abuse is sadly common 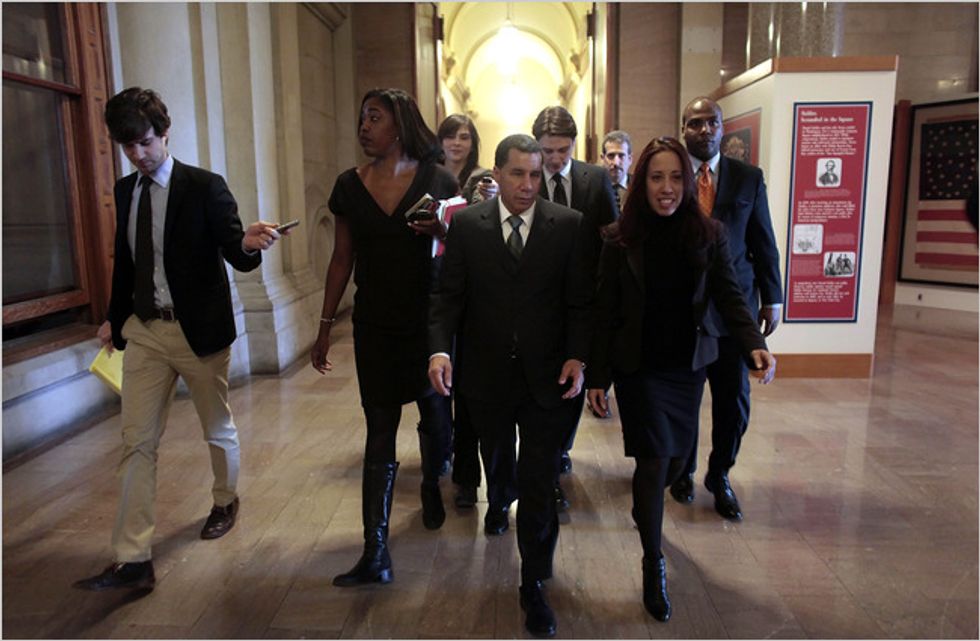 With all this feminist discussion as of late---and because I live in a brand new state with brand new politicians---I'd be remiss in not talking about this David Paterson situation. Seems the trade-off is between governors who do their evil at home and those who inflict it on their constituents, as is the tradition in Texas, at least since we gave up Ann Richards. As a constituent, I prefer the former, of course. As a feminist, I must weigh in on this scandal, and why domestic violence and the aiding of it isn't really a "personal" issue at all.

The NY Times has been building the case against Paterson for awhile now, and the latest tip off can be read here. If Gov. Paterson did pressure a girlfriend of one of his aides to drop charges of domestic assault against her, then he's done something very serious indeed. Of course, what he did is also excruciatingly common, far more common than situations where a man beats his wife or girlfriend and faces actual consequences with his friends---which is what Paterson was to the accused, as well as his employer. What I want from this whole sordid situation is for people to understand that what happened is so common as to be mundane, and to start thinking about what it would take to really address domestic violence. I suggest that we start by considering it truly awful to beat a woman. The dirty little secret of the Paterson situation is he reacted like many and I'd guess most people that know a man who beats his partner do---by backing up the man, and blaming the woman if she makes a fuss. It's one of those many male privileges you hear so much about.

Do people back up abusers and pressure victims to shut up and behave because they love wife-beating? No. It works the same way as rape. They just define what their friend did as somehow not the behavior in question. Real wife-beating looks like X, they tell themselves, and this looked like Y. If a victim cried too hard, protected herself, or yelled at the abuser during one of his rages, then they chalk it up to "fighting" and blame her as much if not more, even if she was actually cowering below his fists. With that in mind, let's look at the information the NY Times gathered.

In an interview with The New York Times, the governor had characterized the fight as being “like breakups you hear about all the time.”

What are the actual accusations, though?

Mr. Johnson’s girlfriend had accused him of choking her, smashing her into a mirrored dresser and preventing her from calling for help during a Halloween altercation in the Bronx apartment they shared.

Well, yes, you do hear about those all the time. Domestic violence happens all the time, sadly. But what we can say is that if the accusations are true, then Paterson is a classic enabler, minimizing the abuse and using common tropes to do it.

Why does this happen? From the literature on domestic violence I've read and people in the know I've talked to, the reason is as simple as it is depressing: In most cases, the people in the couple's social network like the abuser more. You know how you know couples and you like one more than the other, and it's because you either know them better or find them more charming? Abusers deliberately set out to create that impression in their friends' minds. First of all, abusers can be very charming, and in lieu of that, they can make themselves indispensable. (That's how they got their victims to commit, after all!) Second of all, abusers find excuses to separate victims from their friends and family, not letting victims socialize much (and blaming them to others for being shy when asked about it, making people like the victim less), or letting her only socialize on his terms. This strategy can be implemented pretty subtly---making it so miserable for her when she sees her friends through complaints that she starts to roll back on those relationships, poisoning her against her friends, or even moving her away from her support system. Abusers exploit sexism, notably the sexist belief that men are fun-loving guys while women are nagging bitches. And the abuse itself also helps. Abusers can be glowing with power after they've forced a woman to submit, but she will be tired and depressed. Glowing people are more fun to be around than depressives, and so he gets more points against her. When the abuse finally comes out, their social network is ready to turn on her.

What Paterson purportedly did is super-duper common. But that it's common is all the more reason for the public outcry to be strong, and for him to resign. The only way to start taking domestic violence seriously is for people to, you know, actually take it seriously. And to start blaming wife-beaters, instead of making excuses for them or finding ways to discredit or intimidate their victims when they finally speak out.