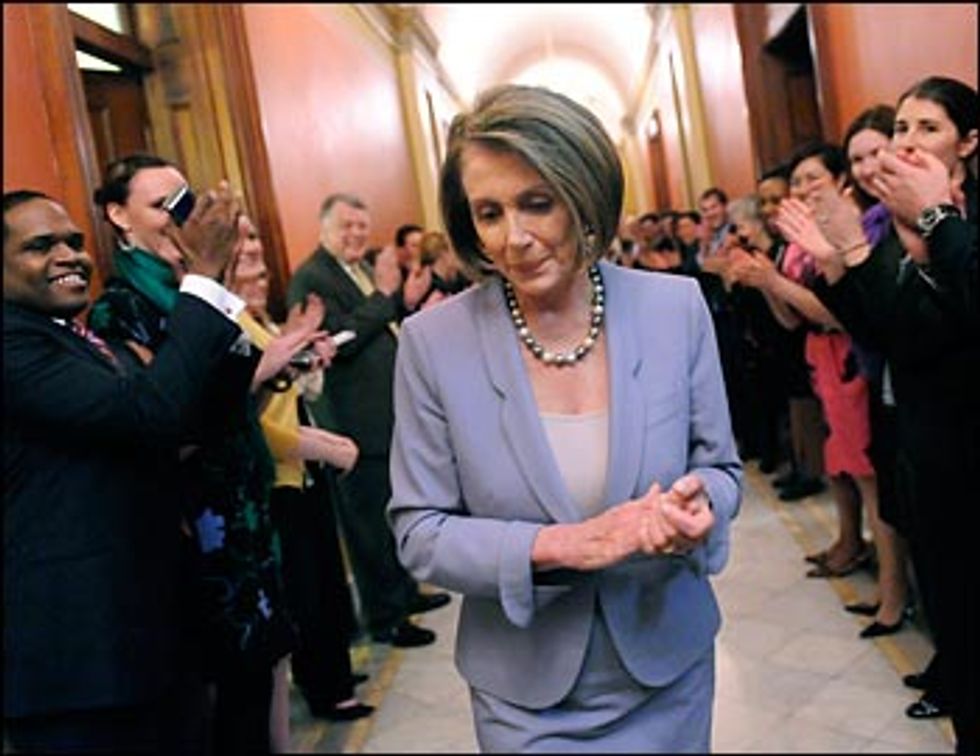 Digby is amused/disgusted at conservatives who simply will not accept that having a majority in both houses of Congress and having the Presidency means that Democrats get to pass legislation. It's been a common theme---making arguments about how "the people" don't want this, arguments that imply that the Democrats got power by sneaking in and taking it without anyone noticing.

It's fairly clear that Republicans don't understand how democracy works. You campaign, people vote, you win elections, you get a majority, you pass legislation. They seem to think Democracy means that that elections are irrelevant, majorities are meaningless and that all legislation is contingent upon the permission of the Republican Party.

I had that same moment watching this video of a woman who seems to think she lives under a tyrannical system where Democrats grabbed power by force and are shoving things down her throat, the #1 favorite metaphor of Republicans.

She's engaging in fantasies of armed rebellion, and that tends to grab your attention, but what's interesting is that in order to justify these claims to the right to armed rebellion, conservatives have to claim to be speaking for a majority. But of course, the problem with this is that Democrats won and won big. How do they reconcile their views with these unfortunate facts?

Well, it's simple, really. They assume, if they don't state it outright, that large numbers of American voters shouldn't have the right to vote. That's the implicit argument when Sarah Palin praises white rural voters as "Real Americans", when Birthers obsess over the idea that the first black President simply can't be eligible for office, when tea baggers yell racist and homophobic slurs at politicians, and when they insist that you eliminate black voters from the count if you want to find out how popular a politician "really" is. When Bart Stupak laughed out loud at the very idea that nuns have opinions worth listening to---and listed a bunch of men whose opinions were the ones that counted---you had a similar sentiment being expressed. Universal suffrage seems like a fundamental part of democracy to liberals, but it appears that conservatives think it de-legitimizes the results of elections. And that if you do something without Republicans on board, you're eliminating those who represent the only people who count.

The irony here is that Republicans are already way overrepresented in Congress. Because of the constitutional rules that give every state two Senators, no matter how underpopulated the state, you see rural, white-dominated areas having way more representation than they deserve. For instance, South Dakota has a little over 800,000 residents, but New York has almost 20 million. New York City has over 8 million people alone, which means that if the Senate had a representational system like the House, just the city of New York would be owed 20 Senators to compete with South Dakota's two. Think about how irrelevant the Republican party would be---at least the current wingnutty Republican party, since it's obvious New York can elect Republicans---if representation was actually fair.

Republicans are way overrepresented, and yet they act like someone stole their cookies. This is par for the course when it comes to conservative thinking, where entitlement is considered normal and fairness an encroachment on what's right and just in the world. So a social contract where people who create wealth through labor are allowed some of the spoils is considered "socialism", and certain forms of work are not considered work at all, because they're performed by people who don't count in the Republican hierarchy. (Thus, conservatives brag about how they're "producers" while denying that people who provide labor in various low-paying jobs produce anything, even though our society would come to a grinding halt without them.) Or think of the gay marriage debates. When you boil it down, the whining about "protecting traditional marriage" is nothing more than suggesting that straight people deserve a cookie for being straight, and that's it. You can continue in this vein, but I think the point is clear---a one person, one vote system offends their sensibilities, and conservatives think your vote should count significantly less and possibly not at all if you belong to a group they dislike. Maybe knock 25% of its value if you're gay, 25% off if you're not white or not male, another 25% off if you live in an urban area, and small percentages off for each violation of the culture war codes. So, if you prefer wine to beer, 2% off. If you work in a creative industry, 5% off. For every green action you take, 1% off---recycling 1%, driving a hybrid 1%, reusing cloth bags instead of plastic ones at the store 1%. If you're a woman who didn't change her name when married, 10% off. I could go all day, but you get the picture.