Video: Lt. Dan Choi didn't get that phone call while detained in the DC jail

(As A diarist at my pad noted that Dan also had words for Kathy Griffin and HRC.) 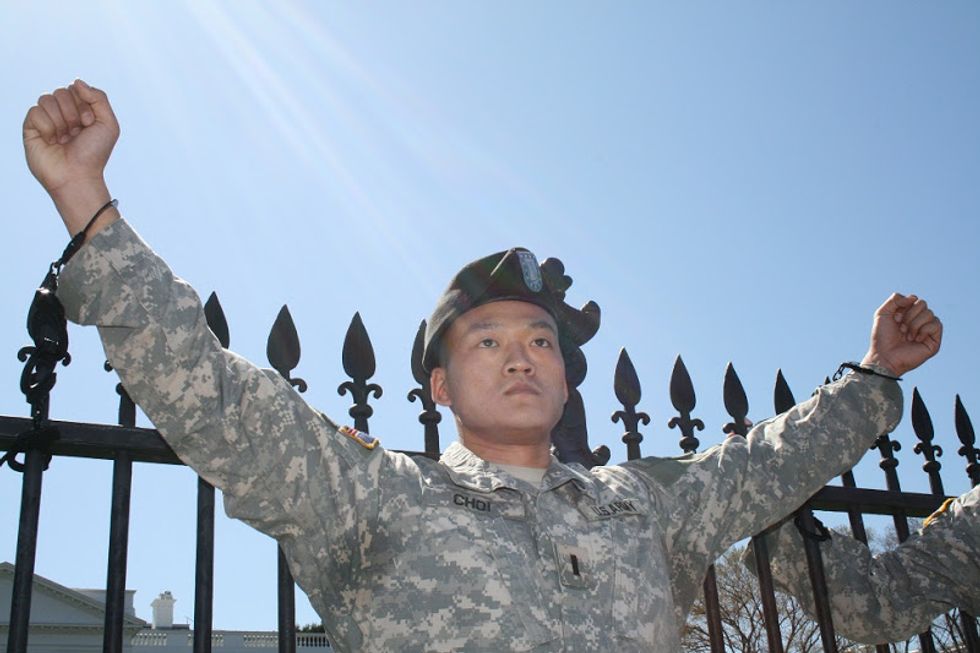 "I asked seven or eight times to speak with a lawyer. I was not given a phone call. I was called a liar by one officer."

-- Dan Choi, on what really happened during that night in jail after White House protest, to Newsweek.

In this week's Newsweek, Eve Conant has a writeup of what occurred last week when Lt. Dan Choi and former Army captain Jim Pietrangelo did their White House protest against the slow-mo action on DADT repeal.

Lt. Dan Choi, a West Point graduate and fluent Arabist being discharged from the Army for being openly gay, was arrested last week along with former Army captain Jim Pietrangelo II, after handcuffing themselves to the White House gate in protest of Don't Ask, Don't Tell. They were handcuffed with the help of Robin McGehee, a former PTA president turned activist who last week cofounded GetEQUAL, an LGBT activism group inspired by civil-rights organizations and gains made through civil disobedience. "We've held marches, lobbied, manned the phone banks," says McGehee. "The last resort is to rumble."

Along with Conant, I was in the D.C. Superior courtroom reporting on the arraignment, as was Joe Sudbay of Americablog. Conant scored an interview with Dan; the most newsworthy bit in the piece is that she confirms what I also learned from him:

What was it like in jail? Were you at all scared at where this might be headed?

I asked seven or eight times to speak with a lawyer. I was not given a phone call. I was called a liar by one officer; I was scoffed at by another one. But there were others who wanted to talk with me about their service. The first time I saw a lawyer was in the courtroom, and I didn't know who he was and I couldn't understand what he was telling the judge at first. I asked him, "Did you just plea for me?"

Both men pleaded not guilty and are preparing to stand trial. They have to appear with attorneys on April 26, before the same judge who helmed the arraignment.

Here's a video -- with exclusive footage -- that sums up the action and confirms Newsweek's account.

More below the fold. As an aside -- readers may not be aware that last month, Dan Choi stepped down as a spokesperson for KnightsOut, the group of LGBT alumni of the U.S. Military Academy at West Point, so his personal activism is now through GetEQUAL.org, which also sponsored the Pelosi ENDA protests.

There has been an interesting response privately and publicly by members of the military community. While I spoke with some at the SLDN dinner who were supportive privately, many are publicly opposed to the direct action or fall into the "he is entitled to his belief and approach" kind of comment.

Here are a few remarks from the founding board members of

“While we at Knights Out are heartened by the progress that’s being made on repeal of the ‘Don’t Ask, Don’t Tell’ policy, and we don’t support Lieutenant Choi’s tactics, I think we can understand his impatience. Dan is a passionate, idealistic young man. I think Dan feels, more keenly than most, the clock running out on the military careers of gay and lesbian Soldiers.”

“I’ve known Dan Choi since we were at West Point together. He is one of the most dynamic people I know, and that’s why we insisted on getting him on the Knights Out Board when we started. Dan doesn’t do anything half-hearted – even when you don’t agree with him, you have to recognize his commitment to what he believes in.”

“We owe a huge debt to LT Dan Choi – there’s no way that Knights Out and the DADT-repeal movement would have made the progress we’ve made over the past year without Dan. I think that the action he’s taking now is wrongheaded, but I know he’s doing what he thinks is right.”

All this says is that for those working on the political end of moving policy forward -- and changing minds, direct action is always seen as too controversial or even counterproductive from that POV.

The axiom that the direct actions on the perceived extremes moves the ball forward for those working from within is true, of course, so you'll rarely get any institution or organization to admit publicly that "renegade" direct peaceful protest is a legitimate tool for political progress. If you make direct action too planned, clean and pretty and not spontaneous, the maximum power of the point is lost. And that's just reality-based politics in DC no matter what the issue is.

But for those who do put themselves on the line, it does come with personal sacrifice for the good of others and the big picture. It is a leap of faith meant to shake up the political game.