Since the 4th was a Sunday, it looks like everyone's basically taking today off, so I thought I'd skip anything news-driven and instead whip out a little skeptical posting. Sadly, I've been avoiding this somewhat out of cowardice, but frankly, that's no excuse. Most people are in the "ignore them and they'll go away camp" when it comes to conspiracy theorists, but I'm not, so I'm a perfect person to try to push back against them. And I want to push back against the zombie conspiracy theory about Sarah Palin's 5th child, Trig. Andrew Sullivan just won't let this one go, and the conspiracy theory mania is spreading amongst people I otherwise respect. The theory, in case you haven't heard it (but I'll bet you have, which is why simply ignoring conspiracy theories doesn't work), is that Sarah Palin only pretended to have her son Trig, but was actually covering up for Bristol's pregnancy.

The "evidence" for these claims:

1) That Bristol took some time off school in 2008. This is the least interesting evidence to the theorists, from what I can tell. The reason is that focusing on Bristol is rhetorically unwise of them, because if you believe the theory, you have to accept Bristol conceived a second time while still pregnant. So they shy away from this one.

2) That Bristol cuddles Trig a lot. You rarely see this stated so bluntly, but theorists enjoy putting up pictures of Trig being cuddled in public by Bristol, implying that she, as the mother, cannot resist this.

I'm forced to point out that an alternative theory is that people in general like to cuddle babies. And that families that have much-older daughters and infants at the same time are known to employ the daughters in baby care. The pictures of Bristol cuddling Trig invariably are taken when Sarah is doing something like, oh, speaking at a convention, and therefore can't be holding a baby right that second. The natural person to shove the baby off on is Bristol.

3) Palin didn't show very much. It's interesting to me that the theorists focus most of their energy on the Sarah Palin half of the equation, because focusing on the Bristol part would actually produce better evidence, if this deceit actually occurred. Even though I'd imagine it's harder to prove that someone wasn't pregnant than that someone was, they find way more emotional satisfaction going after Sarah Palin, so they do that.

Anyway, I find the evidence that Sarah didn't show to be meager and embarrassing. It was remarked upon at the time that she didn't show much, but people didn't seem to make much of it. I suspect this is because they were willing to accept that some women don't show very much. I remember a woman I knew in high school talking about how she never wore maternity clothes, and to look at her, you would have never known. On litbrit's post, you get women using a bunch of "I" statements, as if this is proof. For instance:

at that point [seven months], i couldn't see my feet without considerable effort, and i kept bumping my belly into things because i wasn't used to the bulk.

That some or even most women blow up during pregnancy isn't proof that all do. One in 600 women who give birth didn't even know they were pregnant. There's even a TV show about it! In most cases, it's a matter of denial, and in some, the women involved are just big to begin with and so they don't show at all. But not always---and if they're able to fool themselves, they were fooling others.

Let us consider Sarah Palin specifically. We know that she's extremely vain and a workout fanatic, the former being a venial sin in my book and the latter being pretty much the only thing I like about her. But between these two facts, I think we have a pretty good explanation for why even a somewhat smaller woman might not show. On the latter, I think that a lot of people really don't think about how much difference having a ton of abdominal muscles can make. We think of hard muscles as being a wall against the outside---think of the accidental kicks to the stomach the super-muscular soccer players in the World Cup are able to back bounce from---but they also work perfectly well at holding up the insides. If Palin was doing a bunch of sit-ups before, it's possible that this happened. According to the Royal College of Midwives, strong abdominal muscles can indeed hide a pregnancy: some women "have very tight tummy muscles so the bump is not apparent."

Which is what I think is going on in the pictures that the theorists whip out of Palin. Sullivan uses this picture, taken a few weeks before Trig's birth, to "prove" that Palin wasn't pregnant: 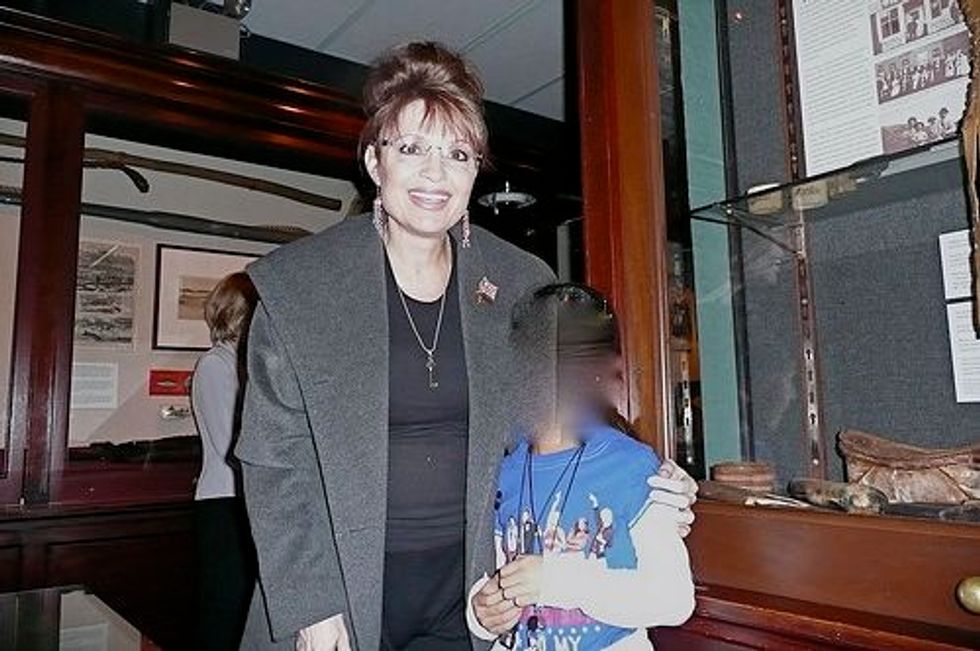 Except, of course, Palin is actually showing a gut. Frankly, for someone who works out as much as she does, and is as thin and vain as she usually is, being pregnant strikes me as the only reason she'd allow a picture to exist that shows a wrinkle over stomach. No, it's not a huge gut, but it is absolutely a gut.

Litbrit posted this picture of Palin at 8 months: 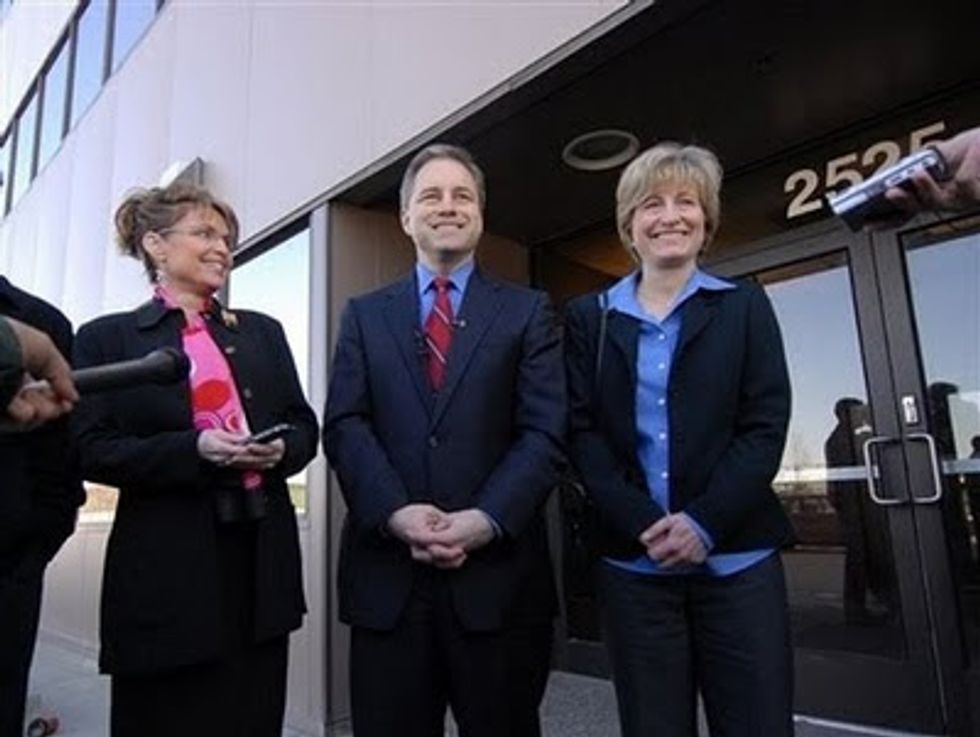 Between the funny camera angle and the fact that Sarah is sporting the posture of a pregnant woman, I'm going to have to say that this picture looks like that of a pregnant woman who has a skill at dressing in a way to hide it. It's almost as if she's really vain, and would spend a lot of mental energy trying not to look like she's hugely pregnant. Some pregnant women see being pregnant as basically a vacation from the relentless pressure to be svelte, but believe me, that's not always true---I see plenty of pregnant women at my gym who seem determined not to gain an ounce of weight that isn't baby.

And I must point out that Palin was never actually a full nine months along---she gave birth to Trig a month prematurely.

4) Sarah Palin got on a plane while having contractions and flew all the way to Alaska from Texas. I've never understood why this is supposed to be proof of anything. Palin wouldn't be bragging about this if she was hiding something, I suspect. Her explanation for why they let her on the plane---that she didn't show much, and so they probably didn't even notice---makes perfect sense both from a pragmatic point of view, and it's pretty typical of Sarah Palin to be so egotistical and entitled.

Litbrit claims it would be impossible to fly during labor, because it's so painful. But there's no reason to think she was in heavy labor during the flight; she didn't give birth until hours after she got off the plane. Nor is there any reason whatsoever to think that the labor itself was a horrible ordeal. How painful labor is varies dramatically from woman to woman, and in some women, the cervix opens up without a lot of struggle. I'd imagine that's particularly true on baby number five.

We know for a fact that Sarah Palin is an impulsive person who is rather disdain of rationality. It's not hard to imagine a woman like her immediately boarding a plane so she could give birth at home where she's comfortable, instead of rationally thinking through the potential consequences. If you fly a lot like politicians do, you probably stop thinking of the plane as this scary, trapped experience. Moreover, rural people aren't unused to the idea of women traveling far during labor to give birth, as that's something that women who don't have immediate access to a hospital because they live out in the boondocks have to do. I've definitely heard of people getting in a car and driving 3 hours to get to a hospital while a woman's in labor. Sure, the flight from Texas to Alaska is a lot longer than that, but at that point, you can easily see someone deciding that it's not that much longer.

If all this bores you, sorry to spend so much time debunking this conspiracy theory, or at least demonstrating that the supposedly hard proof against Palin is weak indeed. But there's a real danger when conspiracy theories are spun out without a debunking. The Palin conspiracy theory seems tailor-made to rob liberals of our moral authority against nutty right wing conspiracy theories. It allows false equivalence to sneak in---both sides have their Birthers! It deprives people of the ability to concoct genuinely interesting analysis grounded in reality. It's a waste of time and energy.