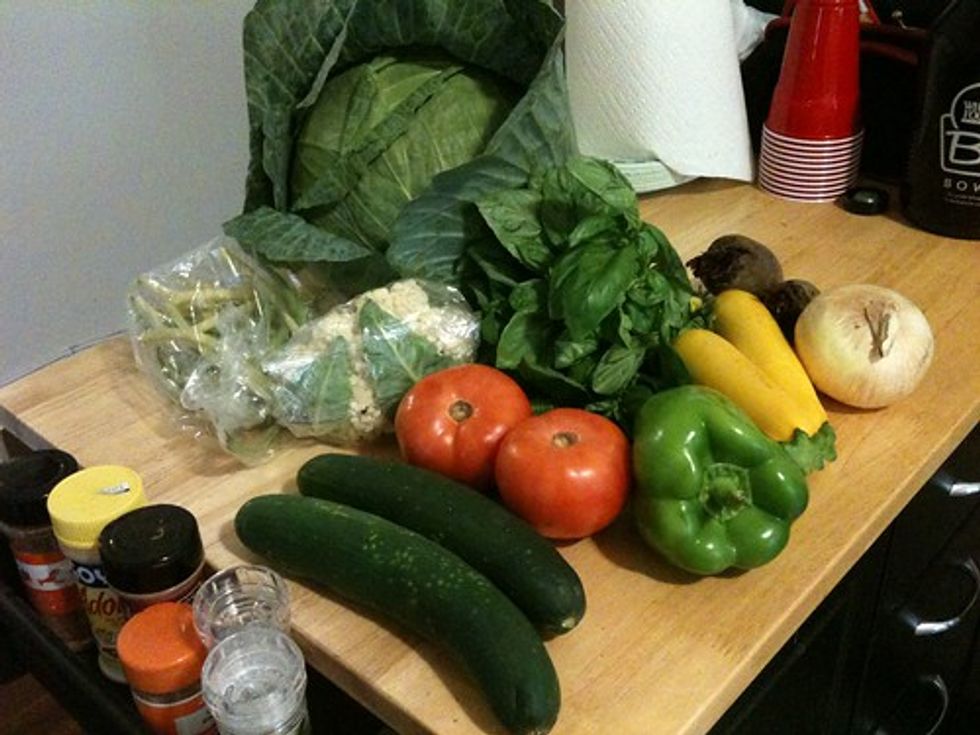 I want briefly, because I know it’s going to come up, talk about the issue of privilege. Yes, I have a lot of privilege living in Park Slope in Brooklyn (though I don't belong to the Park Slope CSA---but I'm super lucky to be a member of the Ditmas Park one.) But I don’t think that should mean this project is not worthwhile. Privilege has uses besides being something to sit around feeling guilty about to no one's benefit. You could use it to give back by reducing your carbon footprint and helping out local farmers. In addition, a lot of the vegetables you have to learn to work with in CSAs are the ones that are cheap at the grocery store (like greens are in the South). Learning to cook with cheap vegetables can save anyone money.

Two privileges I don’t have: a dishwasher or a lot of counter space. However, I grew up without the former and I have basically never had the latter. I promise you that neither is a deal-breaker. Dishwashers basically save no real time, if you learn how to wash dishes properly. (Use the stove to dry pots and pans.) The key to getting around no counters is to have lots of mixing bowls to dump chopped vegetables in.

I do realize this project doesn’t do anything to address the massive problem of food deserts or the inability of people to break out of a sedentary lifestyle. But it does help address another obstacle for modern people who’d like to cook more, which is, “How on earth do I turn all those raw ingredients into actual food?”

As per the request last week, yes please leave ideas and comments and your own adventures in comments! Everyone could use more information.

Now, on to the program.

I still had zucchini and basil left over from last week, and the basil was looking kind of wilty. So I decided just to cook it up and store it for later. It was Saturday morning, which means the farmer’s market is super close to my apartment, so I ran over and got some onions. Organically grown onions are a major reason that I think that it’s just not right to say that the farmer’s market is always too expensive. I got two purple onions for $1, and when they’re organic, they’re way more potent than the ones at the grocery store.

I cooked the zucchini and onions with some garlic. Got the zucchini brown, added in canned chopped tomatoes, making a tomato sauce. Tomato sauces are one of the best things to make if you’re cooking ahead of time, because they often improve their flavor sitting in the fridge a day or two. So many pasta sauces on Sunday for Monday night dinners---then all you have to do is cook the pasta and reheat the sauce. With fresh basil, always toss it in at the last minute and cook it for a second. I recommend making your life easier with fresh herbs by buying a pair of herb scissors, or folding the herb over and using a pair of real scissors to cut it up over the sauce. 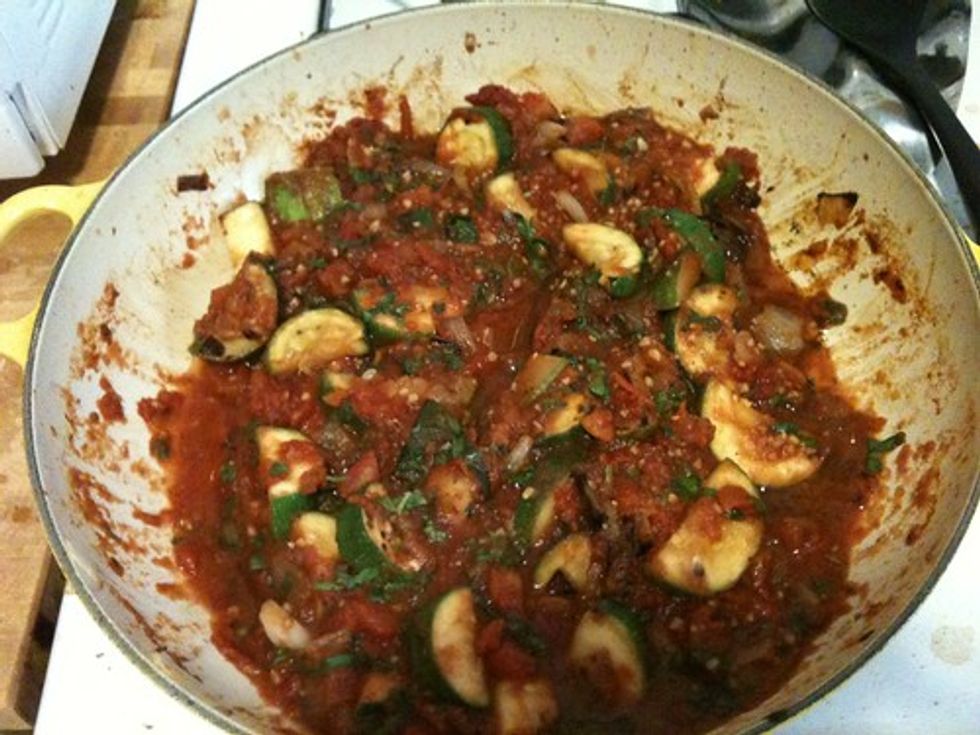 Time: 15 minutes, during which I got the dishes done, too.

I made the sauce Saturday morning (we went out to dinner Saturday night), which was good, because I needed something quick to throw together Sunday evening while I worked on the book salon at Firedoglake. So I was able just to boil some pasta and voila! Dinner. With more of the lettuce on the side with tomatoes for a salad. 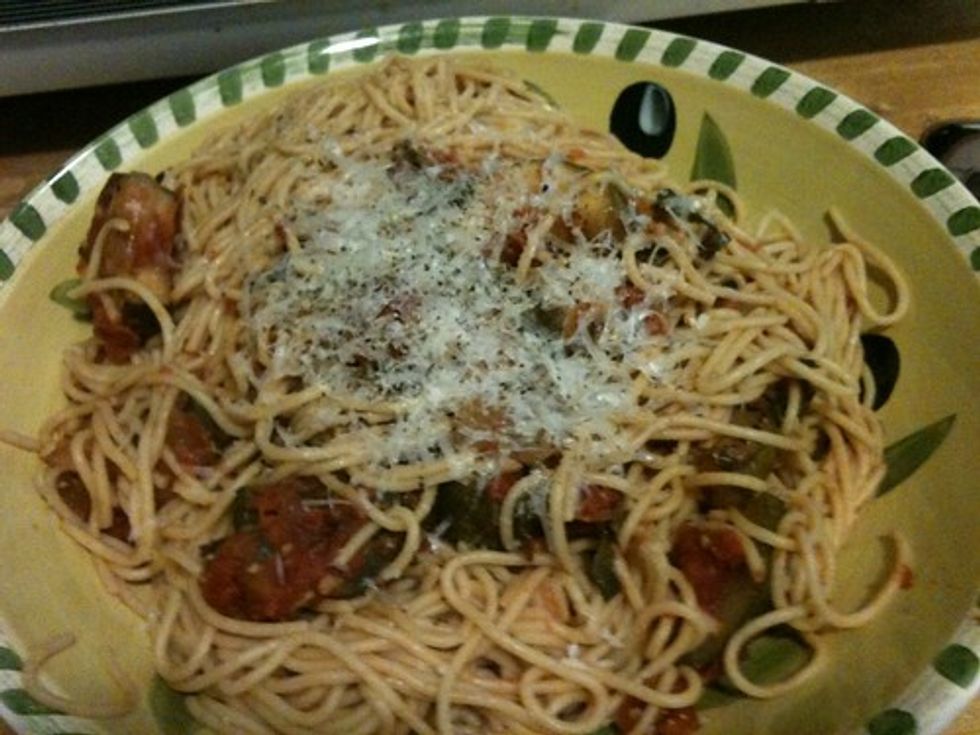 A note: I buy blocks of parmesan cheese and grate it over pasta and salads and whatever else with a microplane/zester. It takes like 2 seconds per dish, and it’s not only better tasting than the stuff in a can, it lasts many times longer. So it ends up being way cheaper.

I would have gotten two lunches out of this, but my clumsy ass dropped one serving on the floor. I lost a bowl and my pasta.

We ordered pizza on Monday, since it was Marc’s birthday. Tuesday, I was back to cooking. I only really had the beets left from the CSA, so I supplemented with a visit to the farmer’s market.

1) Zucchini is everywhere and ridiculously cheap, so I thought it would be fun to try my hand at one of my all time favorite foods, zucchini bread. I used the recipe from Simply Recipes. It was super easy, and took about an hour, with 50 minutes of that being baking. Served with fromage blanc and apple butter. 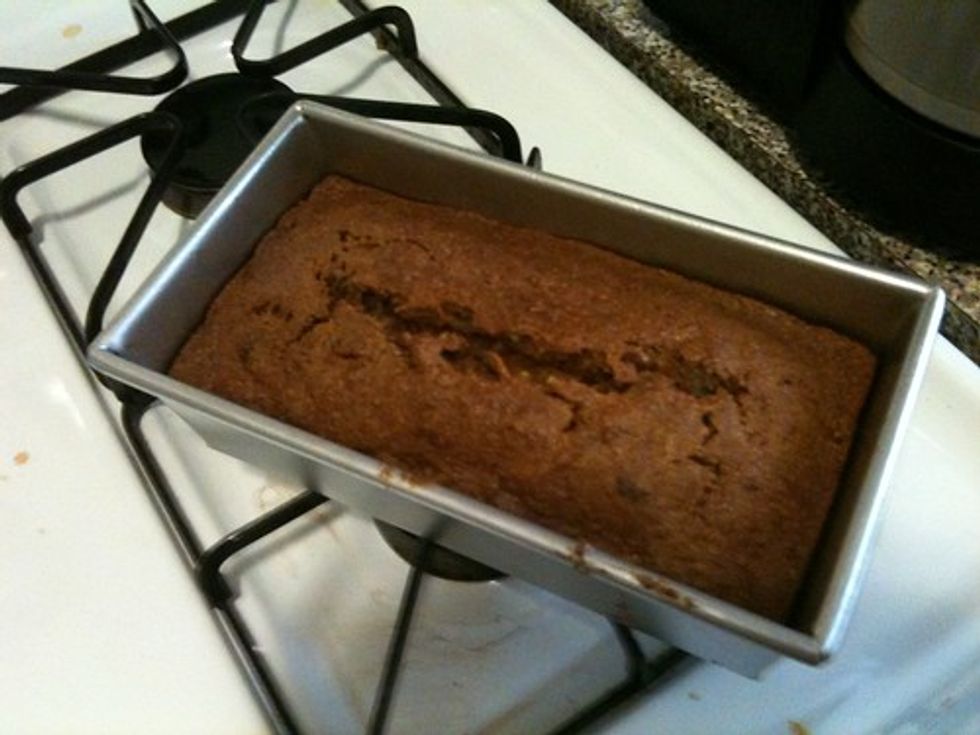 2) The grocery store had grape tomatoes on sale, so I bought some of those. I got something called “avocado squash” from the farmer’s market, so I just quickly browned all that with onions and parsley, throwing a little beer on to soften up the squash, since I had some left over in the fridge. Toss the tomatoes in at the last second, and only leave on long enough for them to get warm. And then, only go halfway, since they'll continue cooking a little after you turn off the flame. Salt, pepper, parmesan cheese. All of it was great, but the avocado squash was particularly amazing---nutty, rich-tasting. 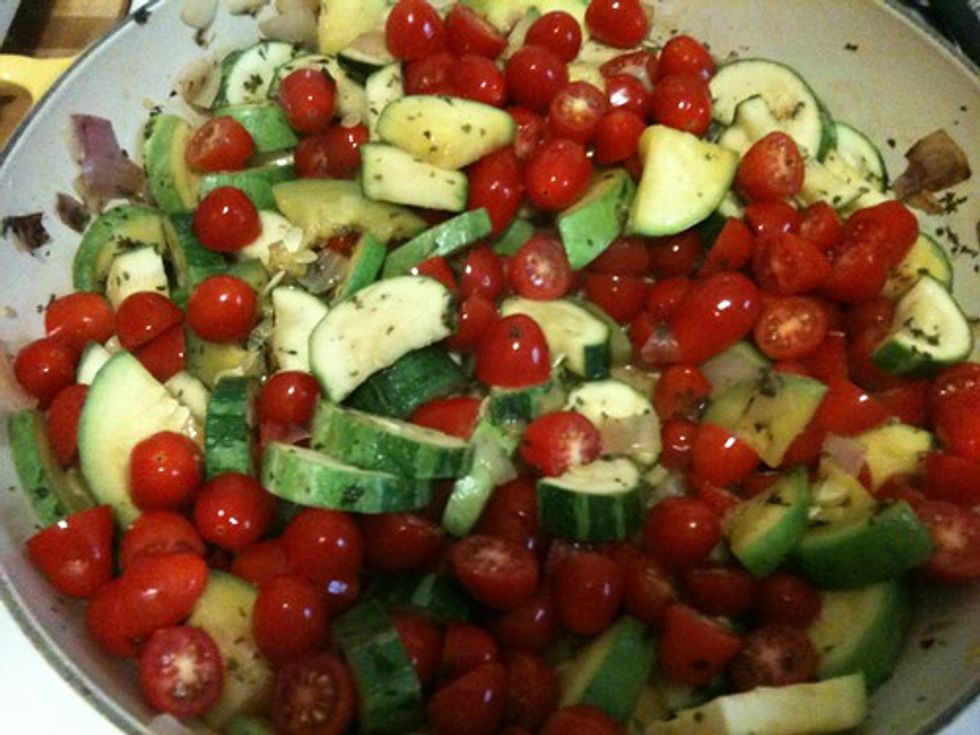 3) I roasted the beets earlier in the week, which basically consists of peeling them, wrapping them in foil, and putting them in the oven on 400 for 45 minutes or so, until they’re soft. I used Bittman’s beet gratin recipe, but didn’t do it the way he said, since presentation wasn’t a big deal. I just put some soft goat cheese, thyme and bread crumbs on top, microwaved it for a couple minutes, and stirred. Sorry the photo is blurry. 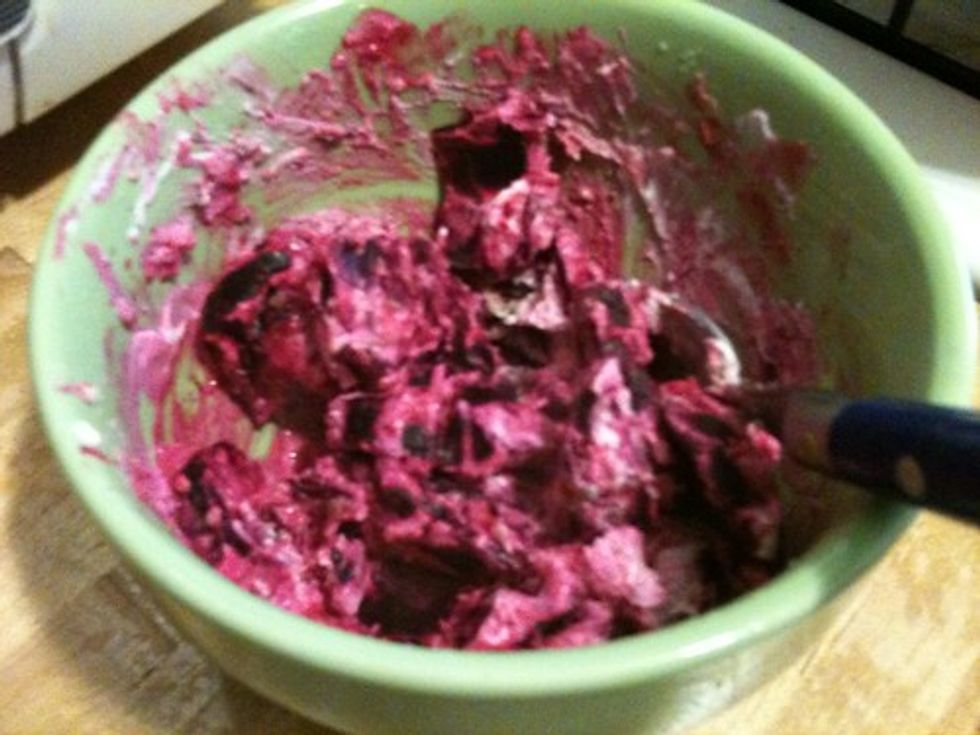 Time: 15 minutes for the squash and beets. 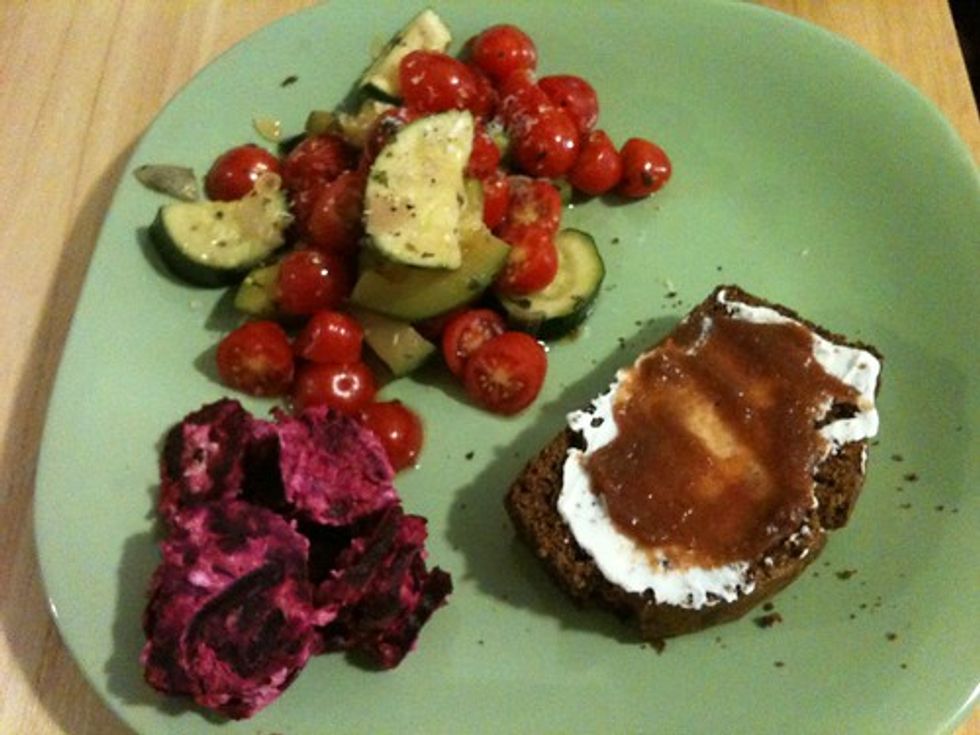 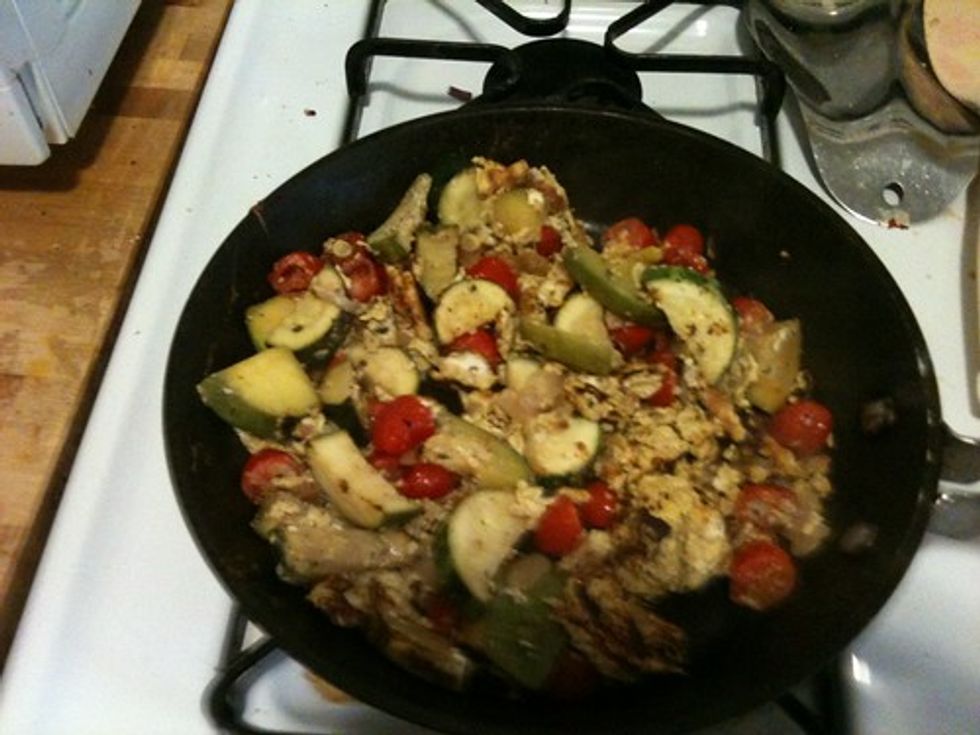 Prepping for the future

We spent a lot of time out of the house during the week for dinner, and I was really worried that a lot of the produce we had would go to waste. So I spent some spare time Friday evening prepping food for future consumption. It was particularly good for me, since I was having a stressful, headache-y day, and sometimes just hanging out cooking stuff is a good way to unwind mentally. Also, if you have a little time to do ingredient prep before you do something like go out on a Friday night for dinner, the next day you have easy to assemble food for things like lunch.

1) Didn’t want the basil to go bad, so I made some impromptu Thai-ish basil sauce---a jalepeno, a cup of veggie broth, an onion, some garlic, a little fish sauce and a little soy sauce. Browned the onion and garlic, tossed the rest in for a minute, then stored it in the fridge.

2) Cabbage speaks to me “fish tacos”, so I bought a catfish fillet. I went ahead and started the marinating of it, which is really the key to delicious fish tacos. I just cover the fish with some basic rub, some Goya lemon pepper, add garlic and jalepenos. Then, since we have so much beer, open a beer and cover it all. Cover, and back into the fridge.

3) One of my favorite things to do with cucumbers is make a kind of salsa. Two cucumbers, a jalapeño or two, one onion, a little lemon juice to preserve it, as many tomatoes as it takes, garlic, cilantro if you got it (I didn’t and used cumin instead), salt, pepper. Toss in food processor, blend. It’s not usually that spicy, but it’s an interesting, crisp flavor you can use on all sorts of things (like fish tacos).

4) Made a beet and cabbage salad from How To Cook Everything Vegetarian. This took the longest, since my ancient food processor doesn’t have the grating function anymore, and I had to hand grate the beets, and then chop everything else up. This ended up taking about 20 minutes.

Time: About an hour, including time to watch the Ghana/Uruguay game and clean up.

Oh man, the cabbage we got was so huge. I gave half my cabbage to Lindsay Beyerstein, and she gave me a vintage dress that was a little too big for her. There is still a lot of cabbage left. Tune in next week to see if I'm capable of handling it all, and to see if all this food prep was worth it.

A word on herbs

A lot more herbs than the food snobs will let on work fine dry: thyme, oregano, rosemary to name a few. One that I think you can't really skip as fresh is basil, though. But try not to buy it at the grocery store, where it's super expensive. If you have a cheap pot and some soil, grow your own. Just keep it well watered and in sun. Make sure it doesn't get pot bound. As long as you do this, it should grow like mad, and you'll have more than you could ever need. When you're cooking with it, just cut the tops off right at the joint, which will make it grow even more.