CSA Week #3: Zucchini, the food of the gods edition 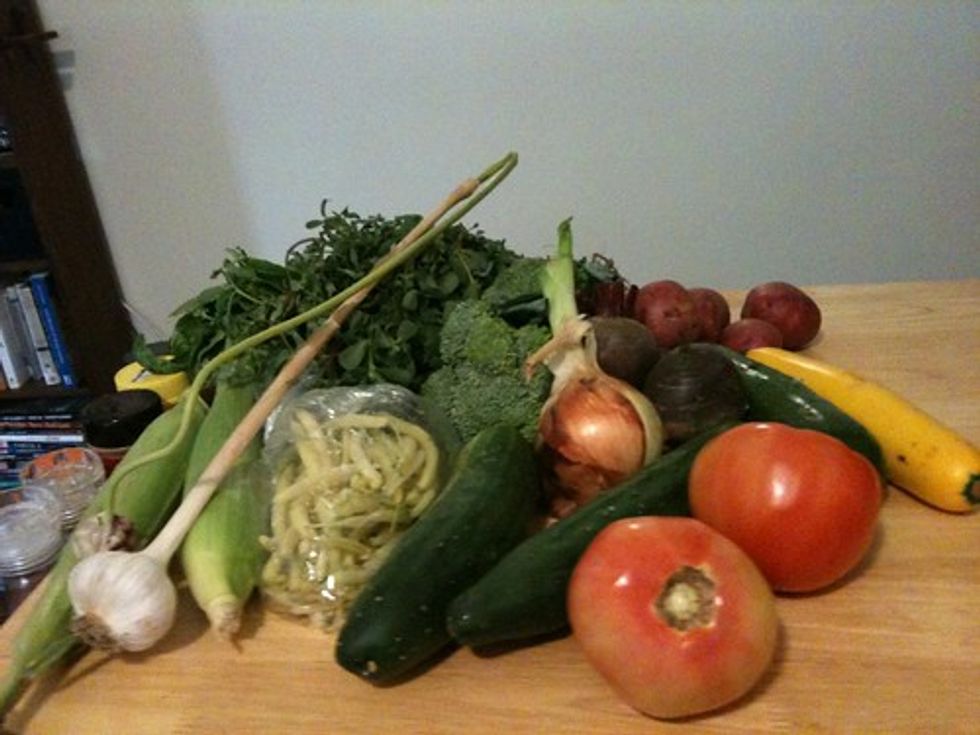 Let’s talk a little about leftovers. Some of us love them, and will happily reheat a plate from the night before for lunch, or even breakfast. Some of us seize up with dread at the very idea. Some us fall in between, depending on the dish. How to become someone who can eat leftovers, which is a practice that saves you money, encourages you to cook more, saves time, and means you’re that much less likely to use your lunch or even breakfast time eating less healthy food purchased from fast food joints?

Start by thinking of Thanksgiving. Everyone knows how to turn Thanksgiving dinner into leftovers, and there’s two reasons for it. One is there’s so much food that you kind of have to get creative. Two is you’ve made a bunch of simple, separate dishes that can be remade into different forms. The latter is what you want to look towards when cooking on a regular basis. Don’t mix all your food together---assemble only on the plate, and keep the leftovers in their own dishes in the fridge. This way, you can mix and match, making entirely new foods instead of just eating leftovers.

Back home, I knew a lot of women who would use Sunday to make a huge, elaborate piece of meat and some beans on the side, all to be reused in lunches and dinners for the rest of the week. Sunday roast could be eaten straight with beans and cornbread. Then it could be reworked in fajitas, sandwiches, omelets, you name it. Parts could be used for soup. Same with the beans. Vegetarians can apply the same principles.

For this, your best friends are simple carbohydrates and perhaps eggs. What was a simple dish last night can be eaten over toast or mixed into eggs for breakfast. (I do this with squash mixes all the time.) If you had a stir fry before, why not eat it the next day over pasta, instead? Stuff that’s a tad wet can be rolled up in a tortilla with beans, and stuff that runs dry can be the filling of a sandwich. Pasta sauces should be kept separate from the pasta and used later to flavor vegetables or even on sandwiches. Feel free to share your strategies in comments. 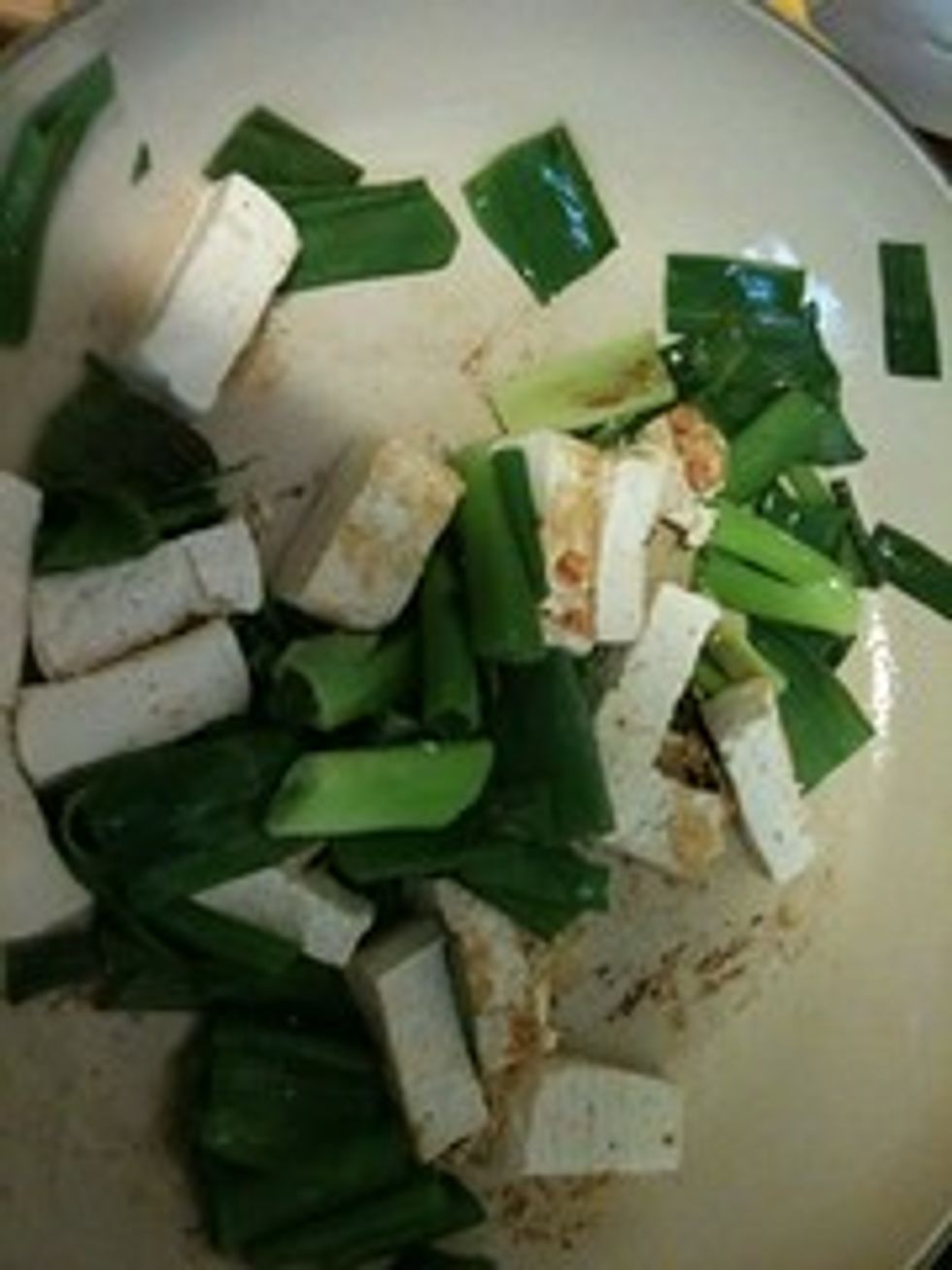 Didn’t have much besides World Cup going on Saturday, so thought it a good day to work through some of this food with a good stir fry. Before I went to the gym, I started pressing the tofu. When I came back, I started up the rice cooker, and showered. When I got out, I cooked the tofu (with some green onions), browning it a little first. In went some cabbage, the cauliflower, and the Thai-ish basil sauce I made the night before. Threw the green beans in last, cooked it just a little longer and then served it over rice. 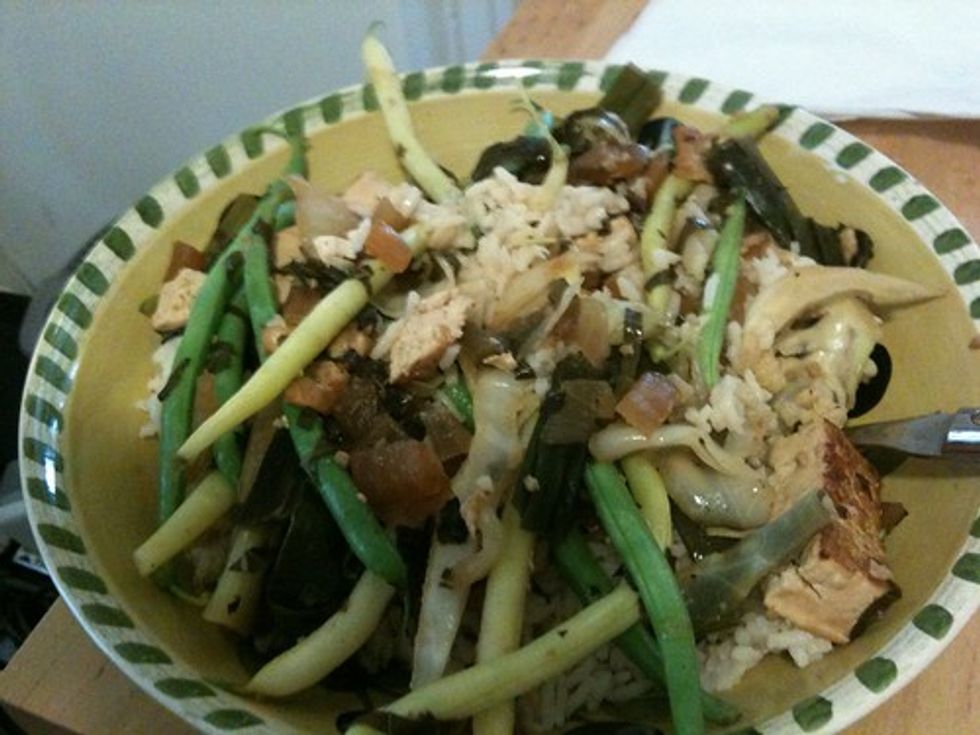 Time: Straight cooking and chopping, 15 minutes. Obviously, it works better if you just prep stuff ahead of time. Got most of the dishes done while it cooked.

Leftovers: This made basically three meals’ worth, so I was able to eat some for lunch later on.

1) Making beans on the weekend is one of those things everyone did back home in Texas, and it’s something I try to do because it’s a) tasty and b) a good source of protein. I just don’t make them with bacon. First thing in the morning, I started soaking a bag of pinto beans and a bag of black beans. Around 3PM, I drained them, rinsed them, put them back in the pot with water, salt, and some of those Goya flavor packets. Cook as normal. Towards the end of the cooking time, threw in onions, garlic, that green pepper, and cut some cilantro up in it. Served on the side. They were, may I say, fucking fantastic. The only thing that could have made them better perhaps was a bay leaf, but maybe not.

2) I bought some cilantro at the farmer’s market, and went ahead and mixed some into the cucumber salsa, as well as put it in the beans. 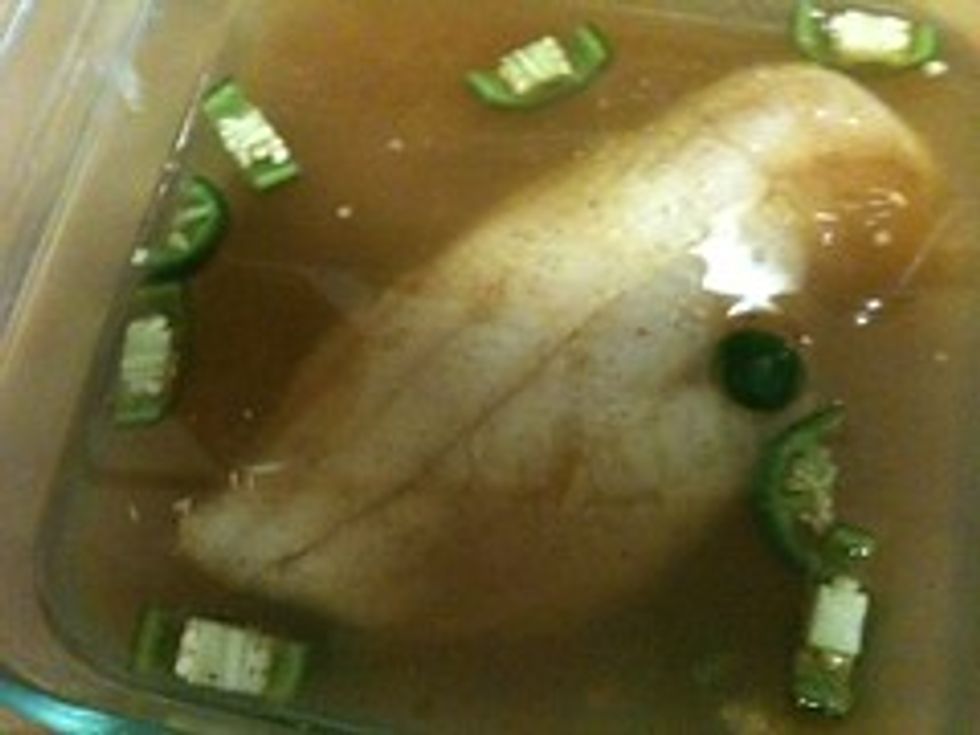 3) There’s only one real way to eat fish tacos in my mind---on corn tortillas, served with sour cream and not cheese. Despite the intense pressure exerted by Taco Bell, I’m not a big fan of frying corn tortillas, which makes them not taste like corn tortillas anymore. I just do them up like I do flour ones, putting them directly on the gas stove flame until warm. (My grandfather insists that the best was was how he was brought up in Mexico eating them---steamed. Again, I’m a little lazy for that.) I pan-fried the catfish I’d had marinating from the night before out of laziness and a small time crunch. That worked out fine. Served on corn tortillas, with tomatoes, salsa, cabbage, and sour cream. If you’re a n00b in the kitchen, fish tacos are often one of those dishes that impresses people far beyond the work that went into it.

4) The beet, orange, and cabbage salad I’d made the night before as a second side. So tasty! Well-played with the recipe, Bittman! 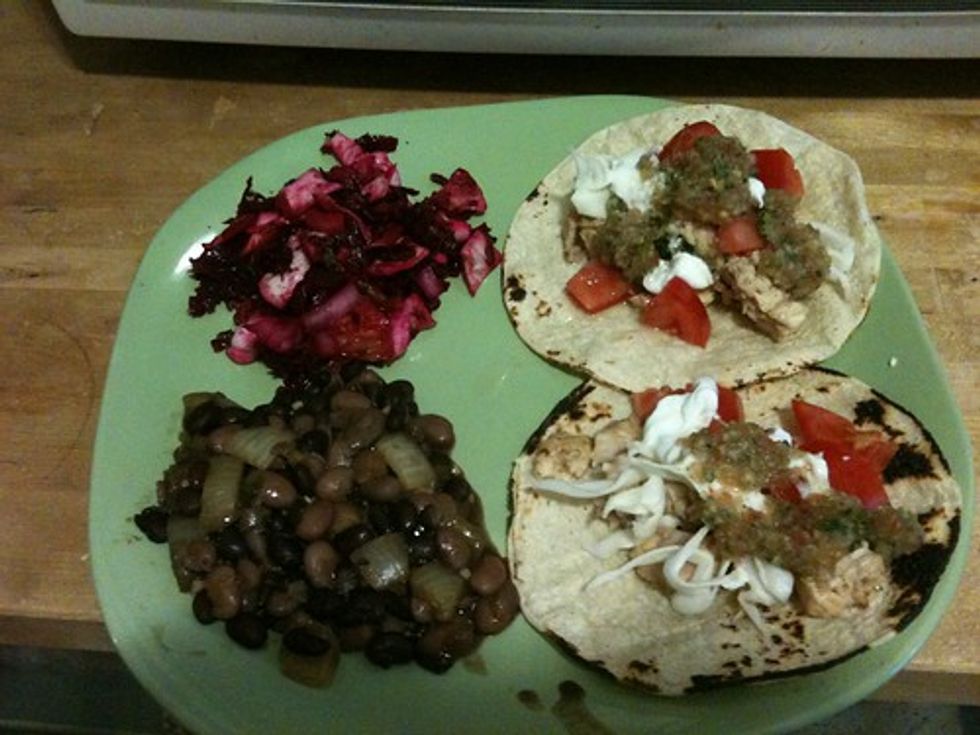 Time: Since I’d done so much prep, basically the time it took to cook the fish. Only a few minutes, basically. This is the ideal dish for everything to be out separately, and people assemble their own. You don’t want to make tacos until right before you eat them, because they have to be eaten quickly or they fall apart.

Leftovers: Beans, beans, beans. I made a fuck ton of beans. Marc had left a little bit of white rice and some bits of stir fry from lunch before wrapped in the fridge. I poured a spoonful of beans on that, nuked it and had it for breakfast, in a sort of impromptu black beans and rice thing. Tortillas turned beans into burritos for other meals.

1) Fourth of July, so I thought I’d try my hand at veggie burgers with one of my zucchinis. I used Bittman’s Midsummer Vegetable Burger recipe, which is basically corn, onion, and zucchini. The buns were from the farmer’s market, and I used goat cheese for the cheese. Plus, some of that salsa I had made, of which I have a ton. And, for the hell of it, basil leaves, which I have a ton of, and tomato, which goes without saying. 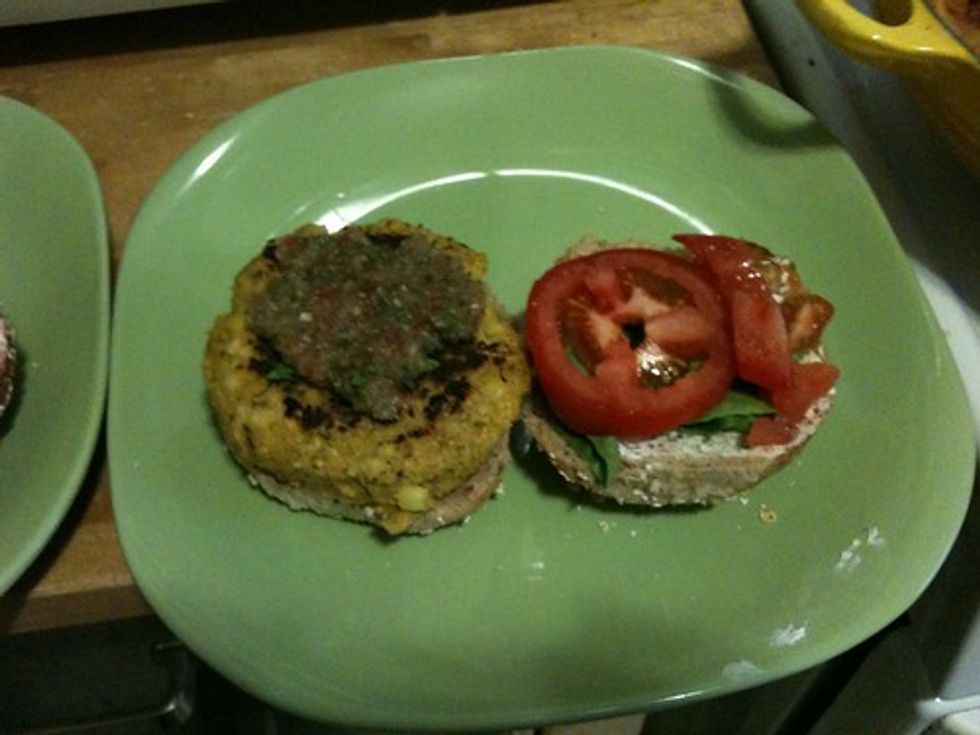 This is a good example of how to wash as you go---I had a pile of dirty dishes because of this, and since the recipe required having the burgers simply sit for about 10 minutes before being formed, I was able to wash all the dishes, start the chopping for the next item, and type this up.

2) Bittman (told you his book was awesome!) had a really simple cabbage recipe that promised to use a bunch of the cabbage. I would have used one of yours, but I already got the ingredients for this one, but it was similar---cumin, stir fry it, etc. It just included tomatoes and sour cream.

3) Nuked some of the beans from yesterday, served as a side. 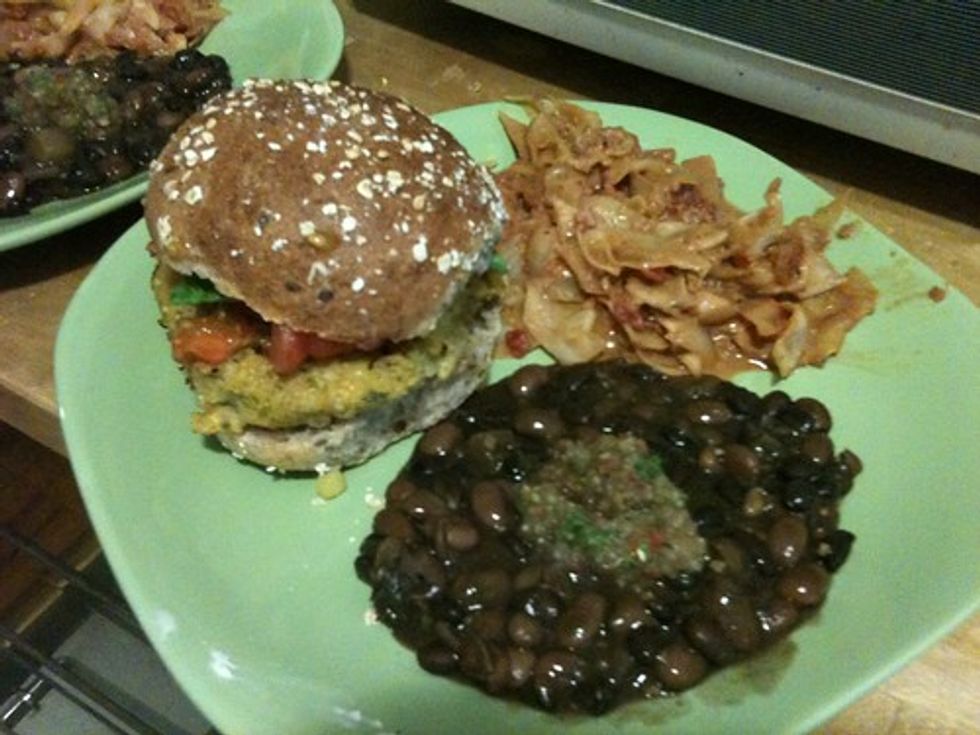 Time: Over an hour, but it was a good day for it, since it was a holiday and I didn’t have much else to do.

Leftovers: The cabbage mix was surprisingly tasty on a tortilla with beans and the salsa. There were two veggie burgers that became two lunches.

For the hell of it: I had one zucchini left, so I made zucchini bread again, guessing it would go well with the raspberries I picked up from the farmer’s market on a whim.

Dinner #3, after a new CSA shipment

1) I’ve been drawn to using green beans in recipes where they’re barely cooked at all, but I thought I’d try something new, and went with Bittman’s recipe for slow-cooked green beans. His was simple---water, beans, tomatoes, onion. I added some of the basil.

2) I have a ton of lentils in my cabinet, so I decided to cook them with the potatoes. Added a bunch of different stuff like cumin and tumeric, as well as some onion and garlic.

3) Zucchini bread! I love it and eat a lot of it! Seriously, in this heat, it’s actually more tempting than usual to have a little sweet on the plate to offset everything else. “Little” is the key. Zucchini bread isn’t sweet like cake, but it’s sweet enough. 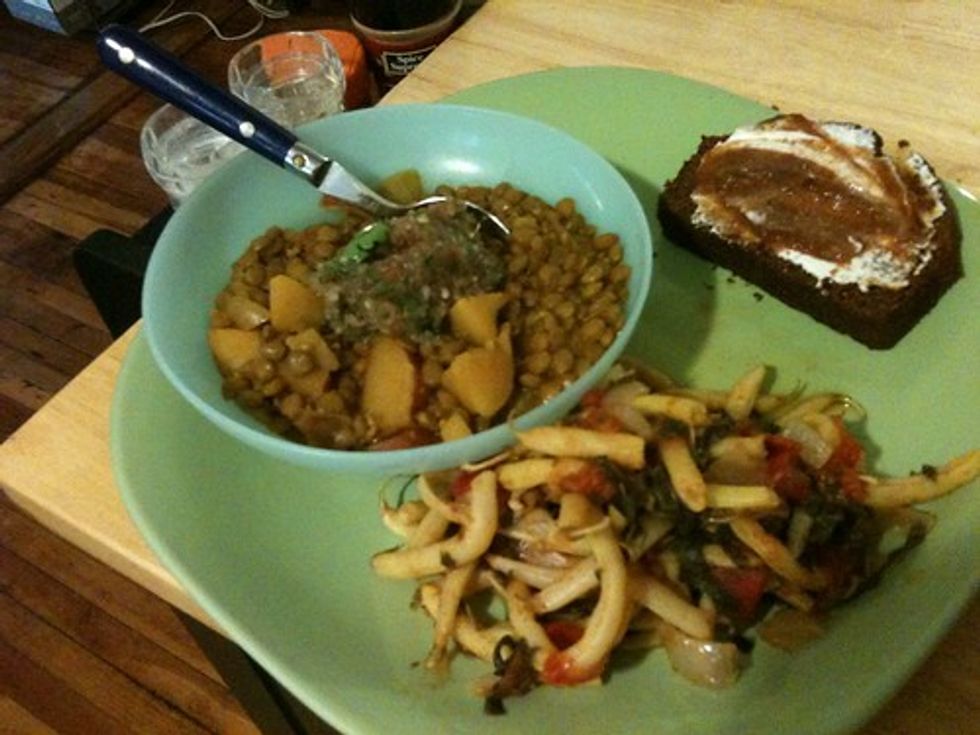 Time: A little over an hour, but most of it was just stuff sitting in pots, cooking. It was actually a pretty lazy dinner.

Leftovers: There were lots of lentils and potatoes left for breakfast and lunches.

Prepping for the future

1) Audio editing is a lot of sitting around and listening, and so I like to keep my hands busy with chores. Purslane is kind of an interesting, unusual herb/vegetable, so I decided just to go straight ahead and make yogurt sauce with it. I chopped it up with the herb scissors, mixed it with yogurt, a little minced garlic, some lemon juice, and salt and pepper. You can do this with pretty much any weird herb and it usually works great as a dressing for all sorts of stuff. Since it had a cactus-y taste to it, I added chili powder and cumin. 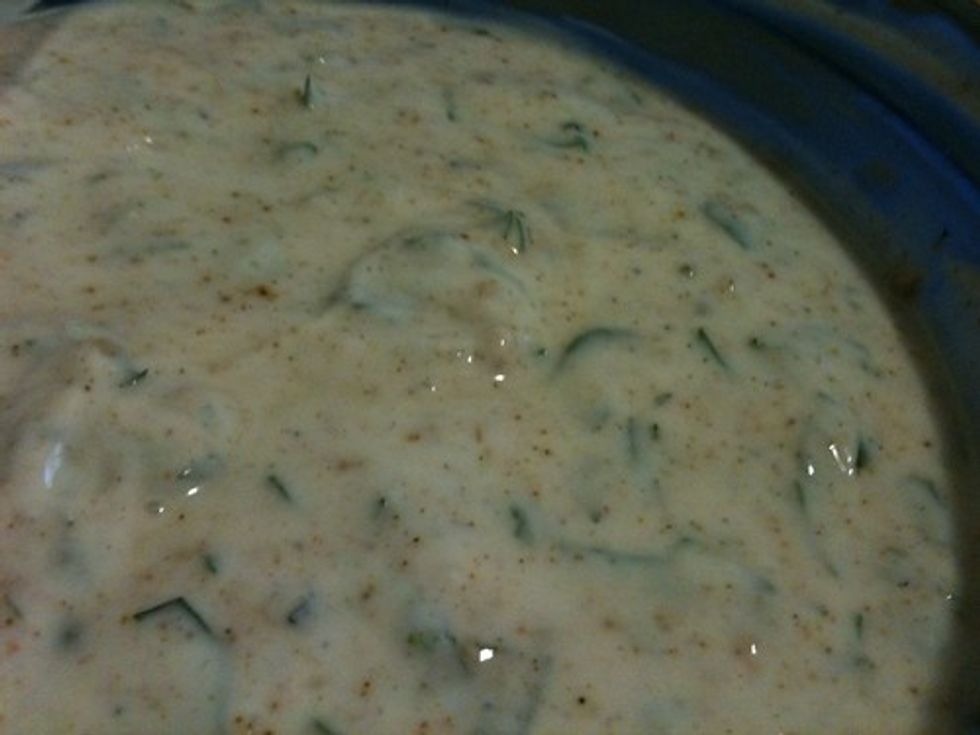 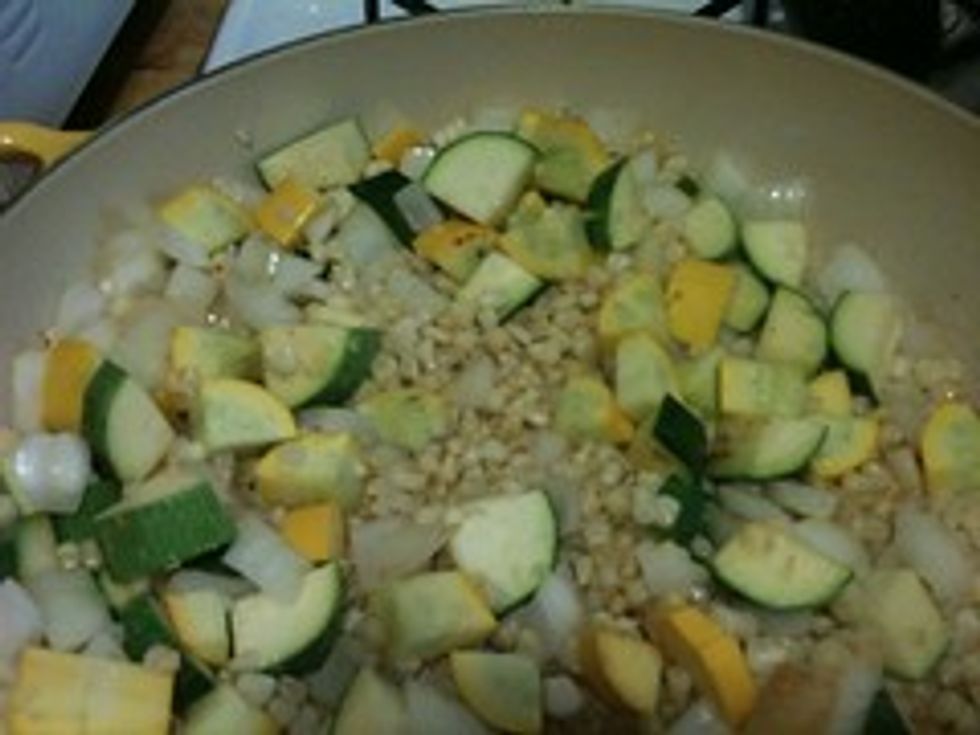 Used the Bittman iPhone app and searched for “tarragon”, since I had some left that I didn’t want to go bad. Voila! He had a recipe for a pasta that used the herb with tomatoes, corn, and zucchini---I got exactly those veggies in my CSA! I browned the zucchini, corn, and onion, threw in some garlic, tossed the tomatoes and the tarragon in at the last minute. (Thank god for those herb scissors.) No need to make a bunch of different dishes. Pasta tends to stand on its own. In fact, I think the whole point of summer is to eat lots of pasta with vegetables. Salt, pepper, a little grated Parmesan, and good to go. 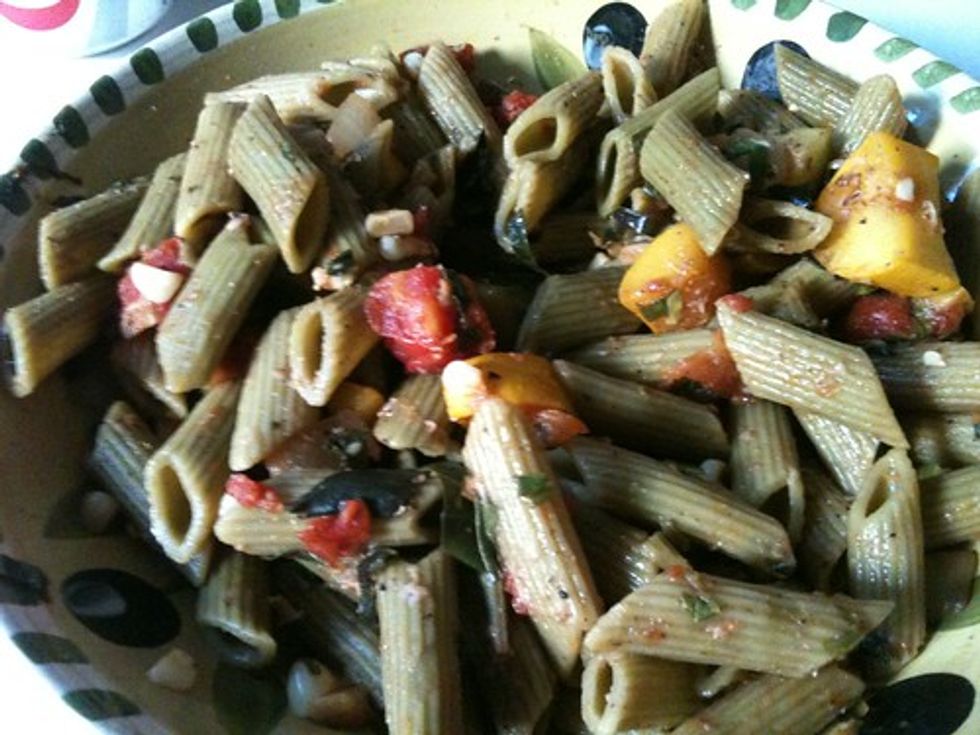 Took the advice from previous threads and used the scraps from all these vegetables, which I’d been storing in the freezer, to make vegetable broth. I stored it in a beer growler, so that I could use it as I needed it.

The broccoli was looking sad, so I chopped off the florets and made eggs with them. It ended up being more veggie than egg, but that's how I like it. Ate it with toast and some of that yogurt sauce I made with the purslane. 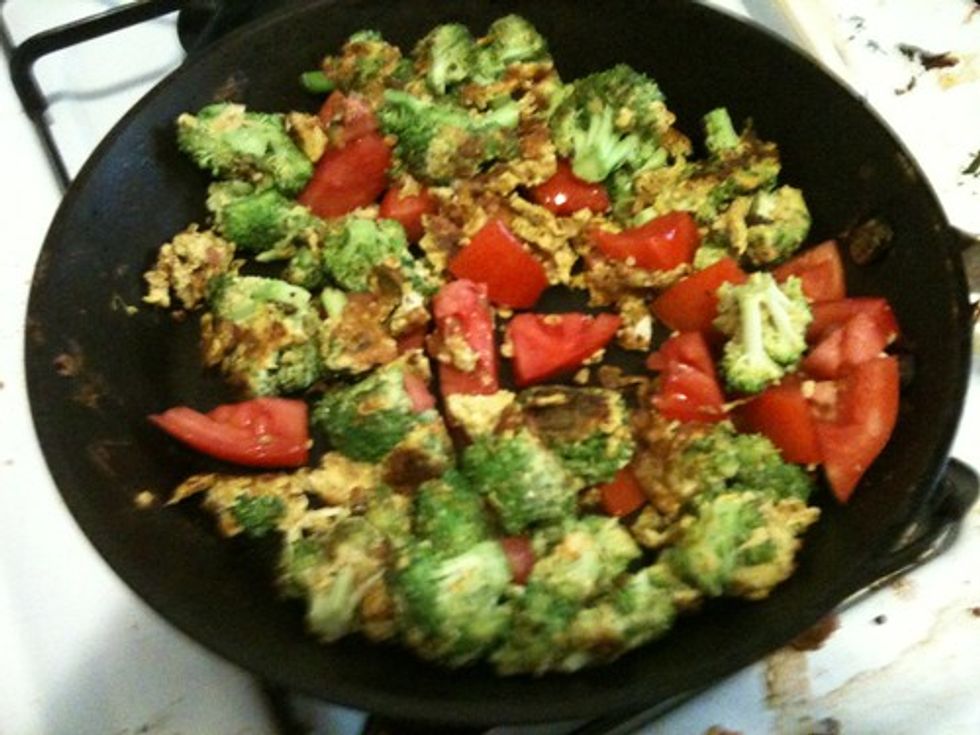