Hey, why aren't there any broads in this joint? 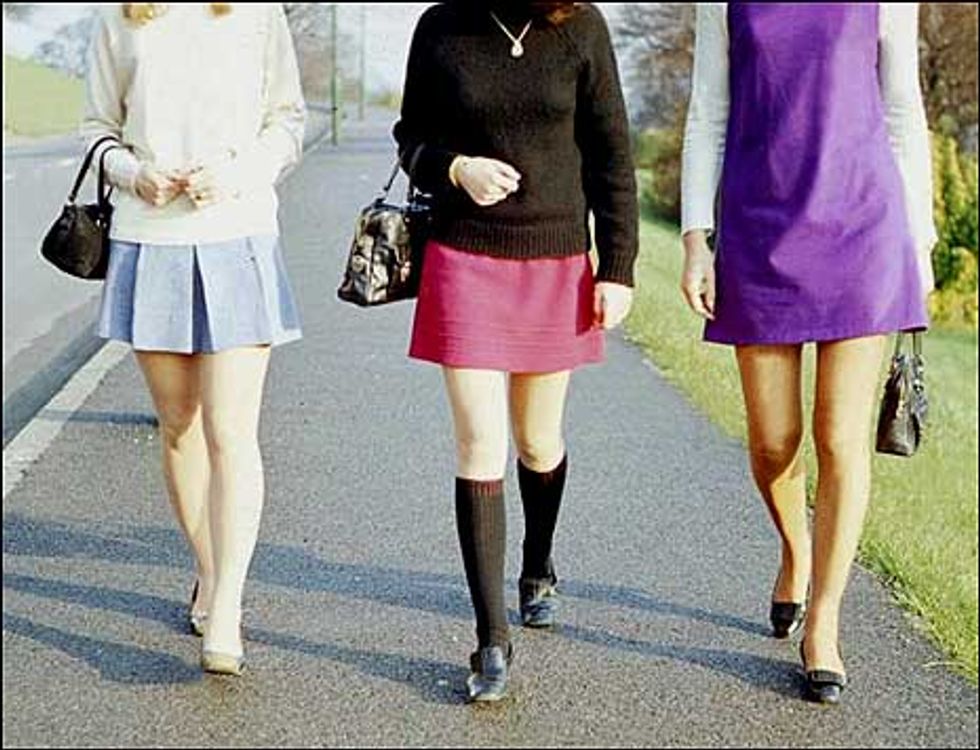 I'd like to compare and contrast two approaches to the perennial problem of under-representation of women and the undervaluing of women's voices, even and especially by well-meaning people. Goofus reacts, when accused of not having enough female talent in the writer's room and on-air, by beefing up your numbers of women by pointing to women that do jobs such as operate the teleprompter, work as production assistants, or do hair and make-up (as well as a handful of women who do have the kind of jobs in question). When I criticize this, I get accused of claiming that it's not great that make-up artists do make-up work, so I want to be 100% clear---I'm sure the teleprompter operator and make-up artists love their jobs. No one is suggesting that "The Daily Show" discriminates against women when hiring production assistants, producers, make-up artists, or even tech jobs. That accusation was never made. But when the accusation is that you don't hire women for writing jobs and on-air jobs, the existence of female production assistants is irrelevant and condescending to boot. The fictional Sterling Cooper's office is like 60% female and they even have a female copywriter, but that doesn't mean that they've got equality, so move along now.

Here's the Gallant reaction to the problem of, again, well-meaning people who nonetheless have the problem of female under-representation. The question at hand is how male-heavy the atheist/skepticism movement is, and what to do about that. PZ, with his usual good humor, says this:

I was thinking about this because I was reading Skeptifem's take on the absence of female skeptics, and my first reaction was that it was pretty good, but I had some little disagreements here and there where I thought I could put together a quick blog post with plusses and minuses listed…but then I realized that these are the problems she honestly sees. These are real obstacles in both perception and reality, not an academic exercise. Shut up and listen, I told myself.

So I'm going to try something a little different. Instead of telling you my opinion, I'm going to forgo the essential principle of blogging (which is "Me! Me!") and just ask people, especially women, to leave links to their godless/skeptical feminist blog or make suggestions or gripe or tell me what these stupid male-dominated conventions have to do to correct the imbalance.

I'm not particularly averse to men piping in with ideas on how to overcome the problem of male-dominated spaces like atheist conventions or comedy writing rooms, but I do think that PZ has a point here about some of the traps that dudes can step into. I remember the good ol' days (okay, not so good in this case) when pretty much all the top liberal bloggers were dudes, except one lady that everyone thought was a dude. And occasionally male bloggers would write the ever-annoying "Where all the woman bloggers?" post (and it was always "woman bloggers", a phrasing that annoys me---why is it so hard to use "female" as an adjective and "woman" as a noun?), and they'd theorize that the problem was mainly with women, who were deemed less ambitious and willing to take on the rough and tumble than men. This, naturally, would piss the actual female bloggers that actually existed off, because we don't like being told a) we don't exist just because you don't read us and b) that we're weak people.

Eventually, after some real heartache, the problem was actually dealt with in substantial ways. And I think everyone can actually learn something from the experience, and the main lesson is that it's important to take women seriously. This sounds simple on paper, but in reality, I think there's a few things that men have to grapple with that aren't that easy at first, but do get easier with practice. Some things I've learned help a lot:

1) Avoid ghettoizing. This is really complex, and so I really do get that it takes practice. But what this means is that you shouldn't set aside entire lines of discourse as somehow Dudely Topics that women can't participate in, nor should you treat "women's issues" as second tier issues. Women are going to have, for obvious reasons, interest in things that affect them more than men, like reproductive rights and pay inequality. (Though I think if men stop being nervous around these issues, they start to see how they affect them, too.) But that women may pay more attention to, say, abortion rights doesn't mean they don't have something to say about the economy. Don't only call on women when the issue is uterus-based. But don't ignore the uterus-based issues. Strive to avoid being nervous about topics like sexism and sexual health issues. I've seen tremendous progress in this direction in the past few years in the netroots. Really, it's just super, and I think a lot of female bloggers can attest to feeling like their opinion matters on "traditional" political matters, but also that they don't have to censor themselves on the subject of sexism in order to be taken seriously.

For atheists and skeptics, as well as the world of comedy, I think there's a lot to be learned here. Strive to create a space where women don't feel they have to leave their identity as women or as atheist/skeptics at the door in order to participate. They have more to speak on than just being female, but they also have interesting things to say about being female. Both/and.

2) There is nothing wrong with wanting to increase your pleasurable heterosexual encounters, from flirting to intercourse, but it's probably best not to make that a central question when talking about why it's important to bring more women on board. This should go without saying, but sadly, it has to be said. You may think it's welcoming to joke about how you want more women around for the aesthetic pleasure it brings you, but when you say this, women believe that you don't actually want them around, but may in fact be happy with a computer-generated image that dresses well and knows how to smile and giggle on cue. Flirting is fun, but it works best for women if they feel truly welcome and wanted, not like they're crashing the dude party. I will single out "The Daily Show" as being real champs at this, historically speaking, which is why there was legitimate sadness that someone's hawtness is in play in hiring decisions. Even with the numbers skewing male, "The Daily Show" has always felt like a place where women come on and everyone can actually hear what they're saying instead of pointedly looking at their ass. But there's always a lurking suspicion that women do better if they take some clothes off or make a fuss over putting things in their mouths, and it's probably best not to reinforce that legitimate fear.

And never, ever, ever, use language that implies that "women" are mutually exclusive from the group that's trying to be more egalitarian, be it "comedy writers", "atheists/skeptics", or "bloggers". This seems like a rookie mistake, but it does come up.

3) Recruiting. This is a tough one to wrap your heads around, because it seems like it should be enough to create equal-seeming opportunities by simply stopping the unintentionally discriminatory practices. You may feel recruiting is a different version of the sexist argument that women don't do X because they're not ambitious enough or don't care or whatever. But in reality, recruiting can be super-effective, because it's acknowledging that every step you took to get here mattered, and that women didn't have that pathway available most of the time, so they need a different path.

A lot of women look at group X---atheist/skeptical leaders, comedy writers, major liberal bloggers---and think, "Man, I could totally do that job." And they could! But they don't apply, because there's no application process. The men who do this usually stepped on the path years ago, and for various complex reasons, that path had a No Girls Allowed sign hanging over it back then. And every step the dudes took down that path, women had to go on another, often taking them further and further away from the men's path. So by the time the sign is taken off the door, women don't even know where to find the door. So you're going to have to go find them and give them a ride.

This sucks, because who doesn't hate giving rides? But the benefits are way worth it, because not only is male dominance bad for women, it's really not so great for men, and not just because of the previous bullet point. Bringing women in doubles your talent pool, brings a new kind of energy and diversity, expands your reach. When women see other women doing these things, they start to think it's possible for themselves---it only took a handful of women joining the ranks of the top bloggers, and the floodgates opened, for instance.

But to make it work, you have to get out of the urge to ghettoize, either by only looking for women that fit the standard male mode but just happen to have vaginas, or by only hiring women that only do girl things. Include women who may do things a little differently than your usual ways, and suddenly you'll find the ranks of potential women to bring on board opens way up. For instance, once the big liberal blogs stopped seeing feminism as a scary topic to only touch on occasionally, they found that it was way, way, way easier to bring in women. By allowing more discussion of feminism, they found that they got what they wanted---women blogging about economics, foreign policy, electoral politics, etc. Meeting women where they're at instead of shoving them in boxes will work for you and for them.

Those are the biggies that I see, but hope other people have good suggestions for truly making women feel more welcome in traditionally male-dominated spaces.