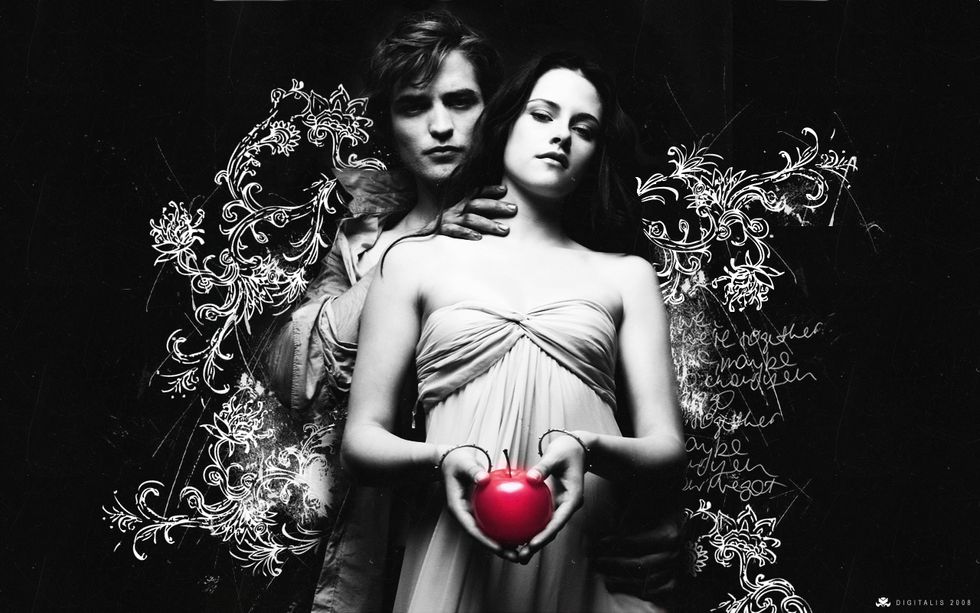 You know what I really, really don't get? The whole Twilight thing. I just don't get it. I mean, I analyze and observe it like a good feminist critic of pop culture, but on the most basic, gut level, I just don't get why it's appealing to anyone, much less some big blockbuster hit. It just sounds so reprehensibly, tediously, unbelievably anti-feminist that I can't see why any tween---much less a teenager or a grown woman---would get into it. I'm wracking my brain and trying to think of what we had when I was that middle school age bracket that's even remotely comparable, and nothing comes to mind. There was New Kids on the Block and Johnny Depp to provide images of "safe" young men to crush on, but while that was all very corny, there wasn't anything close to the hyper-patriarchal "getting married at 18 to a guy who stalks you!" kind of thing going on there. When I went to high school, there certainly wasn't anything of this nature even close to my radar. Then again, my teenage years were, in retrospect, a startlingly feminist time in terms of pop culture. You wouldn't really see, for instance, a band like L7 get the kind of promotion to teenage audiences that they got back then.

We're in the midst of some kind of anti-feminist backlash and at the hopefully tail end of a surge of evangelical Christian power, and so I get that pop culture is probably going to reflect that to a degree. But at the end of the day, I don't understand why young women and girls not only enjoy being insulted like this series insults them, but why they eat it up. Garland Grey watched the latest movie in the series, and this is his takeaway:

I would say I’m Team Jacob, but both of them are just such colossal assholes. So little of this movie is Bella telling them about what she wants, and so much of it is the two of them talking about her like she’s not STANDING RIGHT THERE. In one scene, Bella makes it extremely clear: she does not want to bump werewolf uglies with Jacob. He kisses her anyway. She punches him, but BOW she almost breaks her hand. (In the book she apparently does break her hand. I say apparently because I never finished any of the books.) I guess the verdict is in: don’t fight back ladies, it won’t do a damn bit of good.

The Twilight Series has always been a warped, frightening prism through which we are encouraged to view the power dynamics of modern relationships. Bella meets Edward, a possessive man who scares her and invades her personal space, and she cannot swoon fast enough. This teaches young women to ignore the signs that their relationships are abusive and glorifies a pernicious form of Stockholm Syndrome, which society calls The Good, Faithful Woman. For only The Good, Faithful Woman can find TRUE LOVE. What is True Love? Well, you can’t control it, it consumes you totally, and once you’re in it, there is no escape.

I've had people explain that young women eat up the fantasy of having a guy that wants you and only you so badly, which is a fantasy that particularly resonates with young women who find themselves in a sea of young men who are afraid to be too nice to a girl they're dating, lest everyone thinks they're gay. But this shit is so over the top that it seems like it would embarrass young women, and I have to wonder if they just make 'em a little more earnest and harder to shame nowadays. Humiliation aside, I'm truly and completely amazed that fans don't balk at obviously fucked-up messages like the whole get-married-for-eternity-at-18 thing. Or the way the books positively glorify completely subsuming your identity in a man. When I was a kid, plucky heroines who were wholly themselves captured our imaginations, which is why Judy Blume was able to make so much money off us. Why are girls so different now?

I finally got some insight on this from Tanya Erzen, who I had the pleasure of interviewing today for an upcoming podcast, and who wrote an excellent analysis of the fan relationship to Twilight recently. In her piece, she describes how the fans really get off on the juxtaposition of the banality of Bella's life playing the role of the housewife for her father after her mother left and her exciting life with the vampires and werewolves, one that is still patriarchal as all hell, but at least not boring. And she winds up with this:

The enchantment of Twilight doesn’t reside in Edward’s proclamations of love but the other dazzling possibilities in the text: the vampires don’t eat actual food so Bella is liberated from ever having to cook a meal once she becomes immortal. She eventually lives as part of an extended clan of Cullen vampires who are always on call to babysit and provide free daycare. Sex is always awesome. And then there is immortality itself.

Tanya assured me during the interview (stay tuned in to future podcasts!) that she doesn't think the fans really think about it on this level. And she would know, since she's interviewed thousands of them. But that said, I think she's on to something here---feminists look at the patriarchy that Twilight serves up and we wrinkle our noses in disdain. But it's still absolutely a more fun and exciting form of patriarchy than the one where you don't have awesome sex and have to cook all the time, and there's never any exciting adventures at all. Being the passive victim of exciting adventures is better than being the passive victim of your boring ass ordinary life. And I realized, with sudden sadness, that basically that's the appeal. It's not like most of the fans are living some great, empowered lives that make the Twilight fantasies look like a nightmare. Despite the gains of feminism, most women still have lives that involve a lot of shit work done for ungrateful family members, a sex life where your desires and needs are considered secondary if considered at all, and lots of boredom. For them, the fantasy of a choice between two patriarchies resonates. Maybe for many, it's because the fantasy of something outside of the patriarchy is too far out of reach to be a fun fantasy, but instead is just depressing. We are, after all, living in a backlash time where we're being asked to take seriously the proposition that Sarah Palin is a feminist. A little subconscious fatalism is perfectly understandable in this environment.