Yesterday I posted about WorldNetDaily's Joseph Farah blasting Ann Coulter's "betrayal" of him regarding the anti-gay "culture wars" by keynoting GOProud's HOMOCON. You could almost feel Farah's raging on the keyboard at other luminaries of the right who are also abandoning the professional anti-gay agenda:

..."Conservative" icon Glenn Beck, in a conversation with Bill O'Reilly, said basically he doesn't care about the attack on traditional marriage. Asked if the California ruling will harm the country in any way, he responded: "No I don't. Will the gays come and get us? I believe that Thomas Jefferson said: 'If it neither breaks my leg nor picks my pocket what difference is it to me?'"

Rush Limbaugh, the iconic leader of American conservatism, hired the noted homosexual singer Elton John to perform at his wedding. He has not aired one of his bitingly satirical "gay community updates" in years.

"Conservatives," it seems, are on the verge of not only accepting homosexuality's domination of the culture, but embracing it. 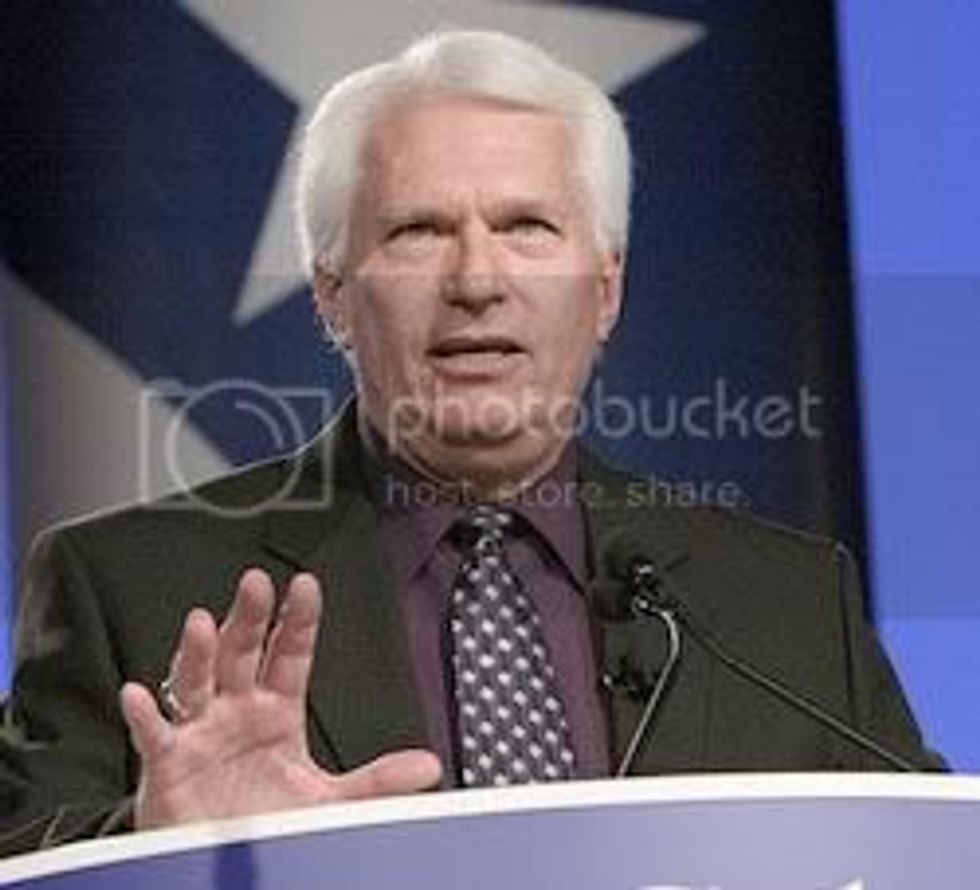 We can now add Bryan Fischer to the far-right public meltdown. He's the host of the "Focal Point" radio program on the American Family Radio talk network (one of the arms of Don and Tim Wildmon's American Family Association). This is a man who actually said that society must "put active homosexuals through an effective reparative therapy program."

Look at this crazed column, "Coulter, Beck go AWOL in culture war." The anger-generated spittle is dripping onto his keyboard.

Count Ann Coulter and Glenn Beck as the latest deserters in the culture war and in the battle for sexual normalcy. They have flinched at "precisely that little point which the world and the devil are … attacking," and so have forfeited the right to consider themselves any longer culture warriors.

You [Ann Coulter] will be received with a standing ovation [at HOMOCON] for pandering to a group that wants to put open homosexuals in the same showers and barracks with sexually normal soldiers (priority No. 4) and is fiercely opposed to any attempt to elevate protection for natural marriage to the Constitution (priority No. 7 – see GOProud website).

...Glenn Beck has completely and shamelessly surrendered on the issue of gay marriage, and did so on Bill O'Reilly's program, only the most-watched cable news program in all TV land...Even O'Reilly, who is a notorious squish on the subject of the acceptability of homosexual behavior, was taken aback by Beck's capitulation and rightly accused him of "ignoring the profound change in the American family."

Folks, we are starting to see real damage to core of the professional homo-hate machine. The fiscal conservative/libertarian lite wing of the GOP, as well as those like Beck and Coulter, who depended on that demo for their meal ticket in the past, sees the legal handwriting on the wall for the social conservatives (aka loonies) and are publicly making a break for the door to more credibility), with the alignment now toward the burgeoning Tea Party wing.

It's pretty clear that a corner has been turned, with the green light foor Beck and Coulter likely being the 138-page Prop 8 legal ruling by U.S. District Court Judge Vaughn Walker that decimated the pathetic case presented by the defenders of marriage discrimination. The sorry-ass, religious, culture, and bias-based excuses to prevent opening civil marriage to lesbians and gays couldn't stand up to the reality-based legal standard, as Olsen and Boies smacked down the so-called "experts" who bothered to show up to testify. Just a peek at Walker's Findings of Fact alone put those ridiculous arguments completely to bed.

Beck and Coulter, who are thinking about their professional bottom lines, are placing their bets on the legal wind blowing away from the bible-beating theocrat wing of conservatism.

Again, while I can't always agree with their political positions on issues, credit also has to go to GOProud, which has managed to become a deeply lodged splinter into the social conservative movement in a very short time (the LCR was never this effective). It was first an irritation, and now it's making the bible-beaters hurt badly if they are taking this infighting public over HOMOCON. Makes we wish I could get up there to cover the event, which is on September 25 in NYC.

GOProud's Chris Barron recently took The Peter to task over his expected eruption over Coulter's gig:

“I strongly encourage Mr LaBarbera to head out to his local bookstore, buy an Ann Coulter book and actually read it. For a guy who claims to be a “fan,” he seems completely clueless about what Ann has actually written and said about gay people and gay conservatives.

If Mr. LaBarbera spent less time obsessing about gay sex and hanging out at gay Pride events, maybe he would have a little more time to read one of Ann’s books.”