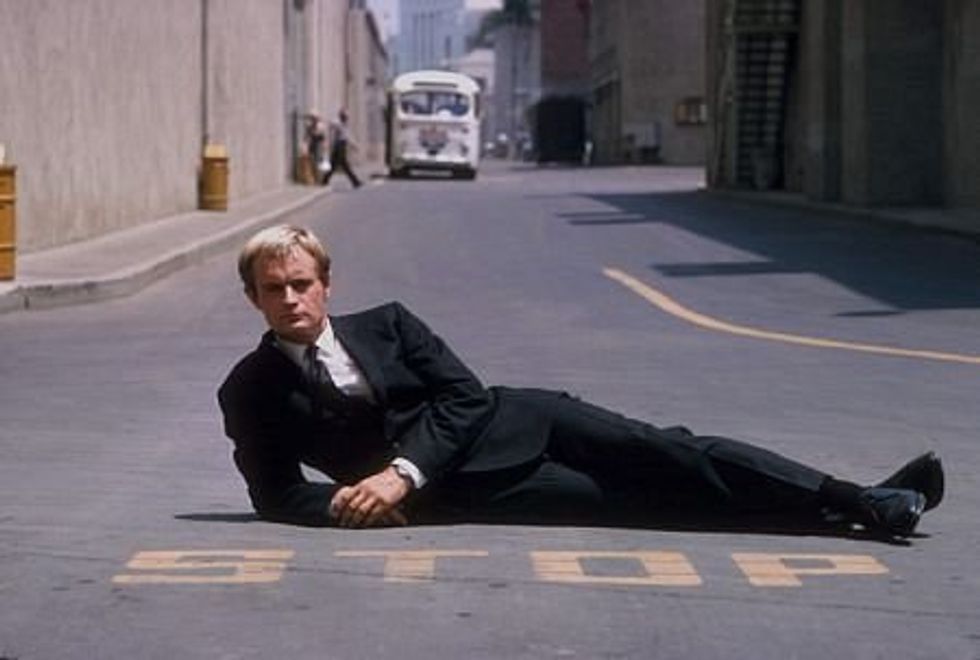 For reading on the show that drove Sally to want to experiment a little with herself, check this post out.

In many ways, this felt like an episode that was just moving forward the plot, though, as usual, it was stuffed to the gills with surprises. Nonetheless, I really enjoyed this episode. Watching Don slowly self-destruct was threatening to get repetitive. Seeing him really come out of his alcoholic stupor for a little while to do good work is fun. I have a real weak spot for portrayals of competence and glorying in a job well done. Hollywood has a tendency to think that characters that are too masterful lose some of the audience's sympathies, but I find that the characters on "Mad Men" are just more fun to watch if they're doing their jobs well. Especially when Don's doing well by avoiding his tendency to be stubborn and stuck in the past. In this episode, we saw Don in his best form---the Don that he promised to be when wooing Roger, Peggy, and Pete over to a new company. He's Don that plays well with others, that takes advice, and is willing to set aside his own prejudices in order to embrace the new. Don't struggle this season is over whether he'll be left in the dust or if he'll find a way to stay young.

It's not just the dealings with the Japanese and the increasingly international markets that I'm talking about, either. Old Don was opposed to game-playing. Old Don's attitude was, "I was hired to do creative, and creative is what I do." The idea that he has to compete with other firms on any grounds except just having the best campaign would have made old Don furious. We saw a little of old Don when he was still spinning out about how he could win the Honda guys by doing some dazzling ad campaign and resisted the people who said that was a bad idea. New Don remembers that Pete Campbell is actually sharper than you'd think, and he bothers to take his advice by reading The Chrysanthemum and the Sword, and what he gleans from it works like a charm. But most importantly, new Don learns that his creativity can be applied to competition, and that he should stop resenting that young people are trying to sneak up on them, but take it as a challenge to be met head on.

Roger and Pete's battle was fascinating insofar as how obvious it seems that Roger is completely in the wrong. He's racist, he's threatening their financial futures, he's definitely wrapping himself in the flag because he's afraid of Pete. Roger can be contrasted with Don in this regard---instead of seeing competition as a chance to do a better job, he's retreating to "I'm older and I said so!" as a method of trying to exert control. Roger's behavior was particularly annoying as this episode dropped right in the middle of one of the ugliest racist episodes in America in at least my memory, with the racists in question also wrapping themselves in the flag and exploiting the tragic deaths of many to justify their racist attacks. Joan and Roger's argument was eerily evocative of the argument between liberals and conservatives on the Park51 project. Conservatives preen about how righteous they are in their hatred while engaging in base, childish behavior. Liberals are appealing to real righteousness, and suggesting that fighting is pointless if we can't enjoy peace and democracy. It was as if the writers of "Mad Men" knew what was going to happen, seriously.

I'm somewhat surprised that the writers didn't complicate Roger's reaction a little more, because so often they are critical of the emerging globalism and the creation of international companies that become less beholden to government control because they span nations. But it's kind of hard to hate Honda, who dominated the American market for the same reasons that old Don wants to win the battle for clients---pure merit.

The Sally storyline was, as usual, a marvel in the way that the writers can use a child to tell the story of the youth revolt that's beginning to form but hasn't really gotten to the point where it's considered a national crisis. This storyline was interestingly evocative over the way that gender and sexuality played into those tensions. The masturbation---and Betty's complete misunderstanding of why Sally was masturbating when and where she was---is the most obvious, of course. But the hair was what really captured my attention. Sally is a girl, and the battle is over her hair being too short, but all this is happening against a background where young men were letting their hair get longer and longer, and creating a genuine masculinity crisis with the older generation. It's somewhat hard for modern people to get how much anger there was over young men having long hair, but it's clear from materials at the time that men having long hair was considered literally one of the worst violations of social norms being committed by hippies. Gender taunting was a big part of the hippie-punching of the era---one thing straights would enjoy doing is pretending that they thought men with long hair were women.

Sally cutting her hair is a gender-reversed version of this, but it creates the same kind of consternation with her parents, particularly when it's coupled with her childish sexual experimentation. Sally is, simply put, rejecting the scripts for a girl. Betty makes it clear that she embodied those scripts to a T---spent all her time developing a feminine image perfectly pitched to attract male attention, but also suppressing her subjective sexuality. Betty's conception of female sexuality is basically that it exists for male consumption. For many seasons, we've seen Betty struggle with sexual dissatisfaction, first with Don neglecting her and then with a husband who seems to be a little annoyed when Betty acts like an adult who makes demands. But despite all this, the only possible reason she could imagine that Sally might play with herself is because she's acting out. What I liked about the scene where we actually see Sally do the deed is that she checks to make sure her friend is asleep. It's rash, childish behavior, but clearly she means no harm. Same thing with the hair-cutting. Sally has decided that Don is sleeping with the baby-sitter, who has short, hip hair, and she decides that's what she wants. And who can blame her? A 10-year-old is plenty old enough to absorb the fact that Betty is a stick-in-the-mud and that there's a far more interesting world out there. Plus, Sally was right. The shorter hair is cuter.

Usually, cutting off hair symbolizes the loss of power and sexuality. But in the 20th century in America, that usual narrative was hijacked and reversed for women. Cutting your hair all off was, depending on the fashion, often associated with independence for women, and independence for women created panic about "looseness". In fact, this is just the word that Betty uses to articulate her fears about Sally. Considering that Betty was born after the first panic about loose women with short hair---the 1920s---just drives home how wed Betty is to old-fashioned narratives, particularly now that she's basically married Daddy. When little blonde Sally takes her hair off with scissors, I was actually reminded of Mia Farrow cutting her hair really short in "Rosemary's Baby". In that movie, it works as a symbol of her character's subconscious longing to be free of what constitutes a Satanic patriarchy, where a bunch of old farts and sexists view Rosemary as an object to be controlled, and raped if necessary. That movie won't come out for a couple of years after Sally cut off her hair, but her act really anticipates that symbolism.

By the way, the whole scene where Henry uses the very child-rearing technique on Betty that he wants Betty to use on Sally in order to convince Betty to use it on Sally? Genius. Also, creepy. The way that Betty glows when he talks to her like a child is disturbing, but consider that Betty has made it clear that she never had a loving, indulgent family growing up. She's recreating the childhood she never had, while giving her own daughter the same awful childhood she did have.

*What did you think of Faye revealing that she isn't, in fact, married? Do you respect her choice to wear a ring, or is this just further evidence that she's scarily manipulative?

*Where do you think the Don vs. Betty battles over child-rearing will lead?

*Is Roger done for at SCDP? Do you think Lucky Strike will give up on them?

*Setting aside Betty's bad intentions, do you think that the therapy sessions with the child psychologist are a good idea or not?