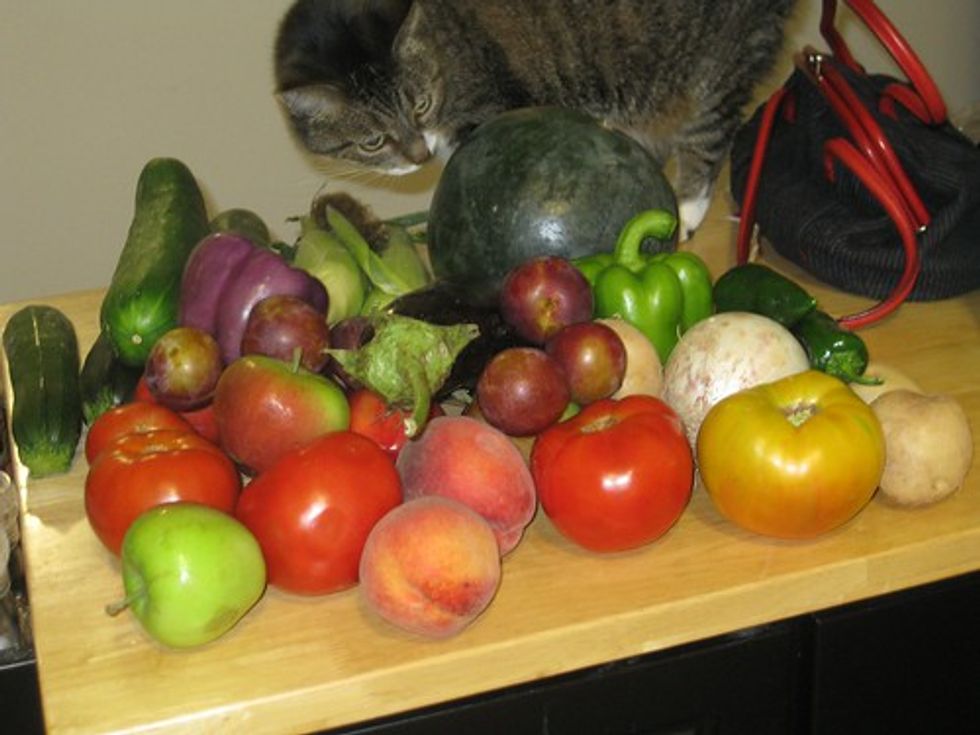 This was the week of extremes. I spent much of my day cooking on Saturday, but then the rest of the week kicked back and made simple dishes out of laziness. 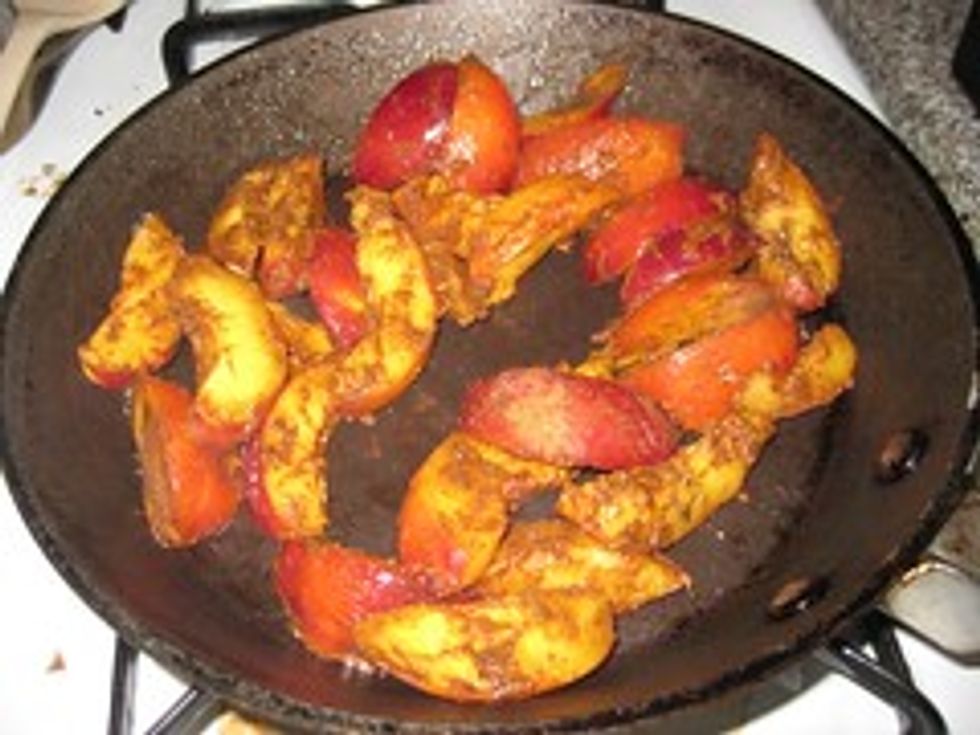 1) We had a bunch of nectarines left over, and they were starting to get wrinkly by Saturday, so I chopped them up, coated them in cardamom, cinnamon, cumin, black pepper, salt, and chili powder. Tossed them in the skillet. It only took like 5 minutes to cook. They were awesome. 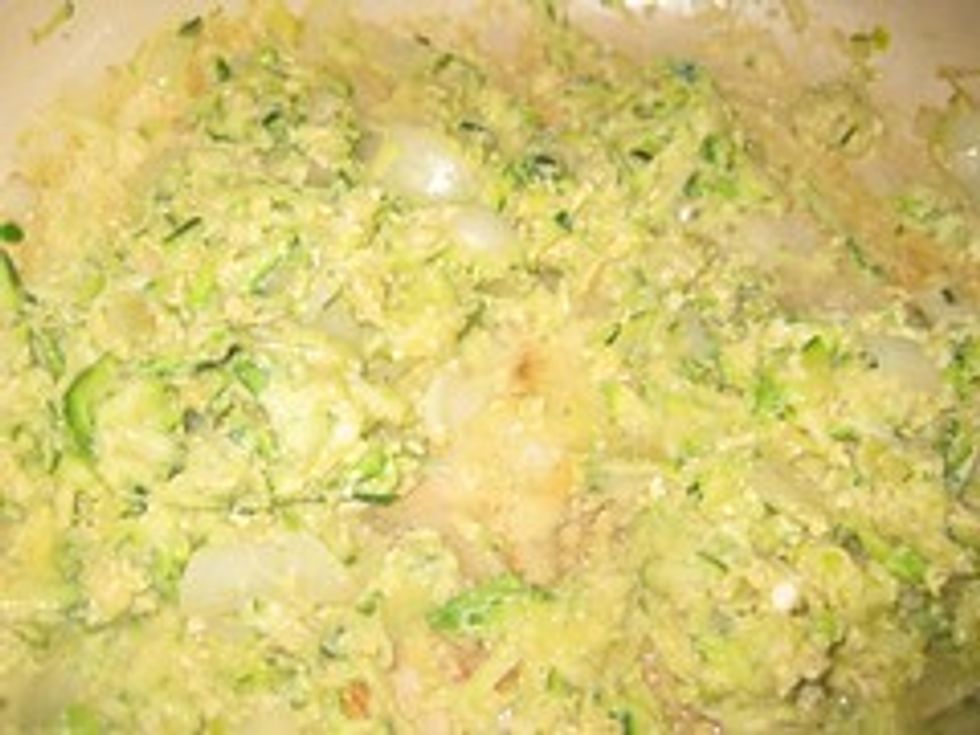 2) Grated one of the giant zucchini, chopped up an onion, and scrambled all that with four eggs and some garlic and chili powder. (Plus salt & pepper, of course.)

3) Toasted sourdough bread and sliced a tomato. Ate some eggs over this, but the rest were leftovers. Had some of the nectarines, but a lot were left over. 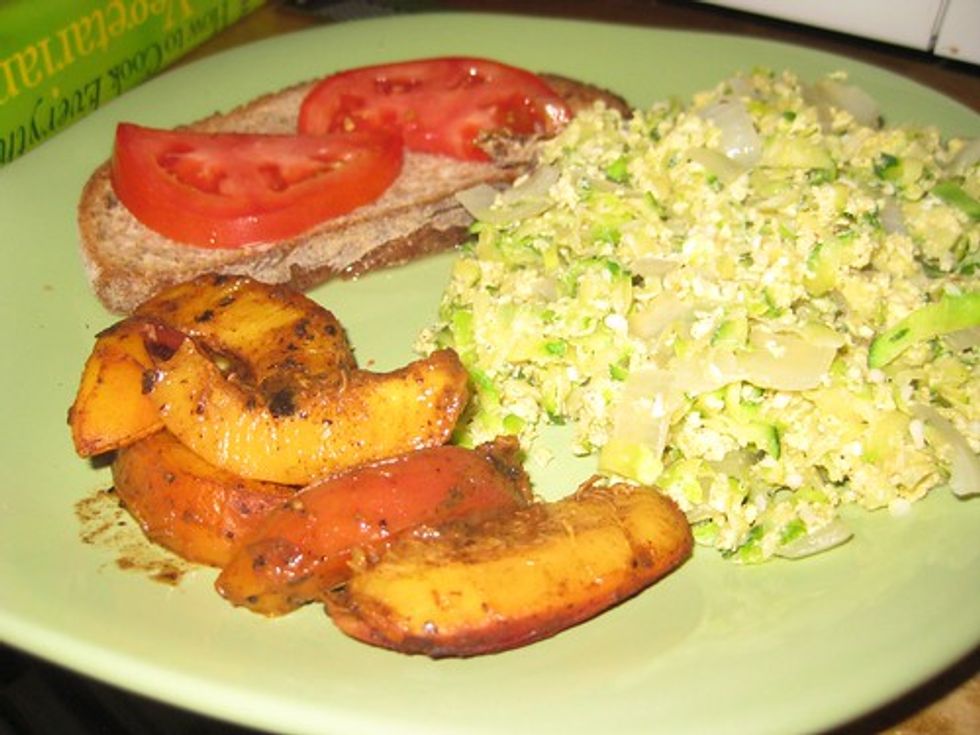 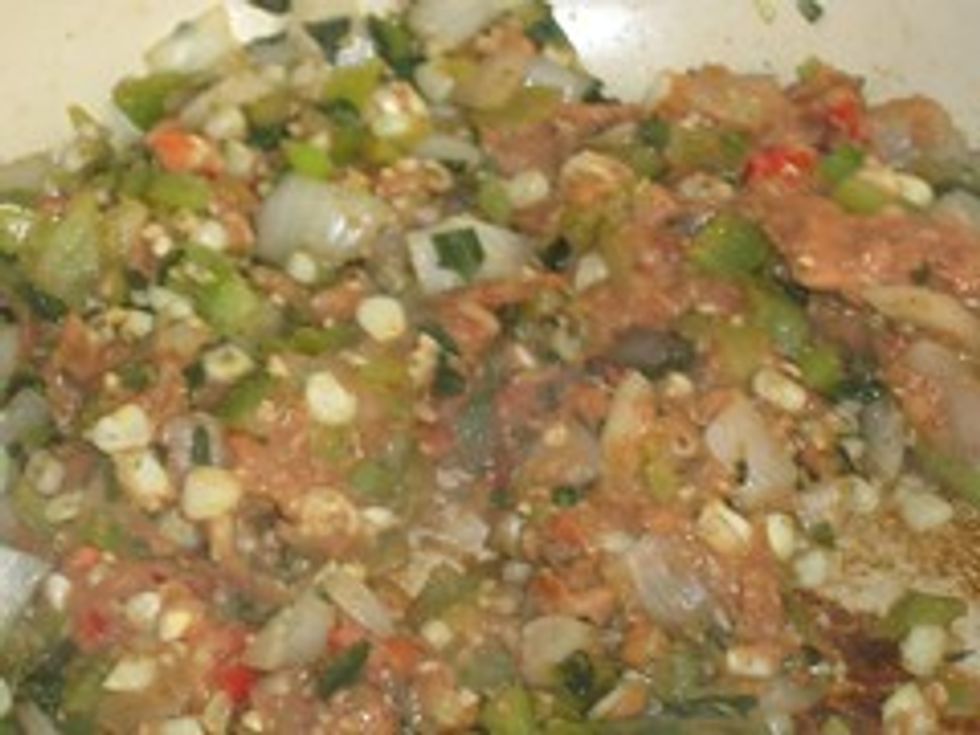 1) I had a theory about purslane, which is that it would cook a lot like nopalitos, i.e. it’s a succulent-ish plant, so it would have a lot of stickiness to it. Perfect for a filling. So I cut off the leaves, cut up the corn, added onions, the green pepper, and a couple poblano peppers. Put it on the skillet with garlic, cumin, and oregano. Mixed two of the hot peppers in with a can of beans, then added that to the mix. Turned off the heat, tossed in some shredded cheese, and mixed it all up.

2) Modified the zucchini bread recipe to make a cantaloupe bread with some of the cantaloupe in the fridge.

3) While the bread cooked, made empanada dough from Bittman’s recipe. While that sat for its requisite 20 minutes, washed dishes. Also had plenty of time for a bunch of girly facial care stuff, as well as reading blogs. Truly, it was awesome, if a bit warm in the kitchen. 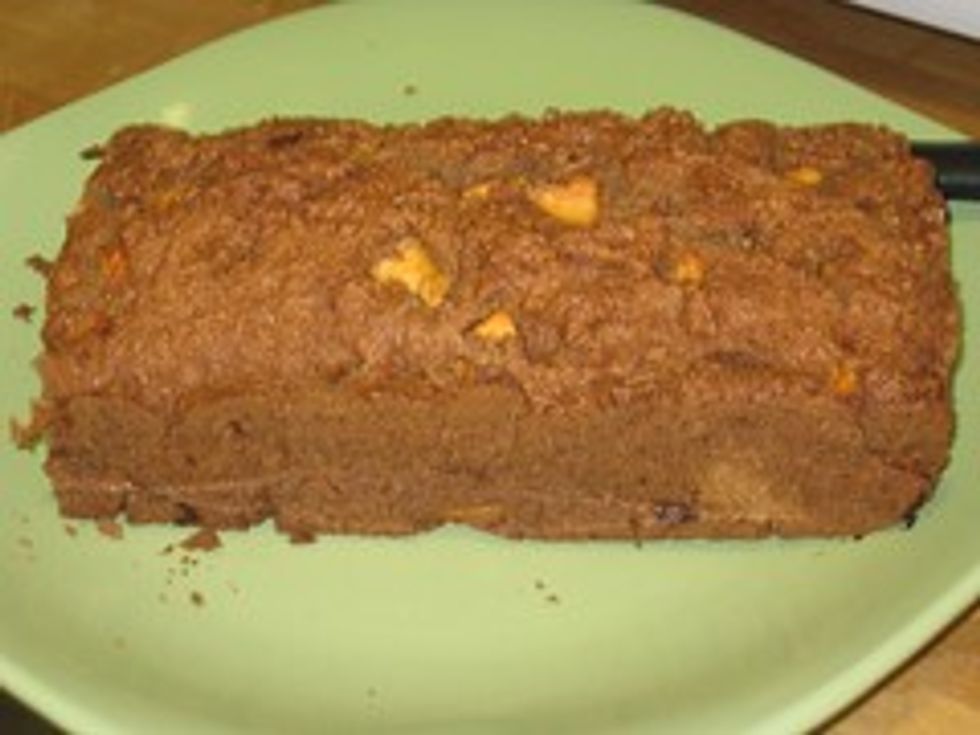 4) After the 20 minutes, made the empanadas by rolling out the little balls of dough, spooning filling in them, folding and sealing. While I did this, the bread finished, and I just cranked the oven up to 450. When I finished, it was good and preheated. I had filling leftover, which I kept to make a burrito later for a breakfast or lunch. While it cooked (20 minutes), I cleaned the kitchen and ran a bath.

Time: Two hours. Obviously not part of the “fast” goals of this project, but it was a Saturday afternoon, and it was really relaxing just cooking and not having to think too hard. But just the empanadas themselves didn’t take but an hour, and much of it was waiting around time that could be filled making side dishes, etc.

Eaten: On a picnic that we took to see Sharon Jones in Prospect Park. It was super good, and few empanadas were left over. 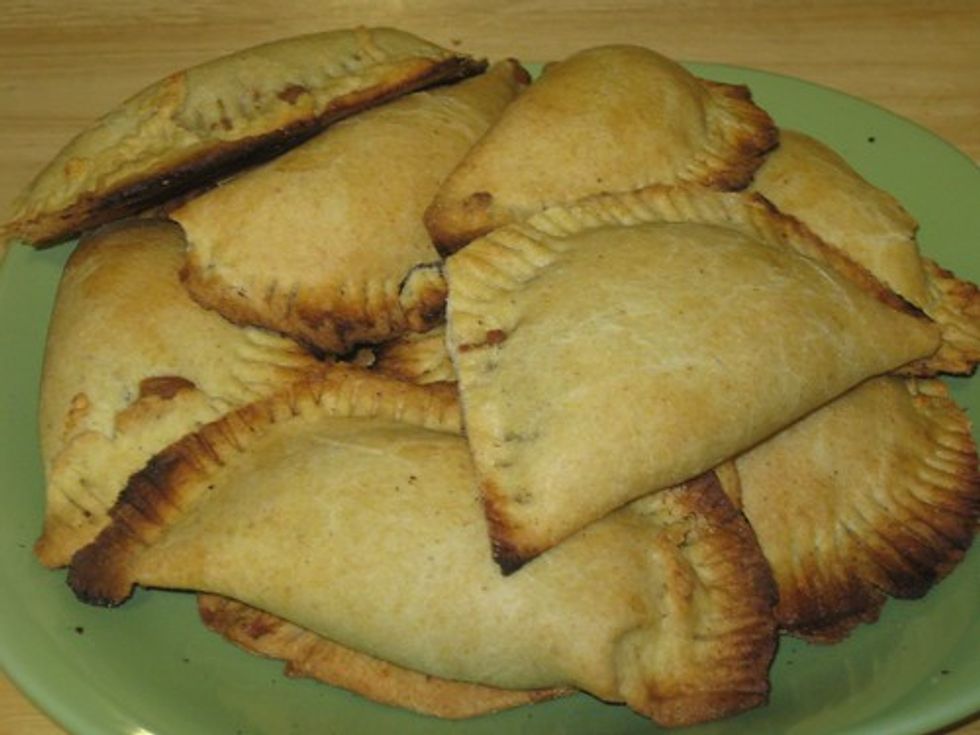 1) After all the heavy duty cooking on Saturday, went lazy for Sunday. Boiled a package of chick peas. Sliced up the potatoes and an onion, and sautéed all that with a little veggie broth. Added a couple of cups of the chick peas, plus garlic and some cumin, turmeric, and chili powder. (Put the rest in the fridge for later).

2) Sliced up zucchini, steamed it, served it with a little dressing and parmesan cheese.

3) Cut up the rest of the cantaloupe bread.

Soundtrack: Made a Genius mix from the Matthew Sweet and Susanna Hoffs cover of “Care of Cell #44” by The Zombies. Mostly it churned out the Kinks, Big Star, the New Pornographers, and, of course, Cheap Trick. 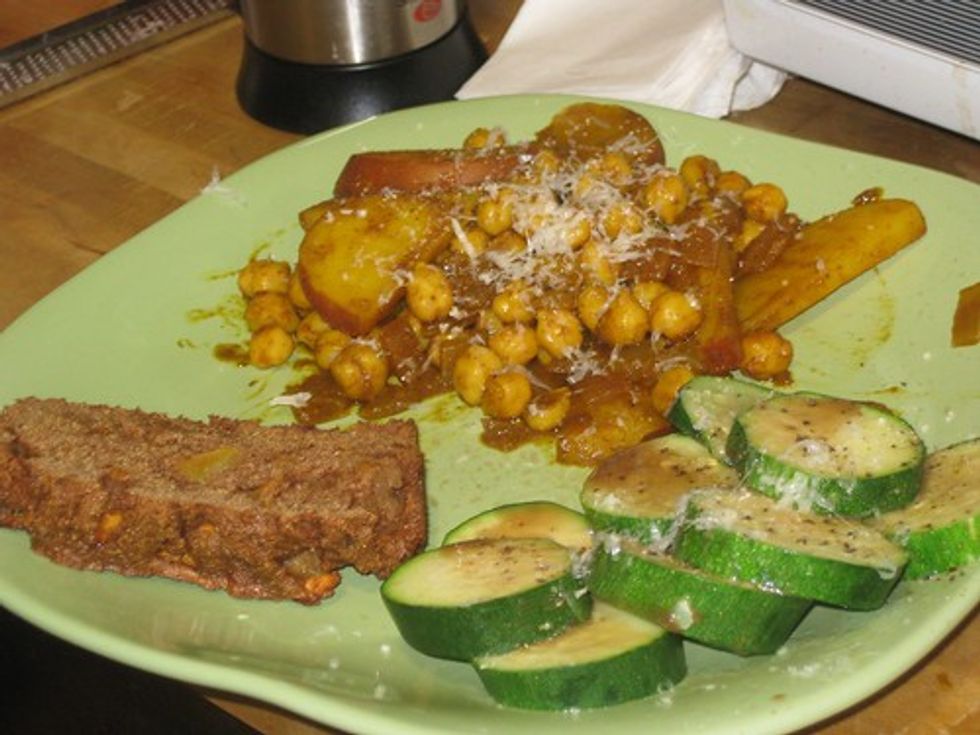 1) Made some bulghur wheat with a bunch of Moroccan spices: cardamom, cinnamon, black pepper, chili powder, and turmeric. Made it with veggie broth instead of just water. Once it was cooked, added some lemon juice and parsley, plus two cups of chickpeas. 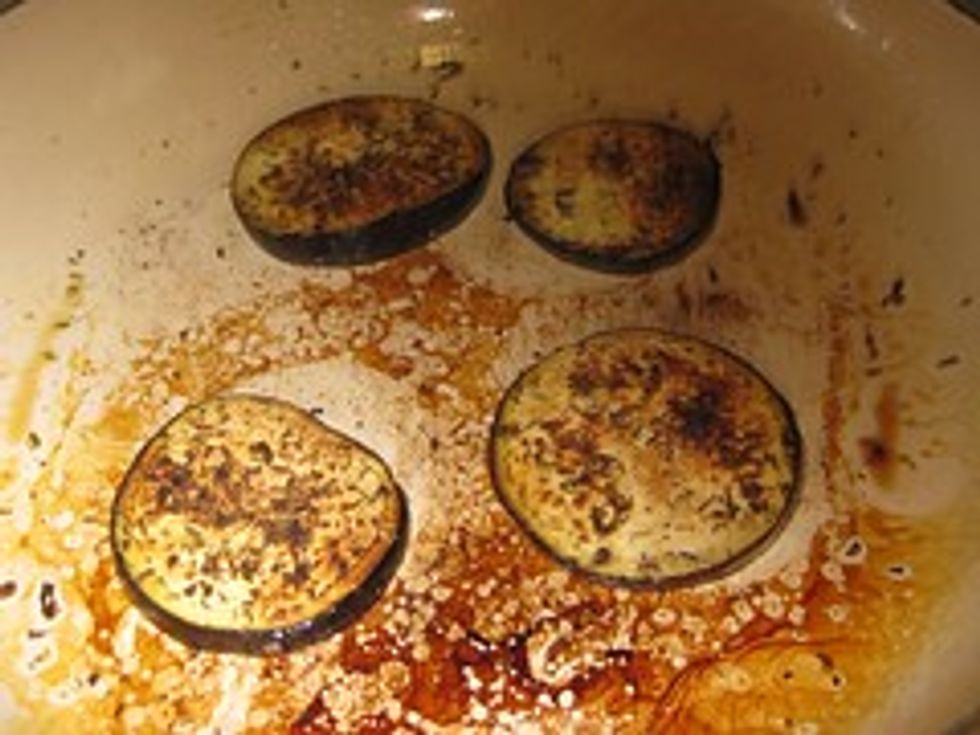 2) Sliced up four slices of eggplant. Pan-grilled them with some herbs and garlic salt.

3) Toasted sourdough bread I bought at the farmer’s market, put some sliced up Jarlsberg on there with a tomato, added the eggplant slices. A scoop of the barley and chickpea mix, and voila!

Soundtrack: Made Genius mix off The School’s “Shoulder”, which created a cheerful indie mix with stuff like the Vivian Girls, Deerhoof, and Love Is All in it. 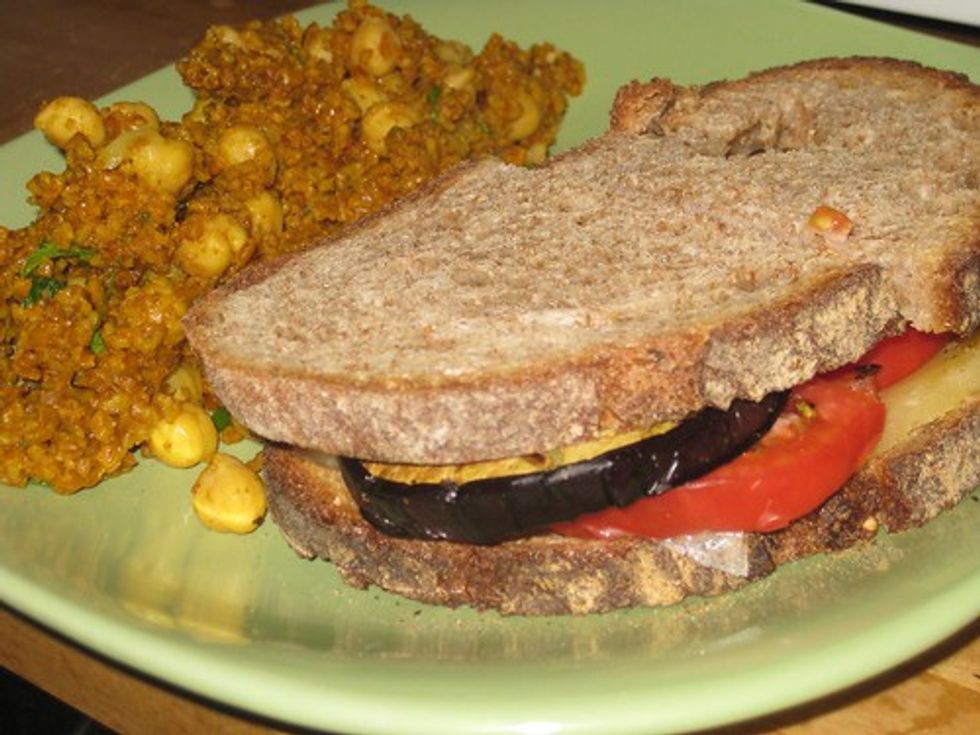 I’d had a busy, stressful day. Time for some easy to make comfort food. I still had some eggplant left over from the sandwiches, so on the theory that eggplant wants to be eaten with pasta, I cooked the eggplant with some onion and garlic in white wine. Turned off the heat, added some chopped up grape tomatoes and some basil. Tossed it with whole wheat spaghetti, added a little pepper, salt, and parmesan cheese, and was comforting myself with pasta in no time. I also toss Louisiana hot sauce on roughly everything, including this, but YMMV. 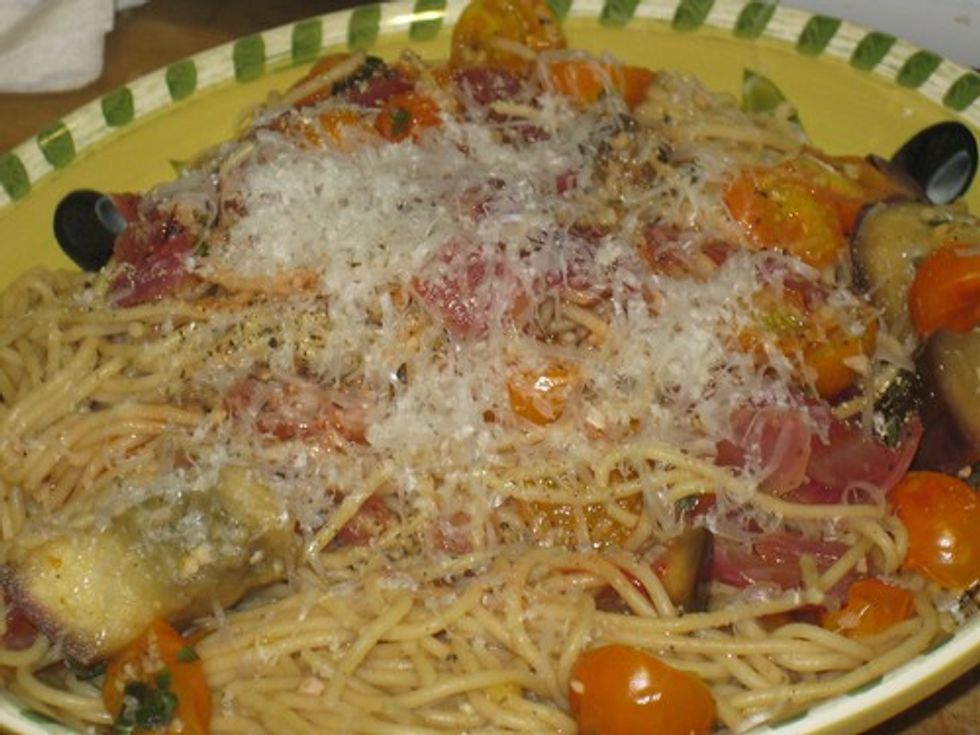 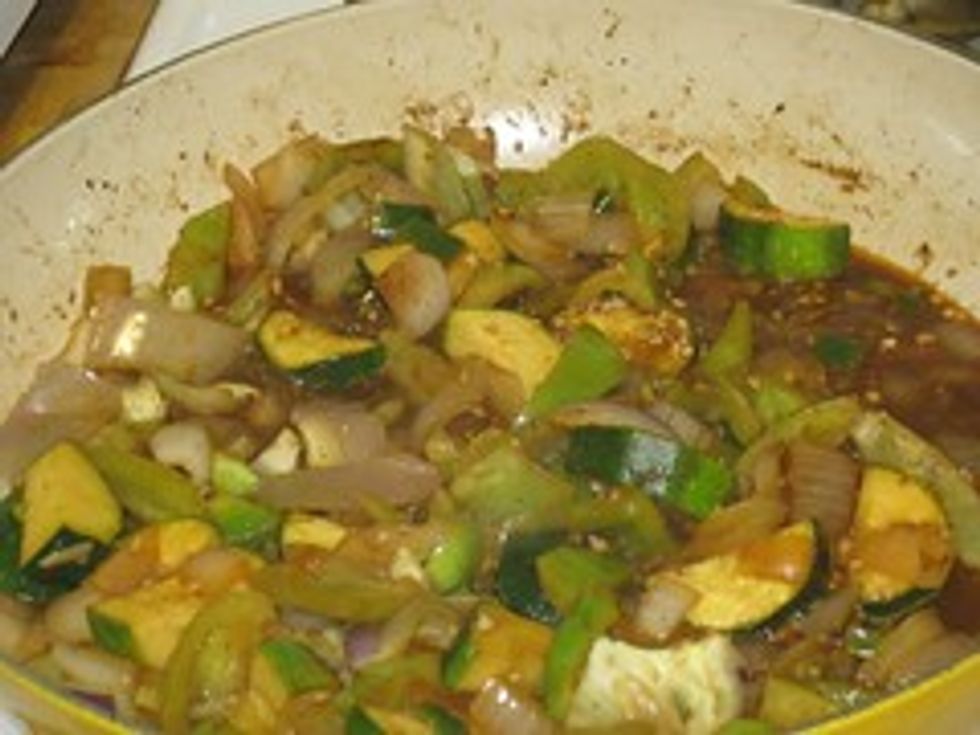 1) I was kinda tired, so I just ran to the grocery store and got some refried beans, sour cream and tortillas. Cut up the zucchini, onion, peppers, and jalapenos. Cooked them with some garlic, salt, pepper, cumin, and chili powder. Used a little veggie broth to keep the hot stuff from filling my apartment with eye-watering smoke. Ate them on the tortillas with the beans and sour cream.

2) Cut up the watermelon for dessert.

Soundtrack: Patti Smith, the ultimate pick-me-up when you feel low, as I kinda did.

Apologies for no pictures of the final meal. Rest assured, it was a burrito.