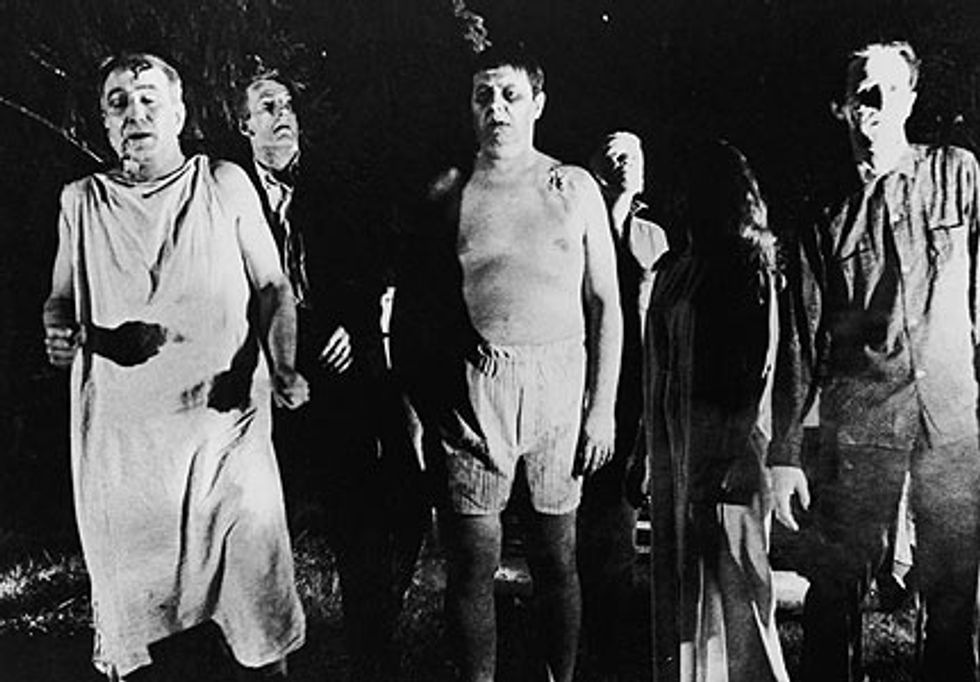 It's August. People are grumpy. It's time for extremely silly blogging based on this kick-ass article from Cracked about why a zombie apocalypse would fail. I'm a big fan of zombie apocalypse as a story, and I doubt many of these objections would reduce my enjoyment of these stories, since the answer for a lot of them is, "Magic, bitches." (Such as why zombies can fend off maggots, injury, heat, and the cold, and why zombie viruses would spread through bites.) But I have to admit, I laughed out loud for #2 and #1. Number 2 is basically, "It's not nearly as fucking hard to find zombie-proof spaces as the movies would have you believe." And number 1 touches on a reality that zombie stories basically all have to ignore.

As we touched on briefly above, if Homo sapiens are good at one thing, it's killing other things. We're so good at it that we've made entire other species cease to exist without even trying. Add to the mix the sheer number of armed rednecks and hunters out there, and the zombies don't even stand a chance. There were over 14 million people hunting with a license in the U.S. in 2004. At a minimum, that's like an armed force the size of the great Los Angeles area.

Remember, the whole reason hunting licenses exist is to limit the number of animals you're allowed to kill, because if you just declared free reign for everybody with a gun, everything in the forest would be dead by sundown. Even the trees would be mounted proudly above the late-arriving hunter's mantles. It's safe to assume that when the game changes from "three deer" to "all the rotting dead people trying to eat us," there will be no shortage of volunteers.

The number one cliche of zombie stories that makes me bananas is the, "Oh noez we're running out of supplies!" gambit. I've been reading The Walking Dead series, which is a very scary, very addictive horror comic. They get a lot of things right about what would happen if most of the country was wiped out by a zombie attack. For instance, I notice that many zombie flicks assume that we'd still have electricity for weeks and possibly months, when in fact there are actual people who keep power plants running, and so electricity would be the first thing to go. And right on the heels of electricity would be running water, since most water systems rely on the electrical grid. Robert Kirkman includes all these kinds of things, and he thinks of cool shit like holing up in gated communities or better yet, prisons.

But then he pulls out the card that makes me go nuts, the "oh noez, we don't have food or guns!" card. This is bullshit.

Why? Because the one thing you can be assured there would be plenty of if the vast majority of Americans ceased to exist would be a steady supply of canned beans and Doritos. The second thing there would be more than enough of would be ammo. This is because you and your small band of survivors would not be competing with a whole lot of people for these precious commodities. But in Walking Dead, they always seem to run across empty cupboards, and even though most of it takes place in the South, no one seems to think about stopping at a sporting goods store to wipe them out of literally more guns and ammo than you could ever use.

But they do seem to always get enough gas at the pump, a strange oversight because gas pumps also don't work without electricity.

I will say that in this sense, I really enjoyed the movie "Zombieland", because even though they incorrectly portrayed a working electrical grid, they were well enough aware that reducing the population by 90% would mean that you would literally never run out of Twinkies or guns. Or cars. (Though, of course, they, like basically every other zombie story out there, seem to have no problem pulling gas out of pumps even though the entire infrastructure that makes that possible would collapse.)

While this is all very silly, I do think there is an interesting political observation to pull out of all this. Zombie stories are a product of a society where most people literally do not think about, much less comprehend, how complex and interconnected everything is. Or huge. We have dark fantasies about what it would be like if that infrastructure collapsed, but it is so big and so complicated that even people writing stories where they have to imagine what that would be like struggle to really capture all the details. We don't think about stuff like, "If there weren't people at the power plant, I couldn't actually flush my toilet or pump gas." But nor do we consider how much food a grocery store really sells in a day compared to what any individual family's needs are. Trying to wrap your mind around all these different cogs and details about even just the way life runs in a mid-sized city is more than most people can really manage.